Everybody just chill out for a second. 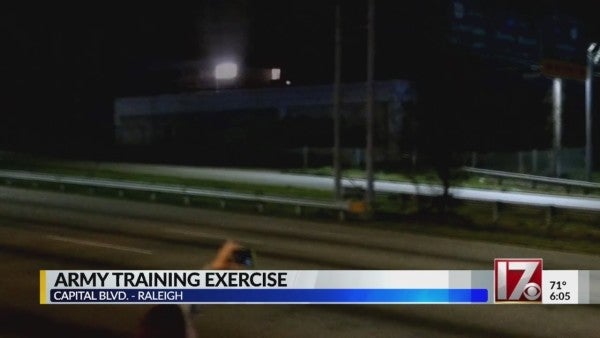 The Army has once again scared the hell out of some civilians with a military exercise — this time in Raleigh, North Carolina.

U.S.Army Special Operations Command led an exercise from 10 p.m. to 2 a.m. on March 28th at an abandoned hotel in Raleigh, but it ended up being “louder and more disruptive to the nearby neighborhoods than the city anticipated,” City Manager Ruffin Hall told the Army Times.

A classic misunderstanding — especially when you consider the warning flyer that the Army Times says was circulated via social media and posted around neighborhoods, which said the exercise would involve local SWAT units, “loud noises, helicopter flyovers and simulated weapons fire.”

Hall also told the Army Times that “the public is not generally or broadly notified prior to the event to avoid attracting large numbers of spectators.”

Around the same time near the end of March, USASOC was executing military drills over the Dallas-Fort Worth area, confusing residents and prompting the Dallas Morning News to get some answers.

Cmdr. Pat Coffey from the Naval Air Station Joint Reserve Base in Fort Worth said that the helicopters were addressing “a specific need, one that calls for a specialized operation,” the Dallas Morning News reported. He did not specify what that need was.

And lest we forget when the Night Stalkers freaked out Los Angeles in February, flying low through downtown and even landing in the street.

USASOC spokesman Lt. Col. Loren Bymer told Task & Purpose that in these exercises, safety is “paramount,” and they are “always coordinated with the local elected officials, the law enforcement agencies and property owners.”

“These environments add realism and greater training value to the Soldiers participating in the exercise. Safety surveys and risk assessments are thoroughly prepared before and during military exercises and training activities.”

SEE NEXT: SOCOM Could Test A Military Jet Pack As Soon As This Summer