Daniel Daddio, a 44-year-old Army veteran and law student, had a hell of a time at the Metallica concert in … Continued 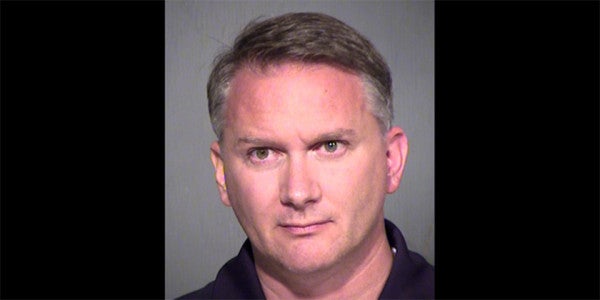 Daniel Daddio, a 44-year-old Army veteran and law student, had a hell of a time at the Metallica concert in Phoenix last week. According to police and local news reports, he also had a hell of a lot to drink, and when he needed relief, he just let it go… all over the husband, wife, and 10-year-old girl sitting in front of him.

Those are the facts of the case against Daddio, according to a probable cause statement by the Arizona state trooper who arrested him at Metallica’s gig at University of Phoenix Stadium Aug. 4, where the set list includedEcstasy Of Gold, Unforgiven, and Nothing Else Matters.

According to the statement, the father of the flushed family found stadium officials and told them that “all three of his family members felt warm liquid washing over their backs and legs.” It goes on:

When Mr. turned to see where the liquid was coming from he observed Daniel Francis Daddio standing behind them in the row of seats just above theirs with his out of his pants and in his hands.

Mr. said Daddio was urinating on all three of his family members. Mr. said he confronted Daddio concerning the urination on his ten year old daughter at which time Daddio just shrugged.

Well, don’t expect a guy to do the right thing after he’s already got his out of his pants and in his hands, I guess.

Police confirmed Daddio’s Army service in their report. A Rally Point profile in Daddio’s name identifies him as a former “Special Forces Senior Sergeant” with a final rank of master sergeant. A people search turned up several former addresses for Daddio in the Fayetteville, North Carolina, area — outside Fort Bragg, home of the U.S. Army Special Operations Command.

Far from the home of Special Forces, Daddio said little in his first court arraignment in Arizona Aug. 8, where the judge called the case “one of the most disgusting scenarios I’ve ever read.

“I don’t know if you were just completely, I don’t want to use the word, I’ll just say drunk,” the judge told Daddio in the video-recorded arraignment, published by CBS5-AZ. “And I don’t even know if you know what you did. But in any event… really inappropriate.”

Daddio faces a misdemeanor charge of disorderly conduct, a felony charge of indecent exposure, a very low likelihood that he’ll ever get admitted to the bar, and some tough questions at the next Fort Bragg reunion.