Beijing has been producing a new force of noncommissioned officers over the past decade. 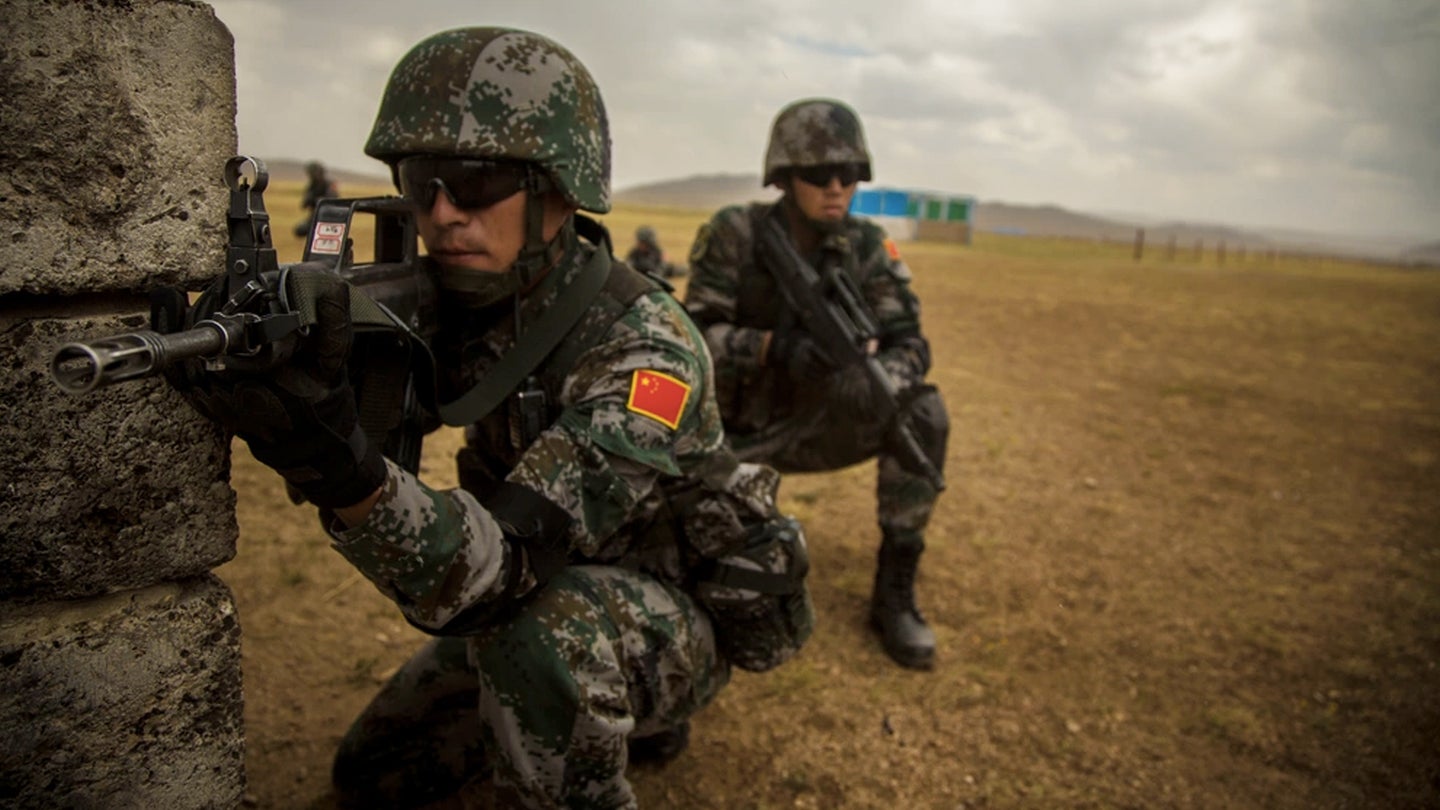 Here in the good ol’ U.S. of A, the military likes to mold noncommissioned officers — the sergeants and petty officers who keep the armed forces running — in the jaded wisdom and disillusioned bitterness that comes from years of herding junior enlisted service members and officers in order to make things work kind-of-okay most of the time.

But for the past 10 years, the Chinese People’s Liberation Army has been trying something different: sending high school graduates to school for a few more years before getting them back as newly-minted noncommissioned officers to guide younger service members through the increasingly-technical equipment of its modernizing military.

The so-called “made-to-order” NCOs are meant to help the PLA transform its enlisted force from being largely unskilled and poorly educated to one filled with career service members who can operate sophisticated weapons and equipment, wrote U.S. Air Force Master Sgt. Daniel Salisbury and security researcher Kenneth Allen in a paper for the China Aerospace Studies Institute. A U.S. Air Force initiative, the institute is dedicated to studying the PLA’s growing capabilities in air and space.

“[I]n recent years the PLA has acknowledged that its NCO corps still lacks higher education and technical skills, and that this problem will become more severe as increasingly modern weapons and equipment place higher demands on personnel,” wrote Salisbury and Allen, who served as research director of the Institute for several years. “The ‘targeted training NCO’ program is aimed at alleviating this shortfall.”

The PLA is right to focus on developing good NCOs. Experts say a lack of them in the Russian ranks partly explains why the Russian military has performed so poorly in Ukraine since it invaded in February.

“Without my NCOs, it’s impossible for me to be able to effectively lead my team,” retired Army captain and Medal of Honor recipient Flo Groberg told Task & Purpose in March. “I wouldn’t have the right guidance, I wouldn’t have the right expertise and leadership on the team to be able to motivate, track, and really do the impossible for our soldiers. They’re the connective tissue to the mission.”

Though officers put the plans together, it’s the noncommissioned officers in a unit who implement them, explained Clint Romesha, a fellow Army veteran and Medal of Honor recipient. Instead of having a tradition of older enlisted leaders who are empowered to make decisions in combat, as the U.S. military does, the Russian military relies on conscripts who typically serve for just one year before getting out, according to the Institute for the Study of War.

The conscription model “had no real career path” for troops, wrote Army Maj. Charles Bartles in an article for Army University, so NCOs “either left the service or became commissioned officers.”

China’s targeted training NCO program seems to be designed to avoid that problem. Launched in 2012, the program enrolls recent high school graduates in a three-year program that includes 2.5 years of study at a civilian polytechnic or vocational college. Throughout that time, the cadets wear military uniforms, stay in dedicated dormitories, and are subject to “quasi-militarized management,” according to the research paper.

After graduating, the cadet then undergoes six months of military training, including basic training and some specialty training. Once that is done, the cadet starts five years of service commitment as a corporal, the lowest NCO rank in the Chinese military.

The program is a sweet deal for young Chinese men and women who want the government to pay for training in a technical field. It also provides a more secure path to a stable government career, according to the research paper. Most junior enlisted Chinese service members are demobilized after their two-year initial service commitment, but with a five-year service commitment and technical training to boot, the ‘made-to-order NCOs’ are presumably better able to stay in the service, rise through the ranks, and have a good chance of being placed in a government job after 12 years of service, wrote Salisbury and Allen. It also effectively allows cadets to choose their military service and specialty, a luxury that traditional recruits may not have.

“[T]he targeted training NCO program may be partially intended to broaden the appeal of the PLA to a new segment of ambitious students (and parents) with a promise of specific educational and career opportunities,” wrote Salisbury and Allen. “In this way, it might be considered part of an overall suite of recruitment programs meant to appeal to eligible members at different life stages rather than just an attempt to develop a single, most effective method to produce technically-minded NCOs.”

You might be thinking: technical training is great, but how will these wet-behind-the-ears NCOs earn the respect of their troops when they don’t have the weary years of sleep deprivation and bitter disappointment that make American NCOs so salty and powerful? That concern is valid: along with targeted training NCOs, the Chinese military also directly recruits NCOs straight out of technical schools, without the years of quasi-military habits that targeted training NCOs enjoy. From anecdotal scans of internet forums, the research paper authors found that NCOs who were directly recruited “often had trouble adapting to military life, struggled to earn respect from both junior and senior enlisted members, and often their technical knowledge did not match up well with their duties,” they wrote.

“Indeed, a 2018 report on [People’s Liberation Army Air Force] targeted training NCOs revealed that only 11% of these NCOs had become squad leaders, while 60% had become technical experts, indicating a preference for them to fill technical positions over leadership ones,” wrote the paper authors.

The made-to-order program is also not meant to replace the traditional method of growing NCOs, most of whom will still come from the junior enlisted ranks. But even if the made-to-order NCOs are not as good as traditional ones, the longer service commitment benefits the PLA, which may be struggling to meet recruitment quotas, the paper authors said.

“This is even more true for the more technical positions this program aims to fill, where it may be especially difficult to maintain qualified personnel with only two-year commitments,” they wrote.

In any case, the targeted training program is a popular one. After starting with just a few hundred cadets in 2012, the program grew to accept over 20,000 students in 2020. Some of the most popular specialties that the cadets train for are modern communications technology, computer network technology, aircraft electromechanical equipment repair, and marine engineering technology.

Though “made-to-order NCOs” might sound contrary to the tried-and-true American process of carving NCOs out of chewing tobacco and old coffee grounds, a similar program might emerge here, too. In November, Marine Corps Commandant Gen. David Berger called for allowing civilians with critical skills to join the service without starting at the very bottom as new recruits.

“The rapid rise in importance of the cyber domain, for instance, has challenged us to find creative ways to quickly build critical skills at mid-career and senior levels,” Berger wrote in his radical Talent Management Plan. “Unless we find a means to quickly infuse expertise into the force – at the right ranks – I am concerned that advances in artificial intelligence and robotics, among other fields where the speed of technological change is exponential, will force us into a reactive posture.”

Berger clarified that the option would be limited to certain military occupational specialties, saying that it would be “difficult to imagine a scenario” in which a civilian could skip boot camp in order to join a combat arms field like infantry or artillery.

The Chinese military is not the only one struggling to retain enlisted talent. In 2019, the Government Accountability Office found that the U.S. Air Force had been bleeding experienced aircraft maintainers for nearly a decade, which contributed to a “heavy workload and undesirable working conditions,” and a substantial knowledge gap.

Though the service implemented the Government Accountability Office’s recommendations to improve its retention of maintainers, posts about burnout and unsustainable workloads appear nearly every day on unofficial Air Force social media pages on Facebook and Reddit. In April, the Air Force announced up to $20,000 bonuses for recruits to sign six-year contracts in technical fields such as linguistics, aircraft maintenance, cyber operations and “any mechanical or electrical aptitude.”

“The targeted training NCO program can be expected to continue and possibly expand even further in the coming years as the PLA continues its push toward basic military modernization and then a world-class military,” the paper authors wrote.