The pugil stick simulator is part of Marine recruiting events that also include ammo can lifts and pull-ups. 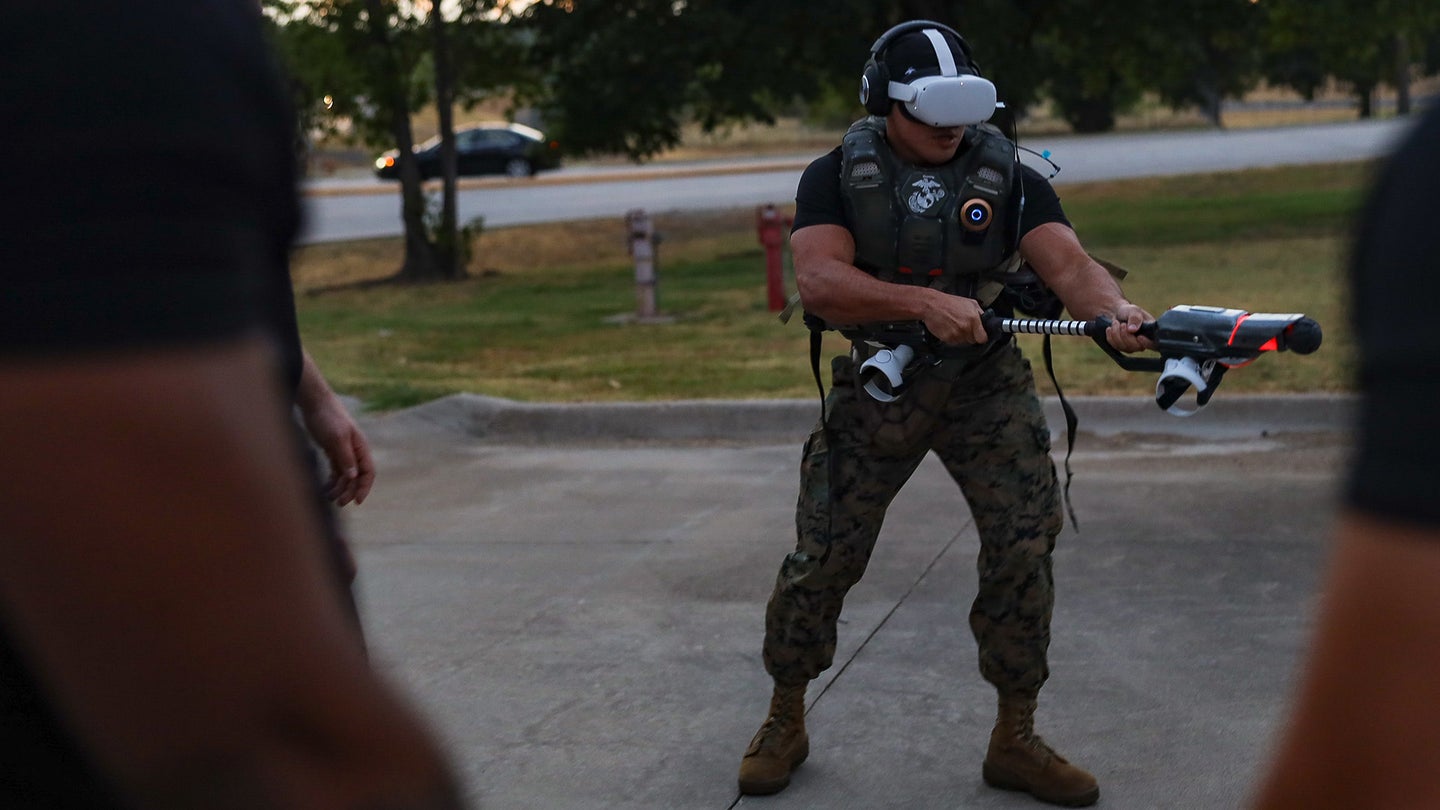 Few events capture raw aggression more than pugil sticks, a rite of passage for Marines at boot camp that involves two recruits trying to clobber each other with padded pole weapons whilst their brothers or sisters and arms cheer with each hit.

Looking at the foam-covered carnage, one might be tempted to recall Theodore Roosevelt’s famous quote about “The Man in the Arena,” or the now defunct television show American Gladiators, both of which capture the brutal intimacy of hand-to-hand combat.

Now the Marines are simulating the pugil stick experience to give people interested in joining the Corps a taste of what they would do in boot camp.  Earlier this month recruiting station commanders tested out how to use the pugil stick simulator as part of Battle Position, a mass recruiting event that also includes challenging potential poolees to max out their scores on pull-ups and ammunition can lifts, according to the Defense Visual Information Distribution Service.

The Aug. 11 event was held at Naval Air Station Joint Reserve Base Fort Worth, Texas, and included Marine recruiters from Texas, Arizona, New Mexico, Colorado, and Utah. One image from the event shows a Marine wearing a virtual reality headset and wielding what looks an awful lot like a Klingon pain stick.

The pugil sticks simulator allows potential recruits to use Oculus Quest 2 gaming technology to battle a virtual opponent, said Alan Whitley of the marketing agency Wunderman Thompson in an August 2021 video about the simulator.

“I’m an old man, I feel like, but it was a blast getting in there and getting to do battle,” Gunnery Sgt. Jacob Fuller, a Marine recruiter, said in the video. “It was pretty awesome. I can’t wait to do it again.”

It is possible that other Marines as well as grizzled veterans may not be impressed by virtual pugil stick fighting. Indeed, taking the violence out of pugil sticks is a bit like giving a Dodge Charger an electric motor.

But retired Marine Master Sgt. Tony Villa, who served as a recruiter from 1994 to 1997, said he believes that the pugil stick simulator can be a useful tool for the Marine Corps to reach out to qualified young people.

When Villa was a Marine recruiter, he only had a few options to get attention for recruiting events, such as pull-up challenges, videos, and local airshows, he told Task & Purpose on Monday.

“I think that virtual pugil sticks are a great idea: A good way to ‘feel’ it without getting your mouthpiece knocked out,” Villa said. “It’s probably a great cardio workout as well. The population that the recruiters are trying to reach in 2022 are well versed in this type of tech and I think it’s a great way to start the conversation.”

Former Marine Cpl. Scott Whisler also said the pugil sticks simulator sounds like an interesting idea, but nothing can simulate the disorienting experience of taking a hit to the head or body, even when you are wearing protective equipment.

“It can’t replicate the jarring of the arms when striking your opponent either,” said Whisler, a contributor to Task & Purpose’s Gear section. “While it would be a fun and exciting experience, it would potentially set up recruits for failure.”

Whisler said nothing could have prepared him for pugil stick fighting short of actually doing it. While pugil stick competitions may look as though they resemble football drills, they are actually far more chaotic, he said.

“In 2006 we had to wear a soft padded helmet, similar to those worn by boxers, and a padded chest plate,” Whisler said. “I remember locking my hands onto the pugil stick via the built-in gloves, nervous as all hell when it was my turn. Any plan or strategy I had went out the window immediately as my opponent swung wildly. So, I swung as hard as I could as fast as I could hoping to create distance and land as many solid strikes as I could. It was equally riveting and disorienting.”

Former Marine Lance Cpl. Peter Schaub said it might be more realistic – and perhaps cheaper – if recruiters had people use pugil sticks to hit mannequins or another physical target.

Schaub, who admitted that he despised pugil stick fighting, also asked who the target audience would be for this pugil stick simulator.

“The Marines have been able to (mostly) meet their recruitment goals when other branches fall flat because they lean into the ‘toughness’ aspect,” Schaub told Task & Purpose. “Does this experiment fit the bill? I don’t think so.”

Ultimately, the Marine Corps – and other services – need more than gimmicks to attract recruits, Schaub said. The military branches need to make institutional changes to remedy longstanding issues, such as poor housing and the lack of any sort of work/life balance, he said.

“Potential recruits have seen the way the government has failed Vietnam vets, and now Iraq and Afghanistan vets,” Schaub said. “They are hesitant to put themselves through the same bullshit. “So, in the end, these toys might be fun for potential recruits to play with, but they’re not convincing anyone to join.”