No matter the war we honor the fallen just the same. 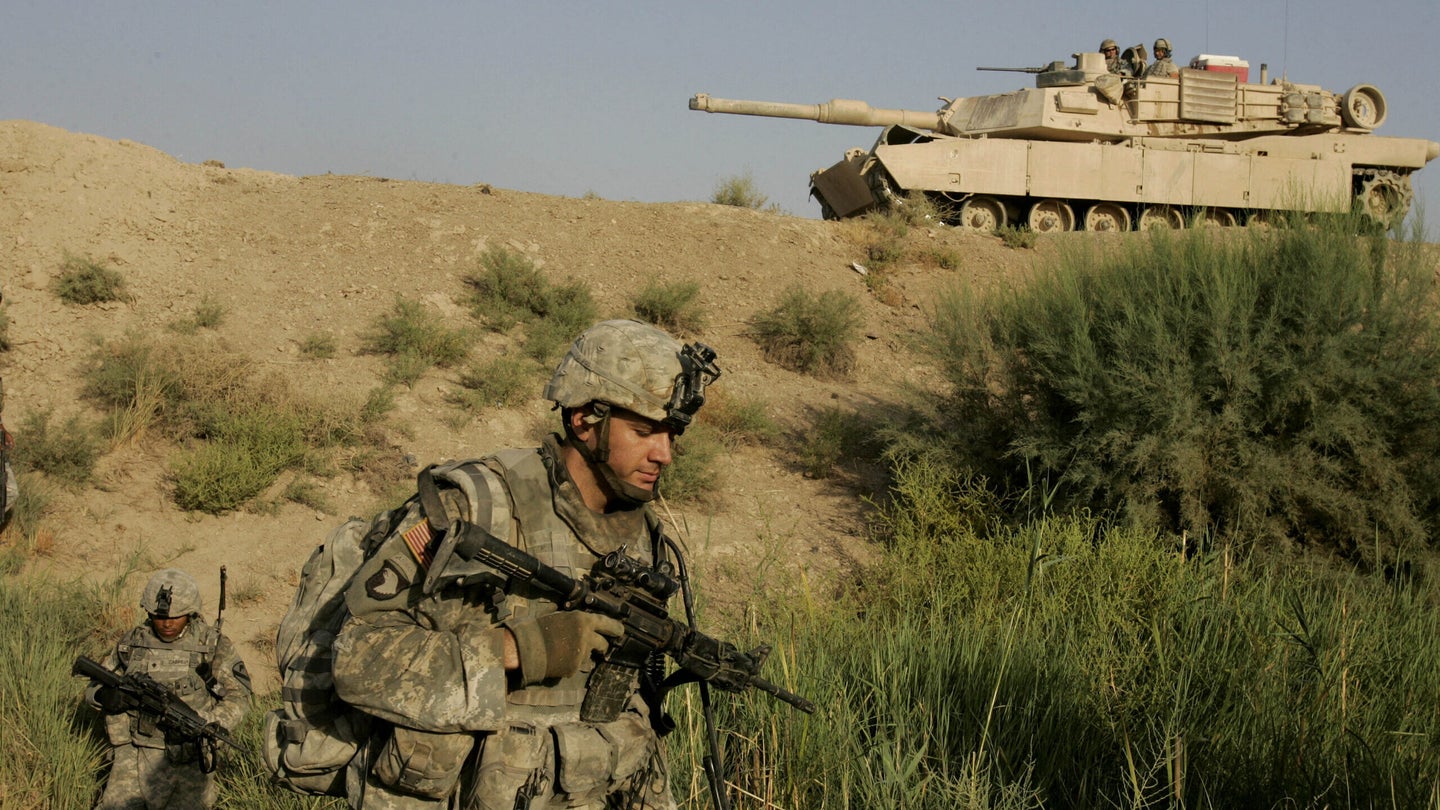 A U.S soldier from Bravo 1-12 Cav. Battalion walk past an Abrahams tank during operation Wickersham 3 near the city of Baqouba, 60 kilometers (35 miles) northeast of Baghdad on Friday, Sept, 7, 2007.Operation Wickersham 3 was held over 40 hours to flush out suspected insurgents in the Baqouba area. (Karel Prinsloo/AP).
SHARE

I’ve been in Bali, Indonesia — a bohemian enclave and surfer’s paradise replete with vegan restaurants, cafes, shops and beach clubs — for the last couple of months now. One of the things that struck me as curious when I first got here was the large number of Russians who’ve come to inhabit the place. Some are here for short-term holidays, but many others live here full-time and have even opened up restaurants and other businesses.

A novice Russian speaker myself, I began a conversation with a friendly Russian girl, Elizaveta, in a cafe one afternoon to keep my language skills fresh. When she asked where I’d learned Russian, and I explained to her that, in a former life, I’d lived in Ukraine, the country in which her own nation was now actively engaged in a brazen war of reconquest, she blushed.

Not wanting her to feel uncomfortable or ashamed, I recounted a story of when I was a younger man, on a different adventure — this time in London in March 2003 — the same week the United States, along with the U.K. and other members of the “Coalition of the Willing,” invaded Iraq on the pretense that it harbored weapons of mass destruction (WMD) and had plans to use them against targets in America and elsewhere in the Western world.

In the bar of the hostel I’d stayed at, I suddenly found myself defending my country’s honor in heated debates with incredulous Europeans who couldn’t fathom how and why the United States would engage in such a reckless campaign in the Middle East, and whose justification for such an act was dubious at best.

I tried to explain how keyed up we Americans were in the aftermath of the 9/11 terrorist attacks, and how we weren’t taking any chances with potential bad actors like Saddam Hussein, but they weren’t buying it.

It was a difficult position to take, defending America’s credibility after what is now almost universally understood to have been a calamitous moral transgression and the worst foreign policy decision of a generation.

“But I still loved my country,” I explained to Elizaveta.

“Yes!” she responded intensely. “I understand what you mean. I hate this stupid war with Ukraine, but I’m still Russian, and I love my country, too!”

I went on to tell her that a few years after my London trip, I’d found myself in the rugged hills of Eastern Afghanistan, a Navy corpsman (medic) attached to an Army advisor team trying to help mentor a military unit of the fledgling Afghanistan National Army.

I tried to explain that this war, my war, was different from the war in Iraq. It had begun with noble aspirations — to avenge the slaughter of nearly 3,000 Americans in New York City, Washington D.C. and Stony Creek Township, Pennsylvania — but over time, it had become an unbelievably expensive quagmire with no end in sight and no clear image of what victory might look like.

Troops rotated in, took and returned fire, walked around villages and through poppy fields, drank tea with village elders, ate chow, went on the internet, made phone calls, held ceremonies for comrades killed in action, and did a lot of other things that had no real long term impact, then rotated back at the end of their tour just as a new batch was getting settled in.

It went on like this for 20 years until the end came swiftly and mercilessly. Taliban fighters, many of whom hadn’t even been born at the time of the September 11th attacks, swept into Kabul and began an awkward stand-off with the U.S. and other coalition forces who’d barricaded themselves inside Hamid Karzai International Airport as throngs of desperate Afghans risked their lives trying to get inside and onto one of the departing aircraft.

In the midst of this chaos, a suicide bomber associated with ISIS-K — the notorious terrorist organization’s Afghanistan affiliate — detonated an explosive vest in a crowd full of people packed in tightly, killing 13 U.S. service members (including a Navy corpsman) and at least 170 Afghans who were trying to escape. A final insult to mark the end of our longest war.

Not to be outdone, we responded in kind with a strike of our own against what we thought at the time was a vehicle containing members of the ISIS-K cell that had perpetrated the suicide attack outside the airport. Turns out, our intel was off. Instead, we struck a car loaded with Afghan civilians, at least one of whom had worked for our ally the Afghan government, killing 10, including seven children.

Such is the legacy of our time in Afghanistan. Noble intentions gave way to hubris, greed, incompetence, fatigue and ultimately, failure. So much time and effort, blood and treasure, all for nothing.

The same is true for Iraq where the body count was higher on both sides. After a relatively brief but intense period of brutal house-to-house combat and IED strikes against our Humvees, then later, our MRAPs, we finally pulled our forces back in the early 2010s. However, it did not take long before ISIS carved a caliphate out of swathes of Iraq and Syria, implementing the strictest interpretation of the Shariah that the world had seen in several hundred years. Eventually, the caliphate was mostly destroyed, but Iraq — though much more peaceful now — is still recovering from a generation of warfare.

Such is the legacy of our time in Iraq.

Unlike the war of my grandfather, who fought in a tank unit and celebrated victory over the Nazis with his fellow soldiers in Germany, the wars of Iraq and Afghanistan are a source of heartache and bewilderment for many veterans, myself included. What was a defining moment of my life, ended — albeit a decade and a half later — not in victory, as it had for the Greatest Generation, but in defeat.

And yet, a stubborn pride within me persists. I’m proud that I served my country in wartime, that I braved IEDs, rocket-propelled grenades and small arms fire, that I rendered medical aid to severely wounded comrades, that I carried the remains of a soldier to an LZ and passed them off to a MEDEVAC crew chief.

Iraq was a mistake. Afghanistan, though begun with noble intentions and actions, devolved into a morass that too few of our leaders were willing to walk away from, which ultimately ended in failure. But on balance, America remains a force for good in the world, and a beacon of hope. That’s why the protestors in Hong Kong waved our flag and sang our national anthem when they protested against Chinese authoritarianism, just as Ukrainian soldiers fired the weapons we gave them at the advancing Russian army.

When Memorial Day rolls around, I think about Sgt. Jan Argonish and Master Sgt. Scott Ball, comrades of mine who were killed in an ambush in Kunar Province, Afghanistan 15 years ago. And I think about the hundreds of thousands more who were killed in Iraq and Afghanistan and elsewhere over the past 20 years. But this year, I’ll also remember Willy Cancel, the former Marine infantryman-turned-volunteer to the Ukrainian Territorial Defense force, who was killed in Ukraine last month while fighting against the Russian invaders. Willy stood up for what was right and sacrificed his life so that others may live. His actions define the values of the Marine Corps: Honor, Courage, and Commitment.

Back in the cafe, to assuage Eliziveta’s feelings of guilt and perhaps to understand my own conflicted sense of honor better, I said, finally, that we are not defined solely by our countries’ episodes of unimaginable cruelty, this dark moment in human history is temporary, and there’s a light at the end of the tunnel.

Memorial Day is about remembering those we have lost in the wars our country has waged since its founding. Many of those wars were morally justified, and many were not, though we honor the fallen just the same.

After returning home from the First World War a changed man, in many ways disillusioned but also imbued with a greater awareness of the preciousness of life in general, Ernest Hemingway wrote, “The world is a fine place, and worth fighting for…” Who could argue with that?

Brandon Caro is the Contributors Editor at Task & Purpose and author of the novel, Old Silk Road. A former Navy corpsman (combat medic), he deployed to Afghanistan in support of Operation Enduring Freedom in 2006-2007. His work has appeared in The New York Times, The Daily News, The Daily Beast, among other publications. He resides in Austin, Texas.