Update, 10 AM EDT, April 26:Representatives for USAA and First Command Financial Services told T&P; that their banks will be offering... 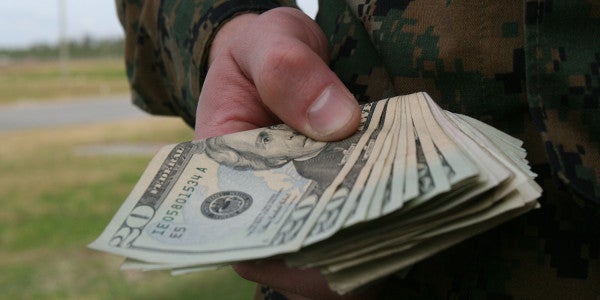 Update, 10 AM EDT, April 26:Representatives for USAA and First Command Financial Services told T&P; that their banks will be offering similar protections to Navy Fed for its DoD employee members. Scroll to the end of this story for more details.

So, did all those early-morning financial briefings and gameday TV commercials browbeat you into opening a Navy Federal Credit Union account, like so many GIs who came before you? If so, there’s good news: A potential government shutdown won’t leave you penniless on weekend liberty.

Navy Federal announced this week that it will offer to cover its members’ direct-deposit service pay even if it gets disrupted by a shutdown, which has loomed over budget talks in Washington. “We’re here to help our members during periods of financial difficulty,” the credit union said on a webpage touting the assistance.

If Congress and President Donald Trump can’t agree on a new round of funding for the government by Friday, the federal Treasury will run out of cash, and federal services will cease, including pay deposits to the Pentagon’s 1.4 million active-duty service members.

Trump has previously said he won’t sign a budget bill unless it funds construction of a wall on the U.S.-Mexico border, and members of his administration have suggested raising the money by cutting subsidies to Americans that help them afford health insurance on the Obamacare exchanges — a nonstarter for congressional Democrats.

If the deadlock does lead to a shutdown on Friday, Navy Fed says its members will continue to be able to draw military pay — if they qualify and register for the credit union’s aid program. Registration starts Wednesday, April 26. The program is open to all service members, officer candidates, or DOD civilians “who have their net pay deposited directly into a Navy Federal account.”

Is there any fine print? Well, technically, Navy Fed is offering a payday loan — up to $6,000, depending on your pay grade — but there’s no interest and no credit application. And once the grownups in D.C. figure out how to pay for all their wars and stuff, paying the loan back will be easy. “Once direct deposit of net pay resumes, the amount credited to your account(s) will be automatically deducted as repayment,” Navy Fed says.

Which is great — again, for everyone who qualifies. “If your pay is disrupted, but you don’t meet the eligibility requirements, we recommend you visit a branch or contact us,” Navy Fed said on the registration page.

If you’re not an NFCU member, it couldn’t hurt to contact your bank and see if they have similar options; USAA reached out to its members to make similar financial arrangements after government shutdown threats in 2011, 2013, and 2015.

If you do hear of any similar programs out there from other vet- and service member-friendly banks, let us know in the comments so we can share that info with the community.

USAA is ready to help members in the event of a government shutdown. Specifically, USAA Bank is prepared to offer a no-interest, 0% APR payroll advance loan to military personnel with existing direct deposit at USAA if a shutdown impacts the mid-May military pay. If a disruption in payments seems likely, USAA will email those members and provide information in the “My Offers” section of usaa.com.

We will also offer other solutions, including special payment arrangements, to help USAA members who receive federal payments and find themselves in financial distress because of a funding lapse.

We’re hopeful that a deal will soon be reached, but we stand ready to help our members.

First Command Financial Services is also offering a government shutdown program. Here is a link to our news release.