“Enough to fuel more than a dozen medium-range ballistic missiles depending on the size." 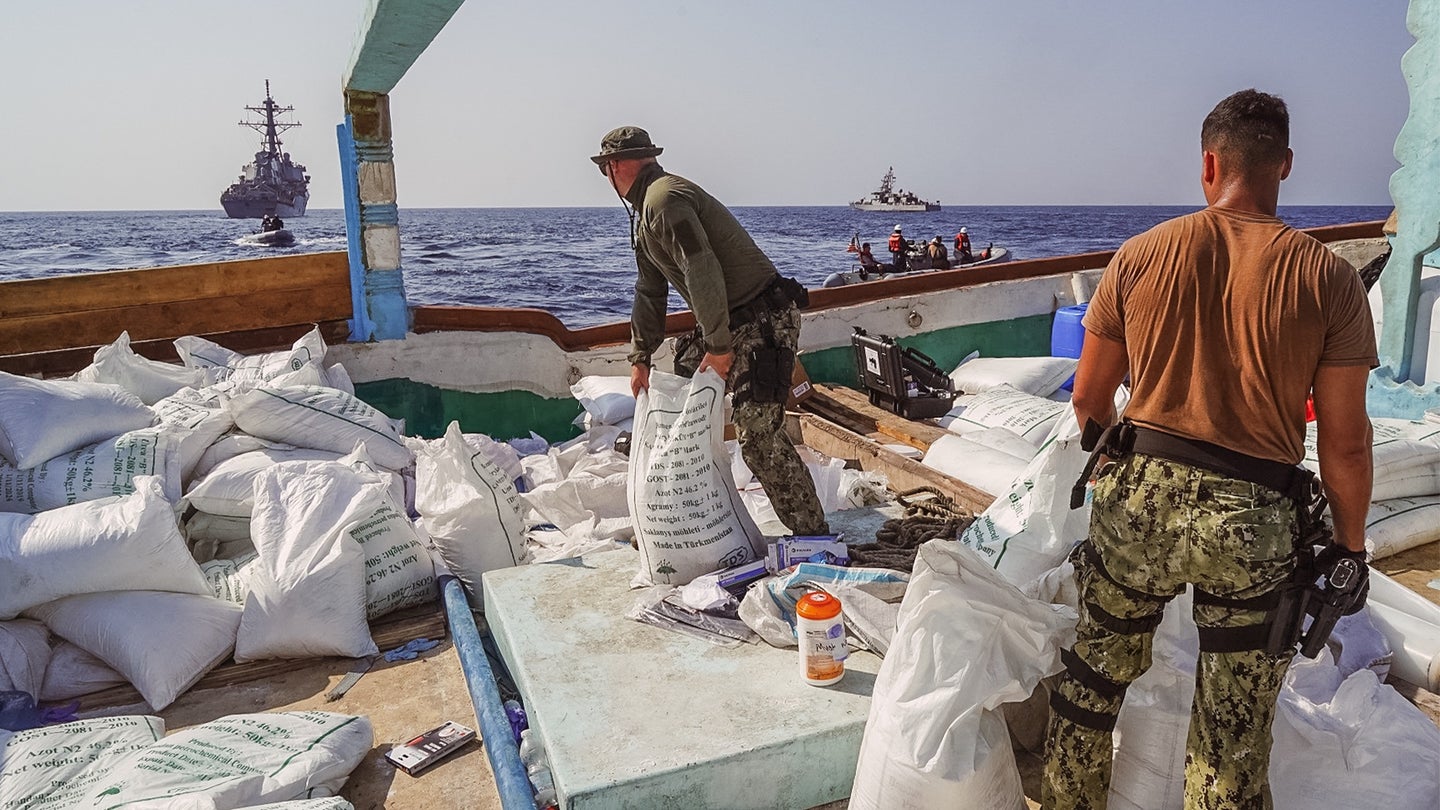 Navy and Coast Guard ships stopped a fishing boat in the Gulf of Oman that was apparently smuggling more than 170 tons of chemicals that can be used to make explosives, the Navy announced on Tuesday.

Guided missile destroyer USS The Sullivans and Coast Guard cutter USCGC John Scheuerman intercepted the fishing boat on Nov. 8 as it sailed from Iran along a route often used to send weapons to Houthi rebels in Yemen, according to a Navy statement.

“This was a massive amount of explosive material, enough to fuel more than a dozen medium-range ballistic missiles depending on the size,” said Vice Adm. Brad Cooper, commander of U.S. Naval Forces Central Command. “The unlawful transfer of lethal aid from Iran does not go unnoticed. It is irresponsible, dangerous and leads to violence and instability across the Middle East.”

The fishing boat was carrying more than 70 tons of ammonium perchlorate, which can be used to make fuel for rockets and missiles or in explosives. Navy forces also discovered more than 100 tons of urea fertilizer, which is also commonly used to make explosives.

The coastal patrol ship USS Hurricane and explosive ordnance technicians from the 5th Fleet also assisted with a weeklong search of the fishing vessel. The four Yemeni crewmembers were turned over to the Yemen Coast Guard on Tuesday.

The Navy noted that this was the first time sailors had seized ammonium perchlorate, but other shipments of material that can be used to produce explosives. In January, the USS Cole and the USS Chinook intercepted a small fishing vessel in the Gulf of Oman that was carrying 40 tons of fertilizer. That same ship was also stopped a year earlier off the coast of Somalia by the guided missile destroyer USS Winston S. Churchill while carrying weapons and weapons components.

For more than eight years, Yemen has been devastated by a civil war between the Houthi rebels and the country’s internationally recognized government, which is backed by the Saudi military. While Iran has officially denied any involvement in the conflict, Tehran has often been linked to shipments of arms and equipment sent to the Houthis in violation of international law and a United Nations Security Council resolution.

Likewise, Iran has made no official comment on this latest seizure, although it comes at a time of rising tensions in the region. A cease-fire in Yemen expired on Oct. 2, and Saudi Arabia has claimed that an attack by Iran could be imminent.

Deeming the fishing boat a navigational hazard, the Navy sunk the heavily ladened ship on Sunday with much of the illegal material still on board.