The real reason Ukraine’s information war is so successful

No amount of disinformation can convince the losing side that they’re winning, or win the battle on the ground for them. 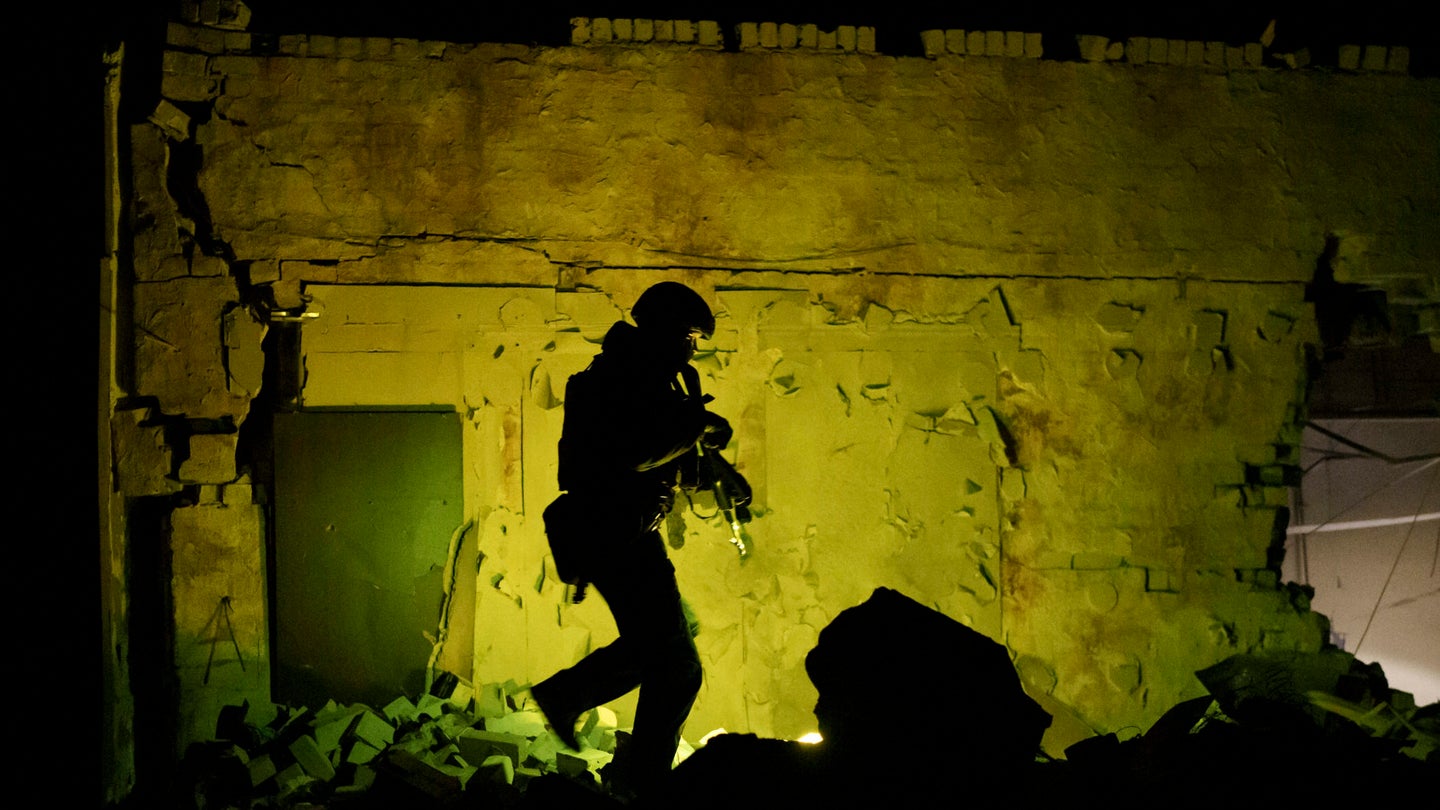 A Ukrainian special police officer walks next to a destroyed building as he patrols during night curfew in Kharkiv, Ukraine, Sunday, March 27, 2022. (AP Photo/Felipe Dana).
SHARE

It’s been just over a month since the beginning of Russia’s invasion of Ukraine, a large-scale modern war that is being live-streamed, minute by minute, battle by battle, death by death, to the world. In this short timespan, the conflict has possibly become the most documented war in human history, and is, perhaps, the greatest example of information warfare techniques used online and through other communicative means the world has ever seen. A month into the invasion, the Ukrainian military has performed better than expected, surviving the initial Russian push. A second, more static phase seems to have begun, as noted by the Institute of the Study of War, “a condition in war in which each side conducts offensive operations that do not fundamentally alter the situation.”

Just as surprising as the current state of the ground war is how Ukraine has adeptly defended against Russian information warfare efforts. The current debate now is whether Ukraine has gone even further and achieved supremacy in the information domain; this is a reality that a month ago seemed unlikely, as Russia’s use of information and hybrid warfare to achieve its strategic objectives was regarded as vastly superior to that of Ukraine’s. The tables have turned.

It’s also clear that Ukraine is engaging in propaganda to highlight its military successes, rather than its failures. Information doesn’t exist in a vacuum, however, and any praise or critique of the Ukrainian information warfare effort should consider that it is their current successes on the ground that are leading to victories in the information domain.

Information is a battleground fought by exploiting ethnic tensions, spreading disinformation, jamming communications, infiltration, and creating narratives through selective photos, video clips and news releases presented in such a way as to garner sympathy and solidarity from the rest of the world, while inspiring fear and sewing chaos in the mind of the enemy. Masters of this form of warfare use stereotypes, deeply held beliefs, and cultural ideas to prey upon their enemy’s weaknesses. This dark art goes well beyond communication on the internet and the stretching of the truth; it contains interconnected techniques in the physical and information domains. Like other forms of warfare, violence is inherent in the concept.

Physical results are the best way to win a war of narratives, and the use of social media by Ukraine demonstrates a deep understanding of how the physical, informational, and cognitive domains are connected.

Russia’s influence campaign, meanwhile, is having trouble due to its current lack of strategic and tactical success in the invasion thus far. These information warfare failures are in direct contrast to the hybrid warfare techniques that the Russian military displayed during their invasion of Ukraine in 2014 and elsewhere. During that conflict, the Russians seized upon historical and ethnic grievances in Eastern Ukraine, and hacked the communications of the Ukrainian defense forces, which disrupted their information infrastructure. They also utilized physical proxies on the ground, such as far-right groups, biker gangs, or the “little green men” of the Russian Armed Forces to fool opponents into thinking that the Russian military was not involved with the war in Ukraine. The U.S. military calls this “deception,” and deception operations can also include subtle disinformation or propaganda campaigns combined with tactical efforts on the ground.

Initially, the expectation was that this war would be a repeat of Russia’s 2014 hybrid warfare successes. But multiple battlefield failures have foiled any attempts by the Russian military to control the narrative.

The gap between success on the ground and creating a cohesive narrative has troubled combatants before, such as the Islamic State, also known as ISIS, ISIL, or Daesh. The Islamic State had a robust and highly successful information warfare effort; while Al Qaeda in Iraq’s military strength peaked at about 1,000 fighters based on many different estimates, the Islamic State — which was Al Qaeda in Iraq’s successor organization — at one point had drawn in over 40,000 fighters from 130 different countries, exponential growth in terms of scale and power. The terrorist group made this possible through social media usage, which was often reported on as being just as or more versatile than that of the American-led coalition. This information infrastructure was dismantled not just by information operations (IO) by the United States (which I was a part of), but also due to our tactical victory over the terrorist army on the battlefield.

Even though Ukraine is at a disadvantage on paper, wars are not won and lost in the abstract. Success or failure hinges on the actions of the soldiers on the ground. In Afghanistan, although we provided billions of dollars in aid and training to the government there, it collapsed within days of the major Taliban push toward Kabul.  At the same time, while outgunned and outmanned in the initial days of the invasion, Ukrainian forces dealt Russia massive defeats or successfully defended their positions – actions that, in turn, fed the memes and chatter on the internet, which further boosted Ukrainian morale and inspired outsiders from around the world to contribute resources and even volunteer to help fight against the Russian invaders.

Memes and other social media messages serve purposes that go beyond just humor; these posts have a strategic and tactical purpose, such as identifying Russian troop locations, documenting atrocities that are occurring, or demonstrating the Ukrainian will to fight. The effect of these messages on enhancing Ukrainian morale cannot be understated. One of the most important elements in warfare is the human element. No amount of firepower, technological superiority, or strategy will make up for a will to fight. Furthermore, technological overmatch does not always ensure victory if one’s enemy continues to display the willpower to resist.

If the Ukrainian Army had broken and run for the proverbial hills, then the narratives about the Ghost of Kyiv (who may or may not be real), the 13 soldiers on Snake Island telling a Russian Warship to buzz off, and the dozens of videos showing Russian vehicles destroyed would be useless, or at least less powerful.

Even though the Ukrainians are most likely engaging in positive publicity, as all governments do, propaganda has its limits. A deepfake video released recently by the Russians that purported to show Ukrainian president Volodymyr Zelenskyy ordering Ukrainian military forces to lay down their arms was quickly debunked, partly due to the fact that recent news and intelligence estimates show Russian casualties are approaching horrifically high numbers and that morale is breaking.

Although there are debates on just how many casualties and equipment losses the Russians have suffered, on the strategic level Ukraine is now more than four weeks into its war and still holds Kyiv, which was expected to fall within hours when the war began. Claims coming from Ukraine’s Ministry of Defense are not examples of another “Baghdad Bob,” Information Minister of Iraq Muhammad Saeed al-Sahhaf, who in 2003 claimed that American forces were being defeated as American tanks were literally shown moving in the distance behind him. The reality of the battlefield situation supports the Ukrainian government’s narrative, whether the exact details are exaggerated or not. The precise details are more of a concern to outsiders than to the participants and do little to weaken the country’s IO campaign.

Militaries across the world are no doubt learning from and analyzing the performance of the Ukrainian military’s information warfare campaign. In 2016, the DoD was happy with a same-day turnaround on media products. Now, the Ukrainian Ministry of Defense is turning around footage to use in strategic narratives within hours, and sometimes within minutes. The United States Marine Corps recently announced this month the creation of new billets focused on influencing the information sphere. They called these new billets influence specialists or influence officers. Interestingly, the new positions combine multiple fields ranging from psychological operations to cyberspace operations. The announcement of these new slots acknowledged the importance of information and physical operations complementing each other.

But no amount of disinformation can convince the losing side that they’re winning, or win the battle on the ground for them.