How Likely Is A New American Civil War? Surprising Lessons From Lebanon’s Conflict

What is the likelihood of civil war in the United States? Few Americans ask me this question, despite the fact... 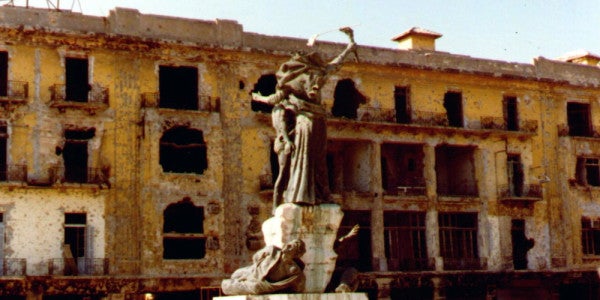 Of course, there are vast, significant differences between the United States and a country like Lebanon. Yet civil war, as a phenomenon, does not respect categorical boundaries between nations—civil wars erupt in small states as in large states, in wealthy states as in poor states, in democracies as in dictatorships.

When Lebanon’s civil war broke out in 1975, Washington Post correspondent Jonathan Randal earned the dubious honor of having predicted the war nearly a year before. In a September 1974 article, Randal measured the domestic political situation in Lebanon against what he called his “shit detector,” a veteran journalist’s rubric for assessing the health of a particular nation, regardless of appearances. His article was counterintuitive, because Lebanon in 1974, despite its precarious geography and various internal tensions, still enjoyed a reputation as the “Switzerland of the Middle East,” a glittering, bustling gateway between East and West, a “banker’s republic” awash in oil money. Movie stars and socialites hobnobbed with sheikhs and intellectuals in Beirut’s sumptuous hotels. The country’s booming economy (and official neutrality in the Israeli-Palestinian dispute) made it a safe bet for investors looking to gain a foothold in the region.

Jetsetters and financiers rejoiced in Lebanon’s freewheeling open market. Randal saw something sinister in it. Seven months before clashes between Palestinian armed groups and right-wing Lebanese militias escalated into full-scale warfare, he observed four phenomena, markers of the deep rot at the heart of the Lebanese system:

One of Randal’s sources added four more data points for the “shit detector:”

Measuring the United States against the shit detector won’t, of course, determine whether or not civil war will break out in this country. Yet, decaying internal systems are an important indicator for civil conflict. Randal’s detector suggests there’s room for both optimism and concern in the United States.

That the United States in 2018 is in a less dire position than Lebanon in 1974 is some small comfort. There are some additional similarities that do not appear on the rubric: like Lebanon in 1975: The United States has a boor for president, powerful and unreliable allies with their own agendas, and an almost cartoonishly ineffective government. Our major conservative party, like the powerful conservative parties in Lebanon are “hanging on to an eroding power base, mindful that their relative edge would be swallowed up… showing increasing signs of schizophrenia.” Our major liberal party is, like the progressive parties of Lebanon, disorganized and de-centered, failing to answer the question at the heart of the crisis: what does meaningful equality look like?

Randal predicted in his article that Lebanon, where politicians had been working for months to defuse countless minor conflicts, would eventually see a final showdown between these competing forces.His prediction came true in early 1975, after a fashion: a major conflagration came indeed, but violence failed to resolve the tension between those seeking reform and those defending the status quo. Fifteen years of warfare decimated Lebanon’s economy, destroyed its environment, and, ultimately, debilitated the country’s future, all without solving the disputes at the heart of its initial battles.

The war created conditions in Lebanon that persist to this day: cynicism about democratic institutions, contempt for the political class, and a deep pessimism about the possibility of achieving justice—or equality.

A long, devastating civil war can create these conditions in a country, but it is not necessary. The threat of violent retribution for speaking the truth can easily lead to cynicism. Persistent, flagrant corruption breeds contempt for our political leaders. Pessimism almost inevitably flows from these and many other violations of democratic norms. Fortunately, peaceful methods for countering these trends exist.

The critical lesson of any civil war is often the most overlooked: violence does not clarify. Instead, violence operates according to its own logic, confusing a conflict’s original parameters as stakes rise higher and brutality escalates. War is a good way to freeze politics, not accelerate it.

What determines a country’s susceptibility to civil war has less to do with its people than with its ruling elite. Are they willing—or able—to reform a broken system rather than instigate violence? Are they willing to face electoral risks for bold policy? Are they willing to live up to their own sweeping rhetoric? If the answer to any of these questions is no, then it falls to citizens to answer a question for themselves: is preserving our fractured present worth sacrificing the future?

Emily Whalen is a doctoral candidate in history at the University of Texas at Austin. She tweets @eiwhalen