How a former US Navy sailor became a Putin propagandist

Patrick Lancaster describes himself as an independent journalist. Critics say he's a foot soldier for Moscow's information war against Ukraine. 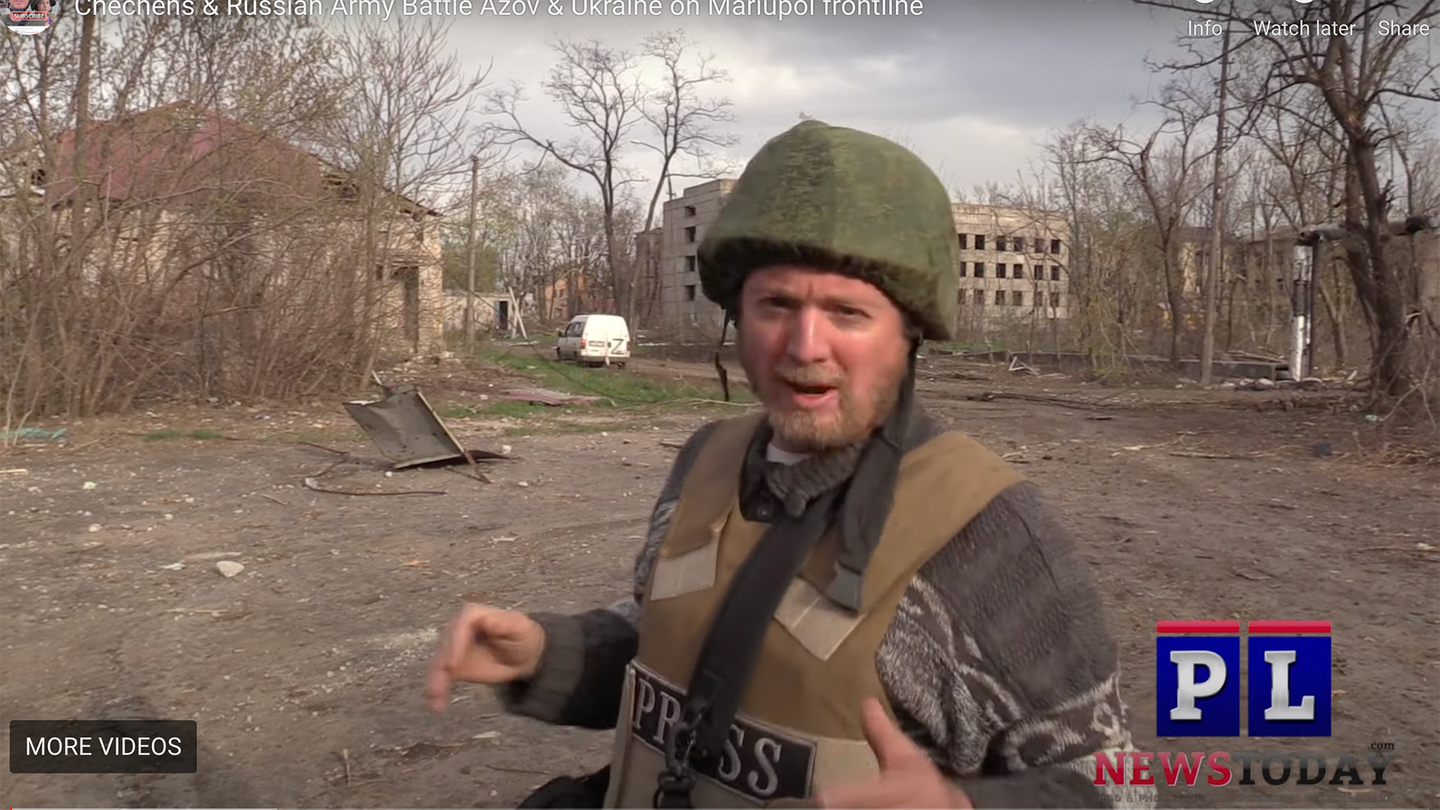 Navy veteran Patrick Lancaster describes himself on Facebook as “an independent crowdfunded journalist,” but critics argue that he is a foot soldier in the Kremlin’s information war against Ukraine.

On Monday, Lancaster posted a video from the city of Mariupol in southeastern Ukraine, which has been besieged by the Russian military for weeks. The Russians have blasted their way through the city the same way they razed other cities, including Grozny in Chechnya and Aleppo in Syria. The city’s mayor has claimed that at least 10,000 civilians have been killed in the fighting and the Russians have reportedly relocated thousands of other Mariupol residents.

Yet Lancaster’s video places the blame for the suffering of Mariupol’s residents squarely on Ukraine’s shoulders. While the video showed several bodies lying in the streets, a man dressed in civilian clothes whom Lancaster interviewed said all the dead were “terrorists” who belonged to Ukraine’s Azov Regiment, which has a history of accepting neo-Nazis as volunteers.

The man then cursed Ukrainian President Volodymyr Zelensky, praised Russian President Vladimir Putin, and said of those killed and displaced by the fighting in Mariupol: “I feel sorry for them, but what can [you] do when they commit such a genocide?”

At the end of his lengthy interview, Lancaster said the man’s opinions were “kind of common” among the Mariupol residents who have spoken with him, adding: “You see that in all of my reports. I’ve interviewed hundreds of people here in Mariupol to bring you the facts about what’s really happening here.”

Notably absent from Lancaster’s reporting is any mention of evidence that the Russians have committed war crimes in Ukraine. Amnesty International has documented incidents of the Russian military firing inaccurate weapons into populated areas of Mariupol and other Ukrainian cities as well as Russian troops executing civilians. After the Russians left Bucha, a suburb of Kyiv, Washington Post reporters saw more than 200 bodies found lying in the street and in graves, some of which had been beheaded. The reporters also saw evidence that the Russians had sexually abused civilians in Bucha.

“Testimonies show that unarmed civilians in Ukraine are being killed in their homes and streets in acts of unspeakable cruelty and shocking brutality,” Agnès Callamard, secretary general of Amnesty International, said in an April 7 statement. “The intentional killing of civilians is a human rights violation and a war crime. These deaths must be thoroughly investigated, and those responsible must be prosecuted, including up the chain of command.”

Not only is Lancaster able to travel through Russian-controlled territory at will, but in one video he wore a white band on his arm and leg, which is a method that Russian troops use to distinguish friends from foes, Grid reported.

Shortly before Russia’s attack on Ukraine, Lancaster reported on an alleged Ukrainian roadside bomb attack inside territory held by Russian-led separatists. The Russians claimed three people were killed in the attack, but Grid as well as the investigative website Bellingcat subsequently noted that the incident appears to have been staged. The charred remains of one person whom the Russians claim was killed by an explosion had deep cuts to the skull, indicating that the body had undergone an autopsy procedure before it was placed at the scene.

During his video about the event, Lancaster said that he was “investigating on what really happened,” but never challenged the official Russian narrative that three civilians had been killed by a Ukrainian roadside bomb.

“It’s not possible to know if in this incident he’s knowingly involved with producing propaganda, but he has a long track record of biased reporting when it comes to pro-Russian separatists and Russia itself,” Eliot Higgins, founder and creative director of Bellingcat, told Task & Purpose.

Lancaster did not respond to numerous requests from Task & Purpose to provide a comment for this story. He served in the Navy from 2001 to 2006, during which he became a cryptologic technician — a job that involves using “high-power jamming signals to deceive electronic sensors and prevent enemy attacks,” according to the Navy.

He was trained at the Navy and Marine Corps Intelligence Training Center in Dam Neck, Virginia, and he served aboard the now decommissioned aircraft carrier USS Kitty Hawk from 2002 until 2006, according to his official service record. His rank when he left the Navy was petty officer third class.

His videos  —  which contain factual errors, misinformation and in the case of the video involving the alleged IED, have been accused of being outright fabrications – have the potential to reach a wide audience. His YouTube channel has 408,000 subscribers and he has also been featured on InfoWars, a website owned by radio host Alex Jones that passes off conspiracy theories as news. During a Feb. 25 interview with Jones, Lancaster said the people in eastern Ukraine controlled by Russian-led separatists were “in tears of happiness” over Russia’s invasion of Ukraine.

“One woman told me that she is so thankful that [Russian President Vladimir] Putin is going to stop the war here and she can finally feel like a real person again,” Lancaster said.

Iraq war veteran Kristofer Goldsmith tracks disinformation and extremism as CEO of the firm Sparverius. He believes it is possible that Lancaster is working for the Russians, but it’s just as likely that he believes the conspiracy theories that he espouses, Goldsmith told Task & Purpose.

Goldsmith noted that Lancaster will often claim “the Western media won’t show you this” in his videos.

“The pretext of everything that he does is that there is a conspiracy of the Western media to hide the truth from you,” said Goldsmith, who is also helming Task Force Butler, a team of veterans volunteering with Human Rights First to counter extremism and radicalization. “That puts him not just in the same camp as Russia Today or Sputnik, but of Alex Jones.”

The Kremlin’s goal is to undermine American’s faith in democracy, Goldsmith said. Toward that end, it is extremely useful to have veterans such as Lancaster serve as an arm of Russian propaganda because American military veterans can have a tremendous amount of influence on social networks.

“A veteran is more likely to inform the beliefs of their immediate family, of their co-workers, their friends, etc.,” Goldsmith said. “So, for every dollar — or every ruble — that is spent targeting an American service member, they’re getting a better bang for the buck than targeting any other demographic within the United States.”