Seriously, stop trying to make everything about 'lethality' 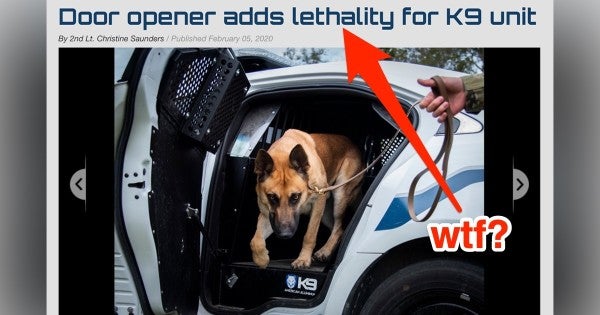 Ever since the Pentagon changed its mission statement from “provid the military forces needed to deter war” to “provid a lethal Joint Force to defend the security of our country,” the entire U.S. military seems to have fallen in love with “lethality” — and not in a good way.

Lethality, on its face, is a fine benchmark to gauge the effectiveness of the U.S. military, one championed in the Pentagon lexicon by former Defense Secretary James Mattis during his tenure at the helm of America's fighting force. As Task & Purpose's Jeff Schogol previously wrote, the term “can be a useful rallying cry to focus the Defense Department's priorities” in an increasingly complicated world.

Every generation gets the euphemism for military force it deserves, and “lethality” is a fine one for the era of Great Power competition. But in recent years, the term has also become prone to abuse and misuse, applied to situations that have no direct relationship to combat whatsoever. To wit: this recent missive from the Air Force on how an automatic door-popping feature that allows base security forces to summon their dog as backup in a testy situation “adds lethality for K9 unit.”

From the Air Force story:

Who do you call for backup when you're patrolling alone? Man's best friend.

The 96th Security Forces Squadron modified a military working dog squad car last summer with a safety feature that protects both the dog handler and their canine companion while out on patrol.

The patrol vehicle now contains a door-popping feature that releases the canine from the vehicle by a remote control. The security forces member wears the remote on their vest.

Danger is ubiquitous in the security forces line of work, with situations susceptible to escalate or de-escalate at any moment. The dog handler may engage an individual, and if that person becomes combative toward the SFS member, a way to open the rear door of the patrol vehicle for the canine's help comes in handy.

“If we are by ourselves, our dog acts as our backup,” said Tech Sgt. Michael Castilleja, 96th SFS MWD trainer.”

Dog handlers use the canines as another line of defense only when necessary, and the automatic door gives the dog handler the option at their discretion.

“All the handler will need to do is press the button to pop open the door and the dog is released,” said Tech Sgt. David Garver, 96th SFS kennel master.

On one level, sure, OK, a remote system for unleashing the hounds is certainly a useful tool for Air Force security forces who may find themselves in need of a razor-toothed assist when dealing with an intruder. But does it really enhance “lethality” in any real substantive way? Maybe a little bit, but is this really a major asset when it comes to Great Power competition? I think not.

The Air Force is a master when it comes to the abuse of “lethality” in every goddamned public affairs release. Just consider this breathless release on “perfecting the human weapon system with healthy fueling,” which posits that a balanced breakfast is key to ensuring that airmen are ready to kill at a moment's notice.

An excerpt, if you will:

In today's military environment, the Air Force isn't just focused on aircraft being in top shape and powered by the right fuel to defend our nation.

The Air Force Services Activity, through its comprehensive healthy food initiative, or HFI, continues zeroing in on the human weapons system – our nation's Airmen – and providing them “with the right nutrition to increase lethality; ensuring a more ready force to meet mission requirements,” said Bill Spencer, AFSVA's Food and Beverage Division chief.

“Our customers continue to seek performance 'fueling' menu items,” Spencer said. “And through our HFI approach, we're delivering that.”

To be clear, the Air Force isn't the worst offender. Just consider that the DoD kicked off an entire “showcasing lethality” series in June 2018 with an in-depth look at how Hawaii Army National Guard personnel got lethal as hell while responding to the eruption of Hawaii's Kilauea volcano that May, operations that have a tenuous relationship to the business of dealing out violence.

Look, plenty of changes to DoD policy actually play a significant role in augmenting the lethality of U.S. forces. Better ammo designed to defeat enemy body armor downrange is one clear example; so does training U.S. service members to better zero their weapons.

But it's time for the Pentagon to stop framing every single change it makes, no matter how minute, as a revolutionary addition to its mission of lethality. That is unless the lethality mission also includes the killing of the true meaning of words.