When people struggle to make sense of why the United States still isn’t winning the war in Afghanistan after 16... 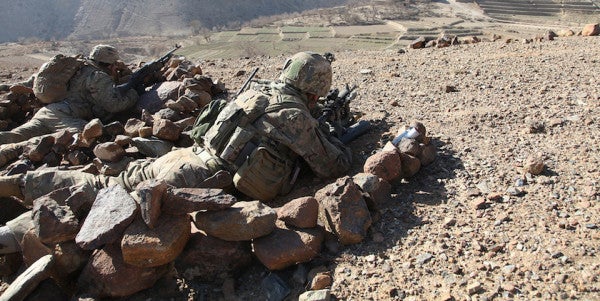 When people struggle to make sense of why the United States still isn’t winning the war in Afghanistan after 16 years, they often blame the rules of engagement, which dictate when, and at what, soldiers can shoot. American troops are some of the most highly trained and best equipped warriors on the planet. They have enormous firepower at their disposal. They have helicopters, gunships, drones, night-vision, and MOABs. Their adversaries wear sandals into battle. Yet somehow, the U.S. military seems even further from victory over the Taliban now than it was when NATO first drove the group from Kabul in 2001.

So it must be the rules of engagement: They’re too restrictive, too out of touch with the reality on the ground, the equivalent of making a world champion boxer fight with one arm behind his back. Without rules of engagement, soldiers have the freedom to shoot first and ask questions later, to perforate anything on the battlefield that even vaguely resembles a threat, to ruthlessly pursue the enemy. Had it been given sufficient resources and left to its own discretion, the military would’ve cleared every acre of Afghanistan long ago, or so the thinking goes.

President Barack Obama appeared on board with this idea when, in December 2009, he announced a surge of 30,000 troops to Afghanistan, bringing the total to record high of 100,000 for an 18-month window to beat back the Taliban before a withdrawal commenced. But the deployment of overwhelming force came with a catch, courtesy of Gen. Stanley McChrystal. McChrystal subscribed to the once immensely popular idea that counterinsurgencies aren’t won by stacking bodies, but rather by winning over the “hearts and minds” of the civilian population — which means doing everything possible to avoid killing innocent people, among whom insurgents tend to eat, sleep, hide, and launch attacks. Troops were no longer allowed to employ firepower — airstrikes, guided-rocket attacks, artillery barrages, mortar fire, and even their personal rifles — if doing so would endanger the life of a non-combatant. Anyone who wasn’t carrying a weapon or planting a bomb was considered a non-combatant.

Once the Taliban got savvy to the new rules of engagement, they started to exploit them: ambushing NATO forces, dropping their guns, and fleeing to the nearest crowded market or village. Then, when nobody was looking, they’d go back and do it again. It was a frustrating time to be an American soldier in Afghanistan and a dangerous time for, well, everyone: The number of U.S. battlefield deaths spiked sharply from the previous year. Meanwhile, the United Nations counted a total of 2,777 conflict-related civilian deaths in Afghanistan in 2010, a 15% increase from 2010, despite the fact that civilian deaths caused by coalition airstrikes dropped by more than half.

But with the end of the Obama presidency came an end to the “hearts and minds” era — and a return to something more along the lines of shock and awe. President Donald Trump, who before assuming office repeatedly characterized U.S. military involvement in Iraq and Afghanistan as an unnecessary waste of lives and resources, has opted for the opposite approach embraced by his predecessor and given the Pentagon “total authorization” to execute raids and strikes against enemy targets throughout South Asia, the Middle East, and the Horn of Africa without seeking White House approval first. And when Trump announced his new Afghan War strategy in August, he vowed to “lift restrictions and expand authorities” for troops as their numbers in Afghanistan increase by approximately 3,000 in the coming months at a cost of $1.1 billion.

“We are not nation building again. We are killing terrorists,” he said before a largely military audience at Joint Base Myer-Henderson Hall in Virginia. “We will also expand authorities for American armed forces to target terrorist and criminal networks that sow violence and chaos throughout Afghanistan.”

How exactly the additional 3,000 troops or Trump’s new strategy will turn the war around (“In the end, we will win,” the president declared in August) is unclear. There are currently 11,000 American service members deployed to the country, large swaths of which have been seized by a resurgent Taliban since the NATO combat mission formally ended there in 2014. The bulk of those service members are currently tasked with training and advising local forces, while a small contingent of special operations troops are conducting counterterrorism operations against a branch of ISIS that has established a foothold in the country’s east.

Secretary of Defense James Mattis seemed to suggest that loosening the rules of engagement, those maddening restrictions on lethality downrange, is a key ingredient in the secret sauce. However, we’ve carried out this experiment before — during the initial phases of the wars in Iraq and Afghanistan. The rules of engagement were tightened after it became painfully clear that the more civilians we killed on the battlefield, the more the insurgent ranks would grow — which, of course, is detrimental to the long-term goal of ensuring that Iraq and Afghanistan don’t become festering hotbeds for anti-American extremist groups. That’s why we got into this war in the first place.

Mattis told the House Armed Services Committee on Oct. 3 that Trump had granted him the authority to make adjustments to the rules of engagement that could expedite the fight against the Taliban, an expansion of his already-broad authority over the war effort. As Defense News notes, Mattis has already made two major changes: removing “proximity requirements” for strikes on Taliban insurgents, and embedding U.S. troops with Afghan units below the division level. The latter tweak will put more Americans near the front lines, while the former will likely result in a significant increase in the number of bombs dropped on Afghanistan. That number has already started to spike. U.S military aircraft unleashed more ordnance in the country in August 2017 than it had during any month since August 2012.

“Restrictions that did not allow us to employ the airpower fully have been removed,” Mattis said. “We are no longer bound by the need for proximity to our forces. It used to be we have to basically be in contact with that enemy”

“If they are in an assembly area, a training camp, we know they are an enemy and they are going to threaten the Afghan government or our people, [Gen. John Nicholson, commander of U.S. Forces Afghanistan] has the wherewithal to make that decision,” he added.

Mattis and Dunford, who testified alongside the secretary of defense on Oct. 2, justified the decision to move American troops down from the division level — where they had been working alongside Afghans since the end of the NATO combat mission — to the brigade and battalion levels because that, as Dunford put it, is where the “decisive action” is occurring. “[Air power] wasn’t being delivered to those Afghan units most relevant in the fight because we didn’t have the authority to put advisers down in that level of the fight,” Dunford said. “That has, and it will, make us more effective.”

Does all of this mean that the U.S. military strategy in Afghanistan is shifting away from a counterinsurgency doctrine rooted in the core assumption that, as C.J. Chivers of The New York Times once put it, “using lethal force against an insurgency intermingled with a civilian population is often counterproductive”? Because there is indeed an argument to be made for the other approach — the one guided by the belief that the quickest way to ensure lasting safety for the Afghan people is to rid the country of the Taliban. In 2016, as insurgents rampaged through the countryside, seizing key districts and inflicting heavy casualties on Afghan national forces, the civilian death toll in Afghanistan reached a record high, and the rate persisted at the same level through the first six months of this year. According to the United NationsAssistance Mission in Afghanistan, a total of 1,662 civilian deaths were confirmed between Jan. 1 and June 30. 1,141 of those deaths were attributed to anti-government forces.

Still, Mattis testified that the United States will do everything “humanly possible” to avoid civilian deaths, but that was a pillar of the “hearts and minds” strategy employed by McChrystal: Doing everything humanly possible to avoid killing innocent people entails restricting the use of force so much that the risk of death is transferred from the civilian population to the troops, who hold their fire at their own peril.

That doesn’t appear to be the intention here. But in an emailed statement to Task & Purpose, Pentagon spokesman Lt. Col. Mike Andrews seemed to imply that, well, maybe it is.

“Secretary Mattis has been very consistent that we are in Afghanistan to terrorism to make the U.S. safer and to protect the Afghan people,” Andrews said. “That means that we won’t decide that the safety of noncombatants is something we’ll trade or barter to gain a military advantage.”

“Self-defense will always be available to U.S. personnel, but how that is defined at the tactical level is something we generally don’t talk about since it could inform the enemy on our training, tactics, and techniques,” he added.

There is, however, one key difference. During Obama’s surge, the U.S. military relied almost exclusively on its own troops to identify targets for airstrikes. Combat platoons were always accompanied by forward observers or combat controllers, who coordinated strikes from the vantage point of the front line. Moving American personnel down to the brigade and battalion levels of Afghan military units will not achieve that same level of precision. As the number of U.S. airstrikes increase, American forces will still have to rely heavily on their local counterparts to mark targets, as they’ve been doing in the anti-ISIS campaign in Iraq and Syria, where hundreds of civilians have died as a result of U.S. airstrikes coordinated by local forces.

When asked about the civilian death toll in May, Mattis called it “a fact of life in this sort of situation.” Adding, “We do everything humanly possible consistent with military necessity, taking many chances to avoid civilian casualties at all costs.”