When did Marines really start eating crayons: An investigation

From Pine Green to Periwinkle. 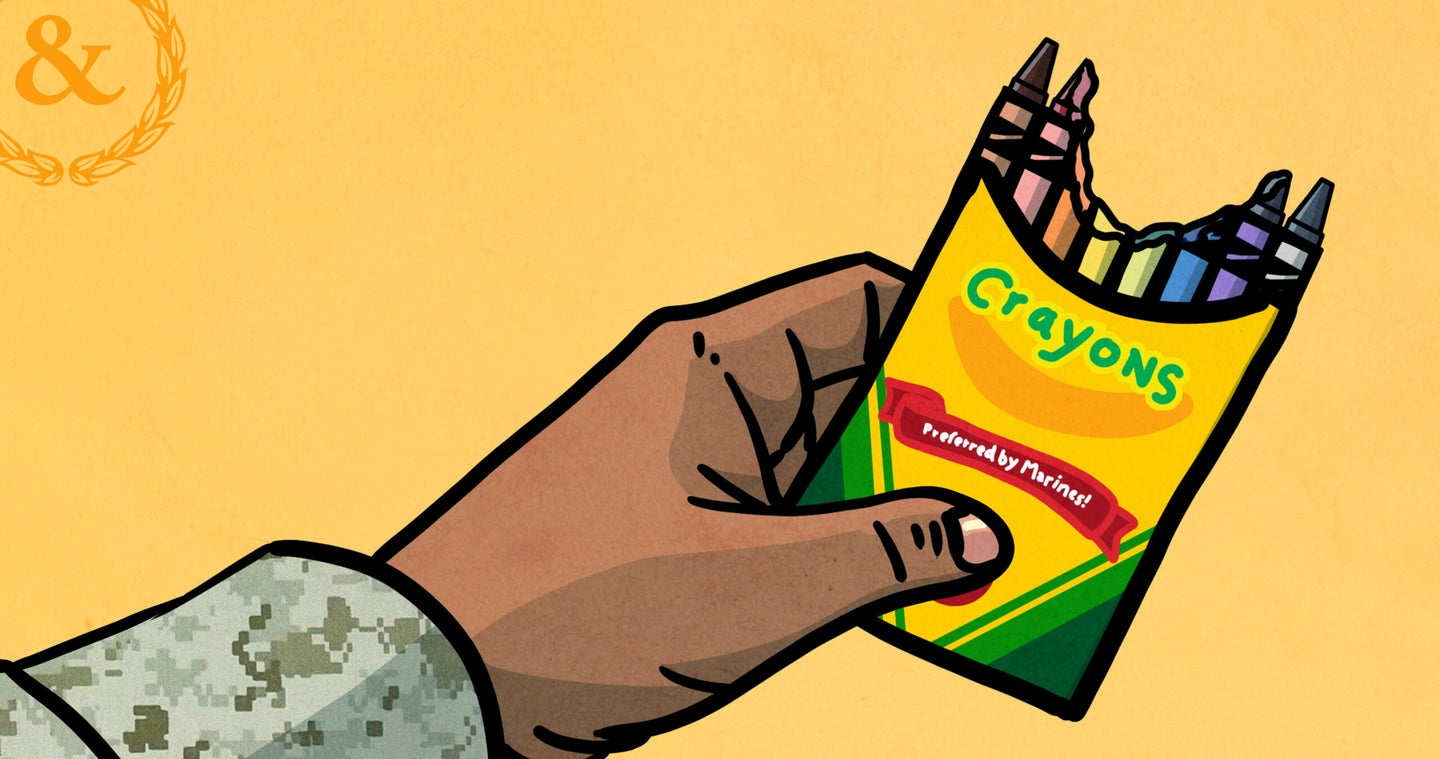 Just where and how did that joke about Marines eating crayons really start? (Aaron Provost/Task & Purpose).
SHARE

Marines, as the joke goes, eat crayons. If you’ve spent any time in or around the U.S. military in the last decade, you’ve probably heard some variation of it. Whether it’s that a Marine doesn’t know what else to do with crayons, or perhaps just likes the taste, give a Marine a box of Crayolas — from Pine Green to Periwinkle to Radical Red — and they’ll end up in their stomach before too long.

This meme is now ubiquitous in some quarters. Social media is filled with mostly self-deprecating references to Marines being “crayon eaters.” Not just one, but multiple Marine veterans have started lines of edible crayons. The Marine Corps even produced a video in 2018 making light of the joke for National Crayon Day. Whether you like it, resent it, or embrace it, the joke has become a fixture of modern-day U.S. military culture.

But like many widely-shared military memes, this particular joke seems to have emerged out of the ether. Just as Killroy was one day, simply, here — and then everywhere — in World War II, it seems like Marines were just one day known as crayon eaters.

The internet is a vast place that rarely forgets anything, though, so Task & Purpose decided to take a journey deep into its depths to try and track down when, exactly, Marines started eating crayons.

The results of our search reveal that the joke is likely a relatively recent invention of the modern Marine Corps.

“When I got out in 2010, it was definitely not a thing,” said Maximilian Uriarte, an author, artist and filmmaker who writes the popular Terminal Lance comic strip. “Obviously there is a general joke that Marines are dumb, but there was no mention of crayons when I was active duty.”

Likewise, one of those edible crayon creators, Frank Manteau, told Task & Purpose that when he was in the Marine Corps in the 1990s, the joke about eating crayons didn’t exist yet. Going back deep into the Google archives and using search prompts like “Marines crayons” or “USMC crayons” or “Do Marines eat crayons,” nothing seemed to appear prior to 2010. That was the year that an ancient — by internet standards — Pinterest offering for a Marine crayon birthday cake appeared. This was kind of like saying that Marines eat crayons, but it was unclear if it was truly a version of the “Marines eating crayons” joke.

Soon after that Pinterest post first appeared, the references to eating crayons started popping up on social media, from Facebook, to Twitter and Reddit. Like this Facebook post from 2012 that suggested a cadence of “I want to be a crayon eater.” By 2014, people were commenting on Facebook photos, wishing a “happy birthday to all you degenerate, crayon eating drunkards” or commemorating “my crayon eater when he was deployed to Afghanistan.” Moving into 2015, the joke started to appear more and more: on Nov. 10, the Marine Corps’ 240th birthday, a brewery posted on Facebook that Ben & Jerry’s was offering crayon flavored ice cream. The idea of Marines eating crayons was beginning to take shape.

From 2011 to the present day, Google Trends, which tracks search terms, showed periodic spikes in popularity for phrases like “Marines eat crayons” or “Marines crayon eaters.” From 2011 to 2016, interest seemed to increase once or twice a year. Beginning in 2016, though, searches for Marines eating crayons started to consistently increase, reaching a high point in November 2019. This is consistent with when the joke really started to become popular on social media: 2016 was when one of the first memes began appearing on Facebook, like this one, which was posted in August of that year.

It seems clear that something happened around 2016 to kickstart the crayon eating joke, but exactly where and when?

“I remember very clearly when it came out, around 2015 or 2016, on the Untied Status Marin Crops Facebook page,” said Uriarte. “There was this joke that some Army guys give an MRE to a Marine and it’s just crayons, and then the Marine starts eating them.”

The current Untied Status Marin Crops Facebook page doesn’t go back any further than 2017, but there are plenty of references to Marines eating crayons throughout. The original cartoon, the moment when “Marines eating crayons” went from an occasionally shared joke to a viral meme, may no longer exist. But it was posted elsewhere many times.

“It just went viral and became a thing,” said Uriarte. “There’s people that claim that it started earlier, but to my knowledge, that’s the one that made it a Corps-wide meme.”

Today, the crayon-eating joke remains as popular as ever, although as Uriarte said, “It’s a little played out.”

“At first it was legitimately funny, but I think the military community has a tendency to run a joke into the ground,” he said.

Humor is, of course, subjective, but a joke that spreads this quickly must have some universal truth to it. Take that one scene from Saving Private Ryan, where two of the characters reference FUBAR, to a third, less experienced soldier. FUBAR — Fucked Up Beyond All Recognition — was a real joke from World War II, invented by real soldiers and referencing both the military’s love of acronyms and the tendency for things to be, well, fucked up. It may seem a little dated now, but the core of the joke still works, because it’s describing something universal to everyone in any military, whether it’s 2023, 1944, or 75 CE.

Finding the absolute, very first reference to Marines eating crayons may be impossible. Social media accounts have been deleted, and there will always be claims that someone, somewhere, said it first. But when it comes to taking credit for a joke, it’s often who made it popular, and in that case “Marines eating crayons” can be pinned on a single Facebook post from seven years ago. So, keep the memes coming — you may just become the stuff of Marine Corps legend one day.