The ships were scuttled to avoid a fight with the Soviets during World War II, but now they’re peaking above the Danube River. 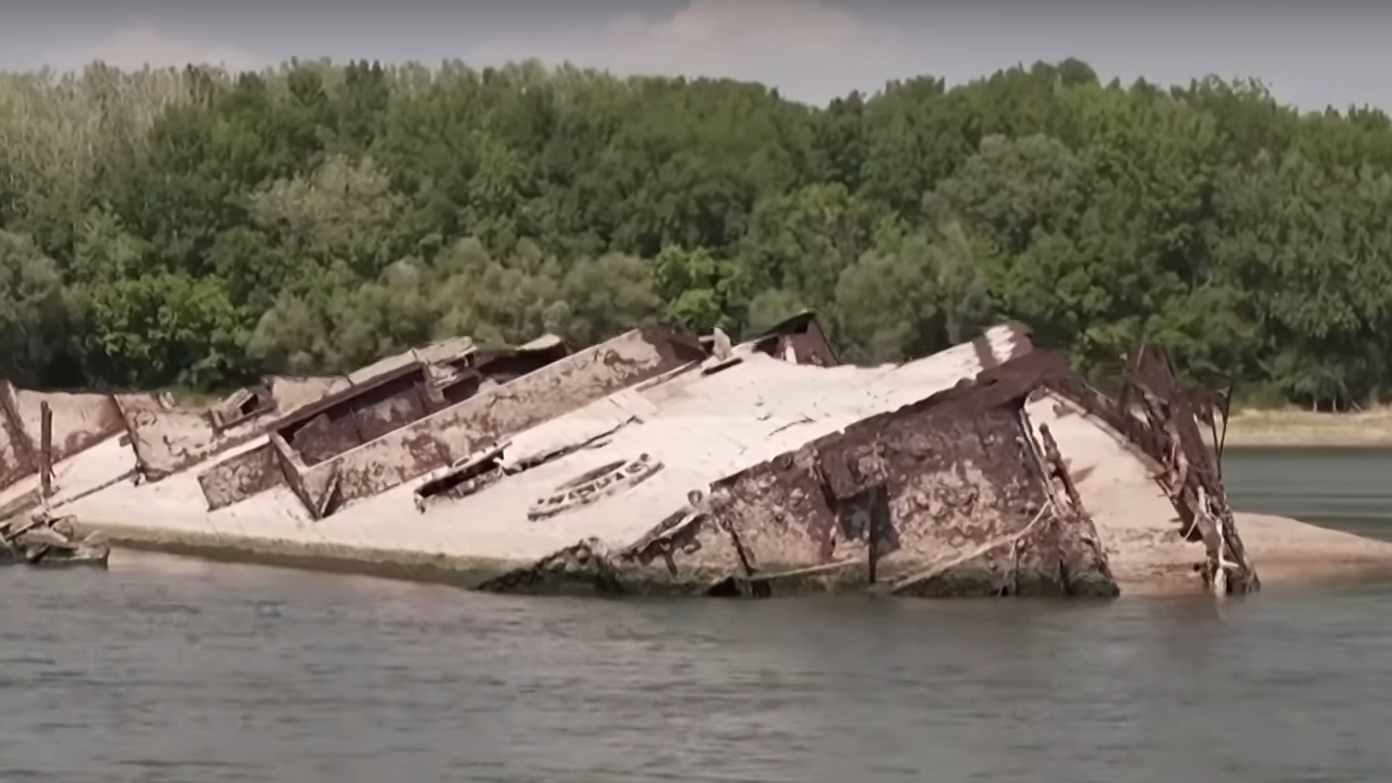 One of the sunken Nazi ships in the Danube River. (Screenshot via Global News).
SHARE

This summer has been a brutal one in the Northern Hemisphere, with heat waves sending temperatures skyrocketing and exacerbating ongoing droughts. The result has been some unusual finds in shrinking rivers and lake beds. In Spain, a kind of Stonehenge-like structure has emerged after thousands of years. Nevada’s Lake Mead continues to recede, uncovering multiple human remains, possibly from the mob’s heyday in Las Vegas. And in Serbia, an entire World War II-era flotilla has made its presence known after decades.

This past week, the Danube River has receded so much that more than 20 ships have emerged from the surface. Their metal hulls are intact, with command bridges and turrets rising above the current. All are Nazi warships from the Second World War.

Here’s the backstory: In 1944 the Soviets’ counterattack on the Eastern Front was in full swing. The Nazis were getting hammered, forced back toward Berlin and their eventual defeat. On the run and being harried by the Soviets, the Germans’ Black Sea fleet was in the Danube, trying to escape up the river to safer waters. The fleet was large, with several hundred ships still sailing. But instead of pushing on or fighting the Soviets to escape, the Nazis decided to scuttle the ships. They sank to the riverbed, roughly 20 miles from the Serbian river port city of Prahovo.

The ships’ location isn’t a revelation — they’ve been known to be there for years. According to Al Jazeera English, when water levels are low on the Danube they can even be an obstacle for certain ships, but this is the first time the flotilla has made it above the water since 1944. The ongoing drought has exacerbated wildfires and hurt both irrigation and farming, all matters hurting even more as Russia’s war in Ukraine impacts global food supplies.

As old and waterlogged as they might be, the sunken Nazi ships still pose a kind of threat. The ships were scuttled, not blown up, and the mostly intact hulls are filled with munitions the Nazis didn’t try to salvage. The Serbian government tried in March to find crews who could dive to the wrecks and clear their armaments. Presumably, that will be easier with the ships now partly above water.

Old bombs are a real danger; in July, wildfires in Slovenia set off 100-year-old explosives that were still in the area from World War I. Earlier this summer a World War II-era bomb was also uncovered by shrinking levels on the Danube in Italy; that was detonated on Aug. 7.

But now there’s a new issue, beyond climate change shrinking Europe’s rivers, there’s now a new problem posed by this: What to do with more than 20 Nazi ships suddenly above the water? They’re waterlogged Nazi ships. It would be poor taste to claim them, and it’s not as if the Danube is deep enough to really move them.

Perhaps the various armies of Europe could use them for target practice? What better way to do a live-fire drill than blowing up a Nazi warship?