"There appears to be an increase in high-risk behaviors among service members; that is, having sex without a condom or having more than one sexual partner." 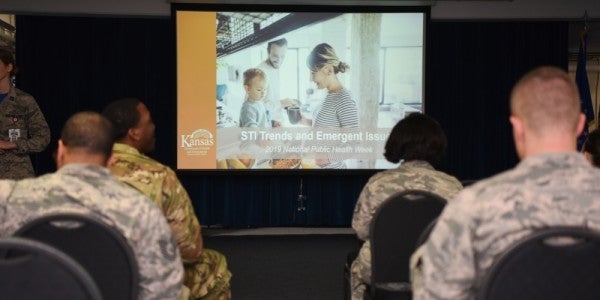 The U.S. military is seeing an increase in sexually transmitted infections such as chlamydia, gonorrhea, and syphilis in part due to dating apps, according to the Military Health System.

“There appears to be an increase in high-risk behaviors among service members; that is, having sex without a condom or having more than one sexual partner,” Air Force physician Maj. Dianne Frankel said in a news release.

Those data points had doubled since the 2011 survey.

One reason for the high rates of sexually transmitted infections is the military has a large population of male service members between the ages of 18 and 25, which is the most common group for such infections, Norma Jean Suarez, a nurse practitioner in preventive medicine at Brook Army Medical Center in San Antonio, said in the news release.

Another factor contributing to the increase in infections is dating apps, which can promote more anonymous hookups, Suarez said in the news release.

“Anonymity can make partners difficult to track down,” the news release says. “Having anonymous sex is one of the CDC's list of behaviors that can increase risk of contracting an STI or HIV [Human Immunodeficiency Virus].”

However, Suarez noted that the rates of service members who have contracted HIV have been “relatively stable” between 2012 and 2017.

The most reliable way to avoid getting sexually transmitted bacterial infections is to avoid having sex unless you are in a long-term monogamous relationship with a partner who is “known to be uninfected,” said Col. Amy Costello, chief of preventive medicine at the Air Force Medical Support Agency.

“That's not a realistic plan for many of our younger service members who aren't yet married or in long-term monogamous relationships,” Costello said in the news release.

That is why it is vital for service members to use condoms and get tested as soon as they show symptoms of sexually transmitted infections, she said.

SEE ALSO: Sexually Transmitted Diseases Are On The Rise Across The Military