“From my read … it is both more accurate and has the potential to be more lenient, enabling a wider variety of body types to pass.” 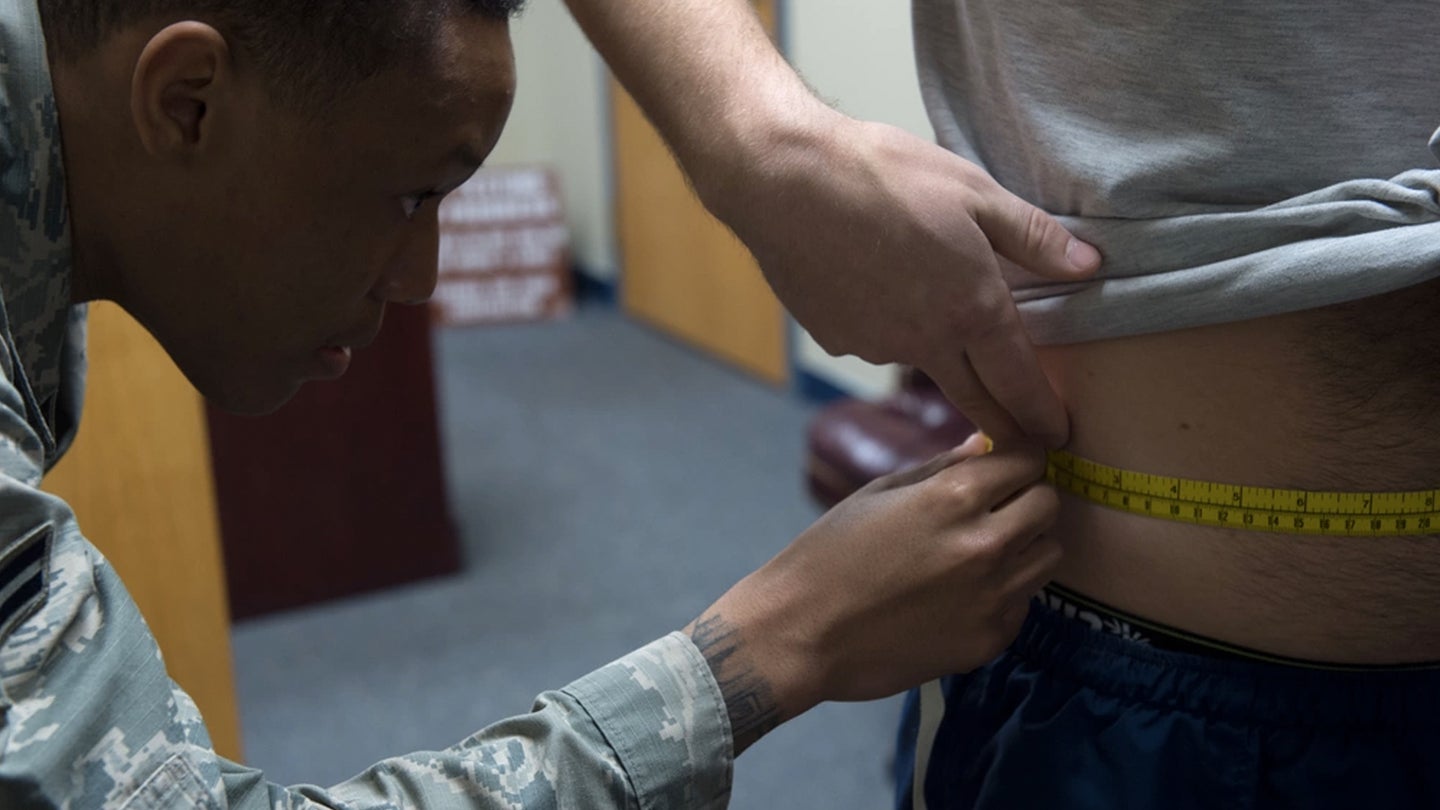 Airmen and guardians will soon participate in an annual waist-to-height ratio test meant to assess whether their level of abdominal fat puts them at risk for certain health conditions, the Air Force announced in a statement on Monday.

The waist-to-height ratio is the heart of the new Body Composition Program, the replacement for the abdominal circumference measurement, also known as the tape test, which was removed from the Air Force’s physical fitness test in 2020. The tape test has been criticized as being inaccurate for measuring fitness and unhealthy since some airmen starved themselves before a fitness test in order to pass.

Defense Department regulations require some kind of body composition test as a measure of service members’ overall health and readiness. The new program, which launches in April, is still separate from airmen and guardians’ physical fitness test, but it is meant to measure excess fat in the abdominal region, which is “associated with increased health risk,” the Air Force wrote.

“Excess fat in the abdominal region impairs the body’s responsiveness to insulin,” the service explained. “As a result, it contributes to increased health risks such as cardiovascular diseases, stroke, diabetes, hypertension and musculoskeletal injuries, negatively impacting physical readiness.”

The waist-to-height ratio is calculated by dividing waist circumference by height. The “waist” is defined as “the midpoint between the lowest rib and the top of the hip bone, which is normally the narrowest portion of the abdomen,” the statement said. The tests will be held every year around their birth month for airmen and every year around their birth quarter for guardians.

Airmen and guardians who do not meet the standard will not be immediately kicked out of the military. Instead, they will be enrolled into an “informal, self-directed” 12-month Body Composition Improvement Program and referred to a medical treatment facility for evaluation and assessment for other risk factors, the statement said.

Guardians will also be referred to Guardian Resilience Teams, which are made up of “human performance subject matter experts” who can provide Space Force members with a range of physical and mental health care.

The system is meant to be “collaborative and supportive” in order to help airmen and guardians adopt healthy lifestyles, the statement said.

“Above all, our priority is to shift our guardians’ mindset with regards to their health,” Katharine Kelley, deputy chief of space operations for human capital, said in the statement. “We hope the new body composition program and associated holistic health educational resources will inspire our members to move away from an episodic fitness mentality to putting their health first every day.”

The initial results from the waist-to-height ratio assessment are non-punitive, but failing to test on time, or missing an appointment with a medical treatment facility team it could be cause for “commander-driven administrative actions,” the statement said.

If service members continue to score as “high risk” after the 12-month informal self-directed improvement program, they will be enrolled in a “formal” self-directed improvement program, though it was not clear based on the statement how formal differed from informal. If the airman or guardian continues to score as high risk, it may result in administrative action, including separation, the statement said.

The statement came a few hours after a leaked memo appeared on social media that promised an “adaptation period” for the new test from April 1 to April 2024. An Air Force spokesperson confirmed the memo was authentic, though it was not immediately clear which office of the service created it.

To carry out the new “body composition assessment,” unit commanders must identify at least one male and one female body composition manager within their units, the memo said. Those managers will be responsible for administering the assessments and managing the software for recording the results. The system platform is called “myBodyComp,” which had some internet commenters groaning because the similarly-named Air Force personnel evaluation software, “MyEval,” is so dysfunctional that it had to be shut down in November.

One of the interesting aspects of the memo is that it specifically mentions “non-stretch tape measure in inches” as an example of the equipment that units must purchase in order to execute the new body composition assessment.

While it may sound similar to the “tape test” that the service ditched in 2020, experts say that the new waist-to-height ratio may be more forgiving than its predecessor.

“From my read of the new standard, it is both more accurate and has the potential to be more lenient, enabling a wider variety of body types to pass while maintaining the standard,” Katherine Kuzminski, senior fellow and program director for the Military, Veterans & Society project at the Center for a New American Security, told Task & Purpose.

Kuzminski added that the new test “appears to be more tied to a service member’s medical outcomes rather than their performance.” While there could still be career implications for not meeting the standard after a year, “the new policy could have positive implications for commander’s assessments of unit readiness,” she said.

Kuzminski is not the only one open-minded about the new test. Stew Smith, a former Navy SEAL, and certified strength and conditioning specialist, told Military.com in February that the then-pre-decisional height-to-waist ratio was “a better math equation than what they had previously, and it seems like this one may be more lenient.”

The new test is one of many new efforts that the Air Force and Space Force are pursuing to make physical health assessments more tailored to individual service members. In 2021, the Air Force started rolling out a new fitness test that allows airmen to choose shuttle-run sprints instead of a 1.5-mile run to demonstrate cardiovascular fitness; hand-release push-ups instead or regular push-ups to show upper body strength; and cross-leg reverse crunches or planks rather than sit-ups to show core strength. Airmen can also take an unofficial diagnostic test before completing an official one, and if they do well on the diagnostic test, they can use that as their official score.

“I tell everyone to ‘stick with the devil you know’ and just do the classic components if you haven’t tried the other stuff, but man, some of the new things are straight up saving people,” Tech Sgt. Alexander House, a unit fitness program manager, told Task & Purpose in May.

“The new components can be very helpful, but they’re not free passes,” he added. “Most people that tried one of the new ones because they had heard it was easy, but hadn’t mock tested a full set themselves, ended up doing worse than they had hoped.”

The Space Force may take fitness test reform a step further by ditching them entirely. Instead of an annual test, the branch hopes to teach guardians how to take care of themselves through better diet, sleeping, and fitness education, while also monitoring their progress with wearable technology.

“This program will promote not just physical fitness; it will pair fitness with robust education on diet, sleep hygiene, and other physiological factors to promote social, mental, and spiritual health as well,” then-Space Force spokesperson Lynn Kirby said at the time.

“The goal of the new program is to empower airmen to take charge of their health and fitness through lifestyle enhancement to optimize readiness,” Lt. Gen. Caroline Miller, deputy chief of staff for manpower, personnel and services, said in the statement on Monday.