"You’ve got some young kids that are scared to go … We take care of them." 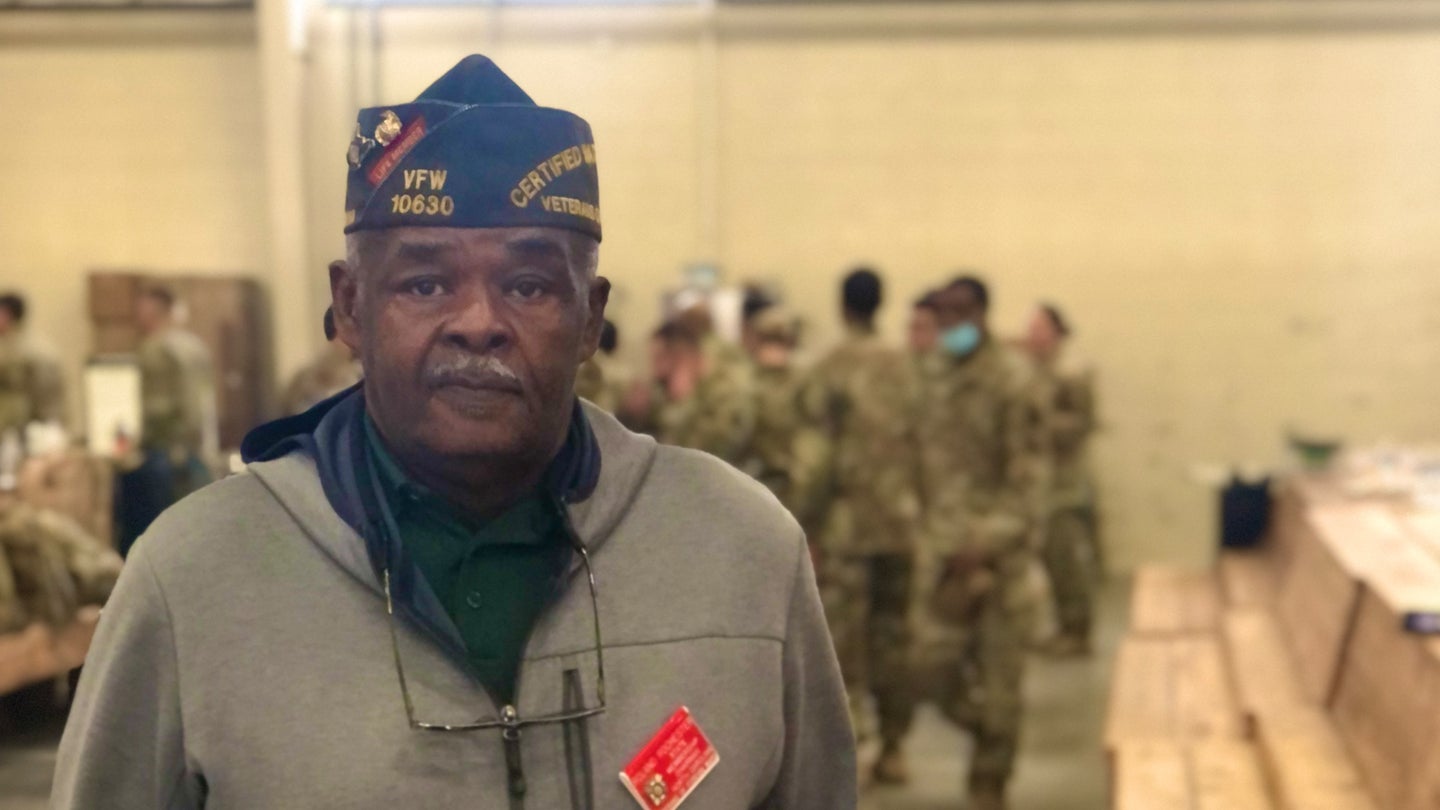 Amid the groups of young men and women in combat uniforms, fixing their gear and grabbing a plate of food while they waited, stood an older man in a gray sweatshirt.

The man walked around the Green Ramp, a terminal area just off the runway at Fort Bragg, North Carolina, where soldiers were waiting to deploy to Europe. He stood near the rows of benches, upon which some soldiers sat, while others attempted to sneak in a few moments of rest between the anxious waiting.

Like them, he was preparing for a long day ahead. “I don’t leave until they all leave,” said Roland Rochester.

A U.S. Marine Corps veteran who served from 1970 to 1984 and fought in Vietnam, Rochester never misses an opportunity to send troops off as they deploy, or welcome them back to Fort Bragg when they return. The senior vice commander of the Veterans of Foreign Wars Post 10630 in North Carolina, and the national VFW representative for Fort Bragg, he’s been doing it since 2002, he said.

On Thursday, as troops prepared to deploy to Europe in response to rising tensions between Russia and Ukraine, Rochester planned to be there well into the night. Usually, he’s just there to talk, he said. They talk about leaving, and how soldiers are feeling in the moment. They talk about coming home. And they talk about mental health.

“When they leave here, you’ve got some young kids that are scared to go … We take care of them,” Rochester said.

People like Rochester, veterans from older generations and past wars, can be found in the terminals and waiting areas at airports on military installations where troops are deploying. In Bangor, Maine, for example, a group of a few dozen volunteers have been welcoming service members home since 2003. The founder of the group, a World War II veteran named Bill Knight, told the New York Times in 2006 that he wanted to ensure troops were thanked for their service after seeing how people were treated after Vietnam.

“We can’t go back,” Knight said. “But we can try to make a difference from here on out.”

A similar sentiment was repeated at Fort Hood, Texas, where one woman, Elizabeth Corrine Laird — known affectionately as the “Hug Lady” — greeted soldiers coming home from and headed out on deployments for 12 years. She continued her work up until 2015 when she passed after a lengthy fight with breast cancer.

In 2019, the Army dedicated a room in a terminal at the Gray Army Airfield after Laird. They estimated that she’d hugged troops 500,000 times.

“To put that into perspective, the active component of your Army is not yet even at 470,000,” said Lt. Gen. Pat White, the commander of III Corps. It’s like “she hugged the entire Army over the 12 years she was doing this.”

Rochester is no different, and as the soldiers lined up preparing to board the C-17 Globemaster III that would take them to Europe, he was the last person by the door as they walked out of the Pax Shed and towards their plane.

One by one, the soldiers walked out with a greeting from Rochester. Telling each one to be safe, he smiled and shook their hand — the last person to see them off, and likely the first person who will greet them again, welcoming them home.