“[T]he X-factor here not isn’t necessarily what equipment you’re holding. ... It comes down to the will to fight.” 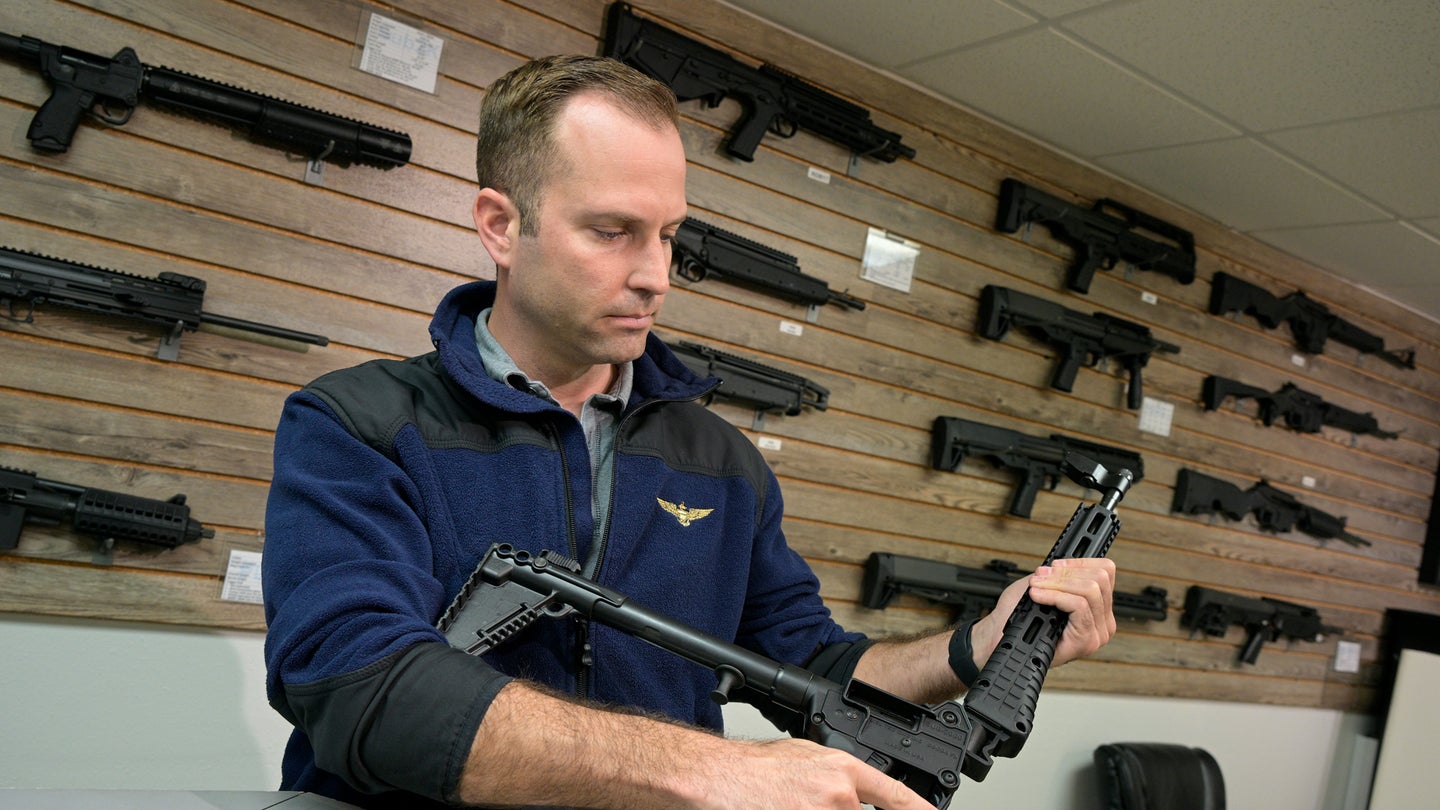 Adrian Kellgren, director of industrial production of KelTec, holds a 9mm SUB2000 rifle, similar to ones being shipped to Ukraine, at their manufacturing facility on Thursday, March 17, 2022, in Cocoa, Fla. (AP Photo/Phelan M. Ebenhack).
SHARE

A gun manufacturer in Florida is donating 400 rifles to Ukraine’s resistance to Russia’s invasion.

Adrian Kellgren, a former U.S. Navy pilot and the director of industrial production of KelTec, which was founded by his father in Cocoa, Florida, has joined thousands of other U.S. veterans and average civilians who are looking for ways to help the Ukrainian people, whether through donations of money or equipment or by actually traveling to Ukraine to fight.

The American people “want to do something,” Kellgren told the Associated Press, who first reported his involvement, because when you “see a group of people out there getting hammered like this, it’s heartbreaking.” In response to a Facebook comment about the reported donation, KelTec’s Facebook page responded that they “weren’t going to go public with that information,” but the “media caught wind of it.”

The $200,000 weapons order was originally made by a longtime customer in Ukraine last year, American Military News reported, but Kellgren “lost contact” with the customer before Russia’s invasion in February. Once the invasion began, Kellgren connected with a diplomat in the Ukrainian Embassy, the AP reported, who helped expedite a federal arms export license “in just four days,” as opposed to the typically-months-long process.

The firearms in question are KelTec’s Sub 2000 9mm pistol-caliber carbine, a four-pound firearm that “folds in half for easy storage and transport,” according to Guns.com.

Daniel Terrill, a gun expert and Task & Purpose editor, described the Sub 2000 as a “great gun for teaching someone how to use a rifle.”

“It folds in half for easy storage — like inside of a briefcase — and it’s really easy to shoot,” Terrill said. “With a stock, it makes it so much easier to be accurate with something like a 9mm cartridge. However, compared to military weapons available today, it’s not as capable. Obviously, NATO cartridges like the 5.56mm or 7.62mm are more powerful and have a longer range than pistol cartridges. Also, you can field strip a Kel-Tec Sub 2000, but if you take it apart more than that, you’ll have a tough time putting it back together. That’s really the only drawback.”

Kellgren is far from the only U.S. veteran seeking to help Ukraine’s resistance to Russia. The AP reported that sheriff’s departments and nonprofits, as well as other weapons manufacturers, have begun gathering equipment and weapons to send to Ukraine. Veterans are even traveling to Ukraine to take part in the fight, with some seeing it as an obvious battle of good versus evil.

“I signed up to go overseas and serve my country, not drill for four years,” a Marine infantryman told Task & Purpose. “I was raised that freedom was everyone’s right and that right should be defended with every fiber of one’s being.”

Other manufacturers offering donations include Adams Arms, who is sending rifles, along with Vista Outdoor and Ammo Inc who “have each promised donations of 1 million rounds” to Ukraine, according to Guns.com.

KelTec’s firearms will be delivered to a “undisclosed NATO-run facility,” according to the AP, where Ukraine’s Ministry of Defense will pick them up and bear responsibility for “smuggling the weapons into the war zone.” But ultimately, Kellgren said the weapons are only part of the fight — the other critical piece of the equation is the motivation, which the Ukrainian people have shown they have in spades.

“The people of Ukraine have had mostly just civilian firearms and they’re holding off a superpower,” he told the AP. “So the X-factor here not isn’t necessarily what equipment you’re holding. … It comes down to the will to fight.”