“We know our government lies to us. We are just meat for them.” 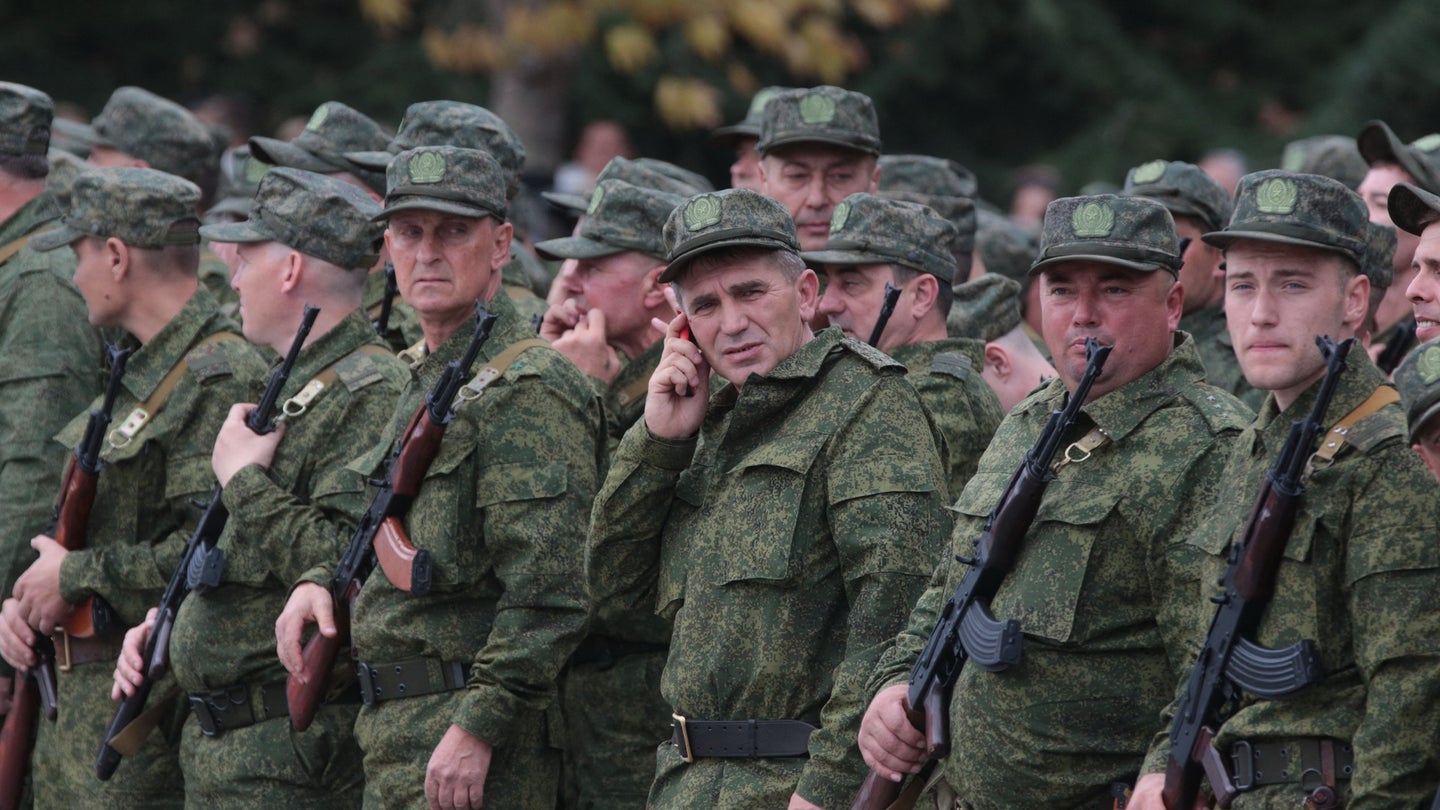 Reservists drafted during the partial mobilisation attend a departure ceremony in Sevastopol, Crimea, on September 27, 2022. (Photo by STRINGER/AFP via Getty Images).
SHARE

As the war in Ukraine enters its eighth month, it’s no wonder that Russian president Vladimir Putin would be searching for a way to declare victory once and for all. But given the way Russia’s military has performed since its invasion in February, it should also come as no surprise that Russian citizens want no part in it.

The invasion of Ukraine has not gone nearly as quickly as Putin believed it would when he launched it in February. The Russian military has been plagued with logistics issues and ran up against fierce opposition from everyday Ukrainians that Putin doesn’t appear to have anticipated. Morale among Russian troops dwindled just weeks into the invasion, as soldiers claimed they were lied to by their commanders about what they would face. And earlier this month, Ukrainian forces pushed into and recaptured northeast territory seized by Russia, forcing Russian forces to retreat.

As of August, U.S. officials estimated that Russia has suffered between 70,000 and 80,000 casualties since its invasion began.

The war has been devastating for Ukrainian civilians, resulting in almost 6,000 killed and over 8,000 injured so far, according to the United Nations Office of the High Commissioner for Human Rights. The UN also recently said that evidence has been gathered proving war crimes have been committed by Russia throughout Ukraine, including a “large number of executions,” accounts of torture, and sexual violence against citizens, including children.

Almost immediately upon Putin’s declaration that roughly 300,000 Russians were being mobilized to join the fight — the first mobilization of its kind since World War II — protests erupted across the country. The new wave of protests follows demonstrations earlier this year after Putin’s invasion, which reportedly resulted in the detention of more than 13,000 people around the country.

The call-up for civilians is not like what we’d see in the U.S., where reservists are regularly staying on top of training. As Task & Purpose has previously reported, Russian reservists are often people who received a year or two of training and haven’t trained since.

Now, the calls are coming from inside the big, Russian house as chaos has swept through cities while people attempt to flee or fight back. The Associated Press reported Monday that a 25-year-old man “shot a Russian military officer at close range at an enlistment office,” after walking into the office saying “no one will go to fight.” One Russian 18-year-old told CNN after flying into Turkey on Friday for a pre-planned vacation that although he hasn’t technically been mobilized yet because he’s a student, “it can change.”

“We know our government lies to us,” he told CNN. “We are just meat for them.”

So far, at least 2,000 people have been arrested, the AP reported. And if they’re not protesting, they’re fleeing.

Thousands of vehicles have piled up on Russia’s borders with Mongolia, Georgia, Finland, and Kazakhstan, as Russian citizens attempt to leave the country, according to the Washington Post. One man who told CNN he is an officer in the Russian reserves, and left for Belarus last week, said he doesn’t “support what’s going on, so I just decided that I had to leave right away.”

“I felt like the doors are closing and if I didn’t leave immediately, I might not be able to leave later,” the man, identified as Ivan, told CNN. Kremlin spokesman Dmitry Peskov said on Monday that “no decisions have been taken” in regards to closing the borders.

Ukrainian President Volodymyr Zelensky addressed the Russian people directly over the weekend, telling them that Russian commanders “do not care about the lives of Russians” and are simply looking to replenish the “empty spaces left by the dead, wounded … or the Russian soldiers that were captured.”

“The key moment has come for you: Right now it is being decided whether your life will end or not,” Zelensky said, according to the New York Times.

And to the U.S. Defense Department, it’s unclear how adding manpower to the fight will really turn the tide in Russia’s favor as they’ve also experienced so many challenges. Sure, it will address manning shortages, but Pentagon spokesman Brig. Gen. Patrick Ryder said last week it’s unclear if it will “significantly address the command and control, the logistics, the sustainment and importantly, the morale issues that we’ve seen Russian forces in Ukraine experience.”

Nevertheless, at least some of the messaging encouraging Russian civilians to resist the mobilization appears to have gotten through. A hotline set up by Ukraine’s Ministry of Defense called the “I Want to Live” hotline, has gotten “a lot of calls” from Russians who were mobilized, according to a Ukrainian newspaper, Ukrainska Pravada. According to Business Insider, which reported on the hotline, a Telegram channel for the hotline has “also received calls from Russia-occupied Crimea.”

The hotline is “intended both for Russians who chose life instead of death for the unknown ideals of the ‘Russian world,’” a post on Telegram said, according to Business Insider, “and for all others who have become victims of Putin’s military machine.”