The Russians have said they are withdrawing from Kherson, the only regional capital in Ukraine they hold. 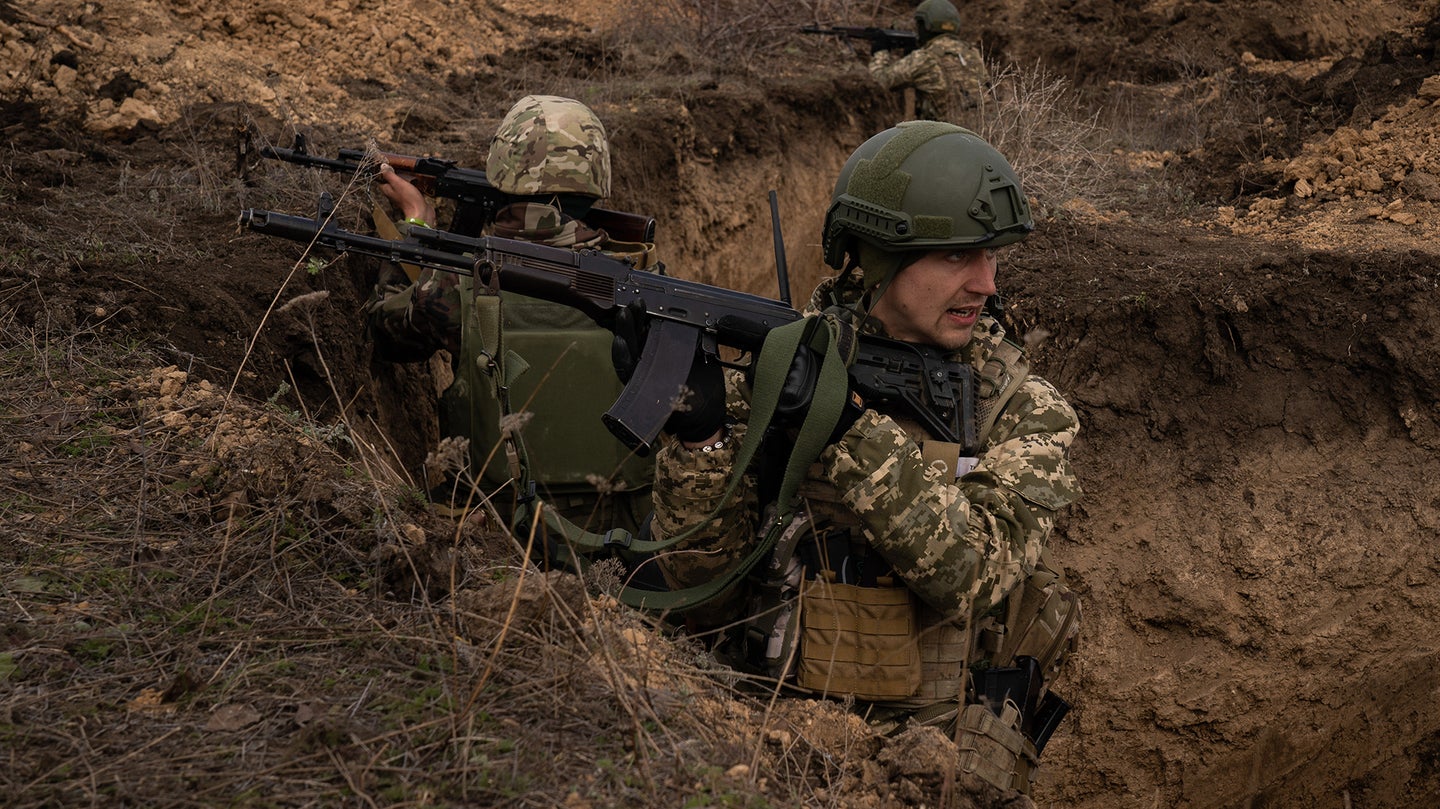 Ukrainian soldiers from the 63 brigade are seen having military training simulating an attack in the trenches for the counteroffensive to recapture Kherson. (Ashley Chan/SOPA Images/LightRocket via Getty Images).
SHARE

While Russia has announced that it plans to withdraw from Kherson, the only regional capital in Ukraine that it still holds, some experts say that the Russians may be setting a trap for Ukrainian forces.

“Ukraine sees no signs that Russia is leaving Kherson without a fight,” Mykhailo Podolyak, an adviser to Ukrainian President Volodymyr Zelensky, tweeted on Wednesday. “A significant part of the [Russian] group is kept in the city, additional reserves are collected in the region. Ukraine is liberating territories based on intelligence data, not staged television statements.”

Podolyak was referring to Russian Gen. Sergei Surovikin’s appearance on Russian state television on Wednesday, in which he recommended withdrawing Russian forces to the east bank of the Dnieper River. Russian Defense Minister Sergei Shoigu immediately approved the move and noted, “For us, the lives of Russian servicemen are always a top priority.”

In a separate tweet, Podolyak warned on Thursday that the Russian military is turning Kherson into a “city of death” by leaving mines in apartments, sewers, and elsewhere. He also said Russian artillery on the other side of the Dnieper River will “turn the city into ruins.”

Glen Howard, an expert on Russia, said he recently spoke with a Ukrainian government official, who said Ukrainian forces are cautiously advancing on Kherson, mindful that the Russians may still fight despite their statements about retreating from the city.

Howard, president of the conservative Jamestown Foundation think tank in Washington, D.C., said he is unsure of whether the Russians plan to withdraw from Kherson, in part because he expected Putin to order his troops to hold the city at all costs, just as Adolf Hitler ordered the German army to turn occupied Soviet cities into fortresses that they were not allowed to abandon.

“They had been moving their best military units (elite airborne forces) into Kherson before this announcement,” Howard told Task & Purpose. “As well as thousands of new recruits to pile into the city so that the occupation forces could then be released to go to the Russian front lines, freeing up more manpower to combat the Ukrainian offensive.”

Considering National Security Advisor Jake Sullivan recently visited Kyiv, Howard said it is possible the Russian announcement about withdrawing from Kherson could be a signal to the U.S. government that it is interested in negotiating an end to the war, but Ukrainian officials have said they are not open to peace talks unless Russia returns all its occupied territory and puts Russian troops on trial for war crimes.

Army Gen. Mark Milley, chairman of the Joint Chiefs of Staff recently said he believes the Russians plan to retreat from Kherson to reestablish their defensive lines south of the Dnieper River, adding it could take the Russians weeks to move their 30,000 troops in Kherson across the river.

It should become clear over the next few days whether the Russians are withdrawing from Kherson or if they plan to stay and fight, but either way, the Russian occupation of Kherson is coming to an end, said Luke Coffey, a senior fellow with the Hudson Institute think tank in Washington, D.C.

“There’s no natural line of defense on the western shore of the Dnieper River,” Coffey said. “They’re very exposed. Ukraine’s use of [High Mobility Artillery Rocket Systems] and other indirect fire systems has really disrupted Russia’s ability to reinforce across the river, and I think they see the writing on the wall.”

Russian soldiers have also posted pictures and videos on Twitter showing that the Russians have already been moving heavy weaponry out of Kherson for weeks, he said.

However, it is possible that Russia’s retreat from Kherson could turn into a rout that could endanger Russia’s presence in southern Ukraine, Coffey said.

Even though winter is growing near, Coffey said he does not believe the fighting will stop when it gets colder. He also noted that Russia launched its invasion of Ukraine in February.

There are also indications that the Russian military has replaced many professional soldiers in the Kherson region with recently mobilized troops, he said. Those poorly trained draftees will have to spend the harsh winter a long way from home in a dire situation, while morale and motivation is high for Ukrainian forces, which have gone from defending their country to liberating it.

“Right now, we are in a period of this conflict, where anything is possible,” Coffey said. The Russian withdrawal from Kherson will be chaotic; it will not be orderly; it will not be by the book; and all it will take is for Russia to have a little bit of bad luck and for Ukraine to have a little bit of good luck, and then the Ukrainians are able to establish a foothold on the other side of the Dnieper River. When that happens,Russia could be in serious trouble because the terrain from Kherson to Crimea is relatively flat and there are very few — if any — natural defensive lines or obstacles that the Russians could defend from.”