An FBI agent had a surprise guest at his retirement ceremony: a Marine he rescued as a baby 22 years ago

"I wouldn't be a Marine. My family wouldn't be the same," Cpl. Stewart Rembert said before meeting the FBI agent who saved his life 22 years ago. 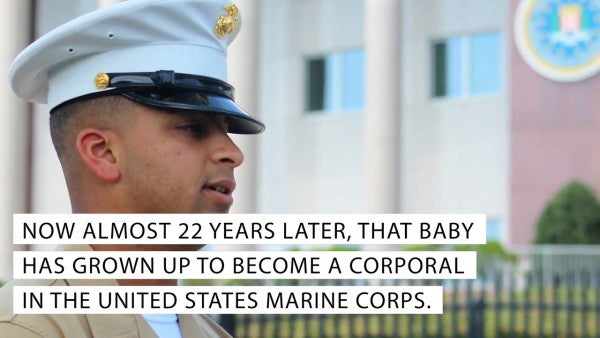 The two had met just once before in 1997, when Sowers rescued Rembert after he was kidnapped from the hospital just days after his birth.

Then a rookie agent, Sowers found Rembert 19 hours after he was abducted by a woman posing as a nurse at the hospital where he was born.

According to NBC News, Sowers tracked the kidnapper down and convinced her to bring him to where she'd left Rembert: Lying in a box next to a dumpster in Tacoma, Washington.

“We knew he had been out there for several hours,” Sowers told NBC. “When I picked him up, he was not crying, but he just nuzzled right into my neck and I knew he was fine.”

It was a happy ending to an otherwise tragic story, and the emotional reunion between the two served as a fitting way to round out Sowers' tenure at the FBI.

“I'm proud of anybody who serves others above themselves, and the fact that he is willing to serve this country in the United States Marine Corps, I think is just a perfect example of what we expect of everybody,” Sowers said in a video uploaded to the FBI's YouTube channel.

Rembert's appearance at the retirement ceremony at the Knoxville, Tenn., FBI headquarters was a surprise set up by Sowers' colleagues.

As Rembert entered the room to applause, the two hugged, and Sowers could be heard telling Rembert: “I'm really proud of what you did with your life. Pass it on, alright?”

Of the emotional reunion, Rembert told NBC News, “I'm going to meet the man that saved my life.”

“It's crazy to think that without his efforts I wouldn't be a Marine. My family wouldn't be the same,” Rembert added. “I'm just super excited and honored to meet this man today.”