Service Members And Families Enjoy Night Of ‘Combat Dining Out’

On Nov. 21, the servicemen and women at Edwards Air Force Base in southern California where stealth and other technologies... 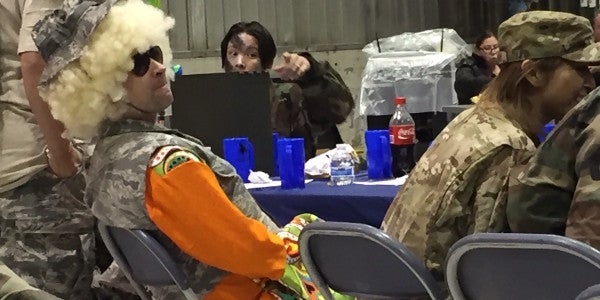 On Nov. 21, the servicemen and women at Edwards Air Force Base in southern California where stealth and other technologies are tested hosted the 25th annual celebration of “Combat Dining Out.”

The evening is a kind of overture with bits and pieces of Harvard's Hasty Pudding Club mixed in with traditions of the British military mess dining rituals, mashed up with pure Air Force jubilation in service.

“We have to have fun,” one of the base chaplains told me at the event. “Our young airmen are working 60-hour weeks, and this is a remote base that can be lonely for young people away from home for the first time.”

Noted by all the leaders in attendance was that security police from Edwards are among some of the most continuously deployed troops in the Air Force contingent serving overseas.

About 300 airmen and their spouses crowded into a massive hangar with Old Glory draped from the rafters. There was a table set for the base commander, his chief noncommissioned officer, and their wives reminiscent of the table in some iconic Arthurian court.

Plastic drinking mugs were set out by the hundreds at long tables, with one side of the hangar set out for the Blue Team and the other for the Red Team.

My Army veteran pal, Danny Bazzell, who is executive officer for the West Coast chapter of the Brotherhood of Tankers, brought me along to the revels at the invitation of Air Force Tech Sgt. Michael Burd, who leads the Air Force Sergeants Association at Edwards.

“I had no idea what to expect,” said Bazzell, who also is an officer of the Edwards Civilian-Military Support Group. “Now, I can hardly wait for next year.”

We sat across the table from servicemen and women who were outfitted for the evening as Forrest Gump, Lt. Dan, and and Forrest's best buddy from Vietnam, Bubba. The guy decked out as Bubba could recite every brand of shrimp ever fished from the cinematic bay for the Bubba Gump Shrimp Company.

The cast of characters sat a few seats down from an airman dressed as Boba Fett, the helmeted mercenary of Star Wars, and across from a hippie-fied airmen dressed in a bozo wig with flowers in his hair from the summer of love in San Francisco.

Weaving through the company of airmen and their families were ninja warriors and airmen wearing a mix of Middle East shemagh scarves, special operations gear, armed with squirt guns, water balloons, super soakers, and pails of water.

As it turned out, the messy tradition of combat dining out at Edwards has the mission objective of sharing a meal, ceremonial toasts, and unleashing the biggest squirt gun battle on the West Coast, ending with the lifting of glasses of “Grog” with all mugs slammed on the table as a salute to everyone in service everywhere.

Combat dining is all about straightforward fun without jumping the rails. It’s meant to be a morale event to purposefully to integrate men and women in the ranks together. The room was simply awash in airmen, officers and enlisted, all enjoying a few hours of fun, with a dozen or so rules of engagement.

For example, guests were required to wear combat attire, any combat uniform, or its equivalent (including ninja gear); as well as keep all toasts and comments within the limits of good taste and mutual respect; however, good natured humor was highly encouraged.

Mess hall-style burgers and hot dogs were served up by Korean-American immigrant restaurateur Jin Hur, whose son served a high-casualty deployment with the Marines in Afghanistan.

A few days in advance of Thanksgiving, Brig. Gen. Carl Schaefer, who commands the 412th Test Wing at Edwards, offered the toast for all troops serving in deployments worldwide, away from their families.

“We work hard, and we play hard,” Schaefer said. “And if anyone here has had a drink tonight, you are not driving! Go with your family or the [Airmen Against Drunk Driving] will help you get home.”

The streams of water flashed across the hangar, and the water balloons flew. The Blue Team was awarded for “Best Salutes and Toasts,” and the “Red Team” was honored for winning the water fight.