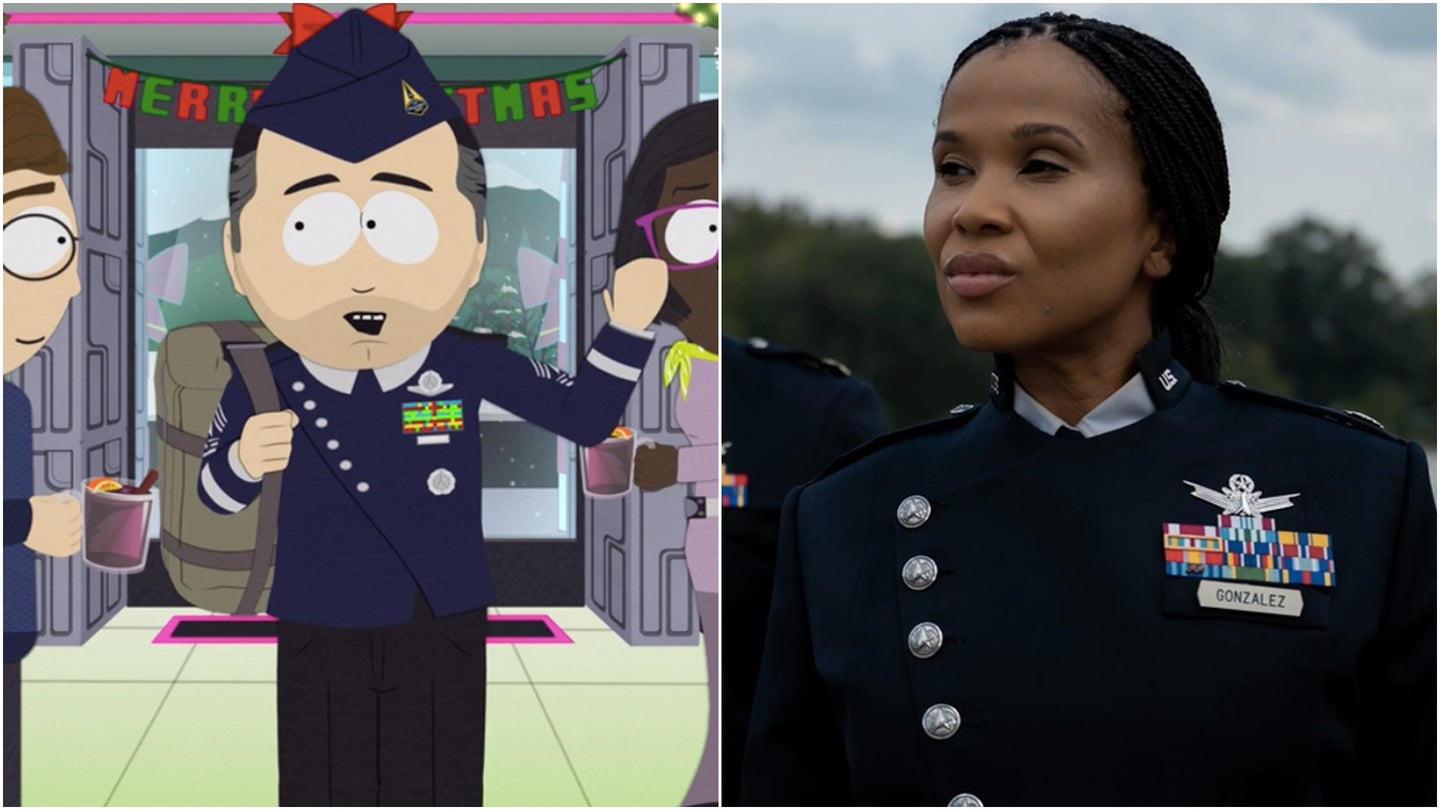 It’s a rare treat when a movie or TV show actually gets a military uniform right, and it’s even rarer when one nails a uniform that hasn’t even been adopted yet. But somehow the landmark, often controversial animated comedy series, “South Park,” pulled it off for Space Force.

In its new special “South Park: Post Covid 2,” Stan Marsh, as an adult, walks into a restaurant with a duffel bag over his shoulder, a five o’clock shadow on his face, and wearing the widely-ridiculed Space Force prototype uniform. The actual prototype uniform was just revealed in September, so it’s surprising to see “South Park” already include it in its animated wardrobe.

Stan’s dress blues include the prototype uniform’s grey collar, the Space Force pin over the chest ribbons, the strip of silver around the wrists, and, most importantly, the buttons cutting diagonally across the torso. They even got the number of buttons right: six of them to represent the Space Force as the sixth and newest branch of the military.

It’s not quite perfect though. A close look at the stripes on Stan’s sleeves reveals that the animators got the idea and key elements of the insignia right, but a few of the details are off. The Space Force Delta is in the center of the insignia, which would normally indicate that Stan is the Chief Master Sergeant of the Space Force, the top enlisted rank in the branch. However, if that is Stan’s rank, his insignia is missing a stripe at the bottom.

Additionally, the chevrons on top are pointier than they are in real life, and in some shots the stripes appear to still bear the central star from Air Force uniforms. Still, it’s pretty close, and “South Park” is known for its unique art style, rather than technical accuracy, so we’ll let it slide.

Another detail that seems off is Stan’s five-o-clock shadow. The military forbids facial hair unless the service member has a well-groomed mustache or a medical or religious exemption. But hey, maybe Chief Master Sgt. of the Space Force Stan Marsh has a no-shave chit.

In this case, it’s fitting that the Space Force uniform got a shout out on a comedy series known for mockery: The uniform was widely laughed at when it was revealed at the Air Force’s largest conference of the year on Sept. 21. In particular, the diagonal buttons were too futuristic for many onlookers, who compared the uniform to those worn by the crew of the science fiction starship Battlestar Galactica or of the Imperial Death Star from “Star Wars”.

The uniform is “fabulous in a ‘we just blew up Alderaan’ kind of way,” we reported at the time,

Some of the criticisms of the proposed uniform went below the belt, literally. Critics said the grey dress pants looked baggy and formless, offsetting the formal, tailored nature of a military uniform. Even the New York Times thought it looked awful. Style writer Steven Kurutz attached the pants as “saggy and baggy and in serious need of tailoring.”

In early October, the Space Force answered critics with a photo of tailoring scissors and measuring tape atop grey fabric with the text “We heard your feedback. New pants, new fit coming soon.”

In the South Park special, Stan’s pants appear to be a darker grey than those in real life. However, it’s hard to tell whether or not they are overly baggy, because the South Park character shapes in general all look the same. Ah well, we can’t have everything.

Another thing we can’t have is the story of how Stan even got involved in the Space Force. In the scene, Stan is greeted by a grown-up Kyle Broflovski, who asks “How’s everything on Mars?” to which Stan replies “Really cool, but I’m so glad to be home. How are the kids?”

Like Kyle, I too am eager to hear about the Space Force’s interplanetary deployments. But Stan, like a lot of other service members recently returned from overseas, probably wants to forget he was ever there for a few minutes. We can only hope for a part three in South Park’s “Post-Covid” series.

In the meantime, “South Park” may have gone out on a limb with one more detail: the garrison cap. Stan wears what looks like a similar cap that Air Force members wear, except it has a Space Force pin on it. It’s unclear whether this is accurate, but that’s because the Space Force has yet to release prototypes of its dress uniform caps.

We’re not the only ones to appreciate the Space Force nod. Commenters on the popular Facebook page Air Force amn/nco/snco were excited to see the newest branch get some time in the spotlight. Specifically, several appreciated that the actual Chief Master Sergeant of the Space Force, Roger Towberman, was quasi-represented in Stan’s uniform.

“Or has Towberman been on South Park this whole time?” wrote another.

Anyway, bravo “South Park,” and congrats to the Space Force for having been parodied twice in as many years.

Want to write for Task & Purpose? Click here. Or check out the latest stories on our homepag