Is This The U.S. Military’s First Peacetime Screw Up?

The military community, and really most people with eyes, took offense when a member of the Wisconsin National Guard posted photos... 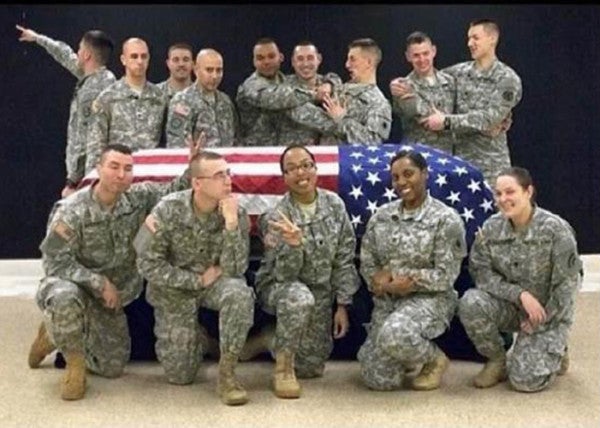 The military community, and really most people with eyes, took offense when a member of the Wisconsin National Guard posted photos on her Instagram account of her jovially posing with an empty flag-draped coffin with several other soldiers.

“We put the FUN in funeral,” the caption read.

In another photo, she took a selfie in a car, and said “It's so damn cold out … WHY have a funeral outside!? Somebody's getting a jacked up flag.”

I guess someone took the fun out of funeral that time.

“It’s actually a selfless commitment she has made,” he said, according to the New York Daily News. “These practice sessions are very long. It’s good to let loose a little. When your job constantly asked you to be serious. And no there’s no one in the casket.”

The pictures were international news and created national outrage.

The images took us somewhere we’ve been a few times over the past 12 years; you know, the place where people in uniform do something dumb and then compound their stupidity by taking photos or videos of it.

But there was something distinctly different about the latest episode from the urination scandal that plagued the Marines in Afghanistan or the actions of the Army at Abu Ghraib in Iraq.

Gone is the stress of combat, the perils of war. Absent is the threat of death, the isolation of being thousands of miles away from home.

That's what separates this from the urination scandal and Abu Ghraib. While certainly devoid of morality, those events carried with them a certain “War is Hell” component.

And I don't care what her sergeant says about how strenuous the rehearsals are, “Funeral Detail is Hell,” just doesn't carry the same weight.

What Harrison did was less a military mistake and more a juvenile one. For reference, there’s a tumblr page about people taking selfies at funerals. Save the ACUs, what's the difference?

But there’s a concern that now that the wars are nearly over, this may be the new military.

The concern of many senior military leaders is that as the U.S. military closes the book on more than a decade of war, there will be colossal mistakes as the armed forces attempts to ratchet down his tone, style, and tempo to meet peace a time for peace.

It's an “idle hands are the devils workshop” sort of thing. Think Tailhook after the Gulf War or the violent images of blood pinnings gone too far. These were peacetime mistakes, completely unrelated to war.

Setting aside for a moment the criticisms of Gen. James Amos, the Marine commandant, when he pushes for “professionalism,” this is the sort of nonsense he's trying to avoid.