“I have no idea what this means and I served in the Navy for 20 years." 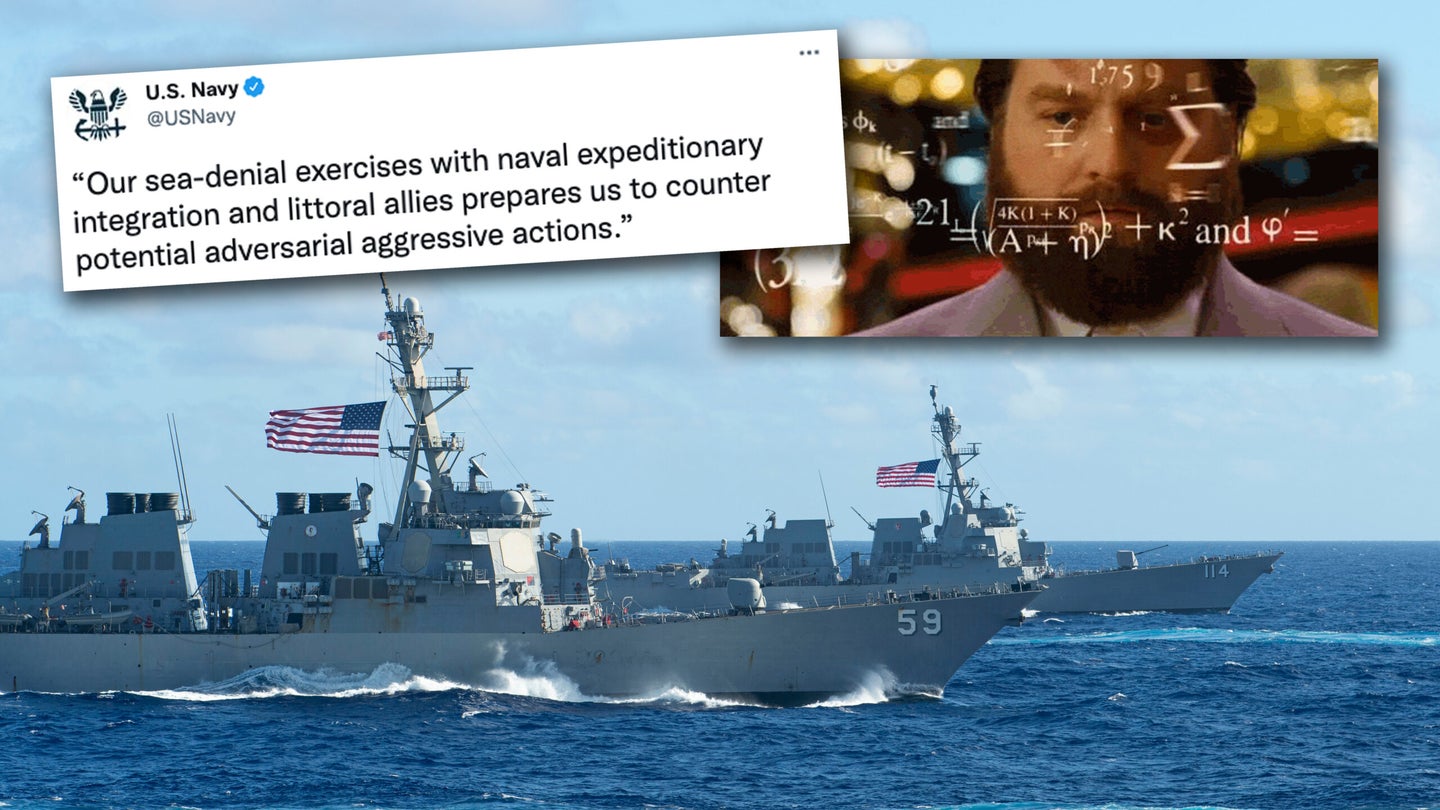 The Navy’s greatest challenge may not be China, “great power competition,” or protecting global commerce. Instead, the sea service needs to overcome its affinity with complex jargon and speak to Americans in a language they can understand.

On Feb. 9, the Navy’s official Twitter account shared pictures and a video from Noble Fusion 2022, a naval exercise in the Philippine Sea, along with the caption: “Our sea-denial exercises with naval expeditionary integration and littoral allies prepares us to counter potential adversarial aggressive actions.”

“I have no idea what this means and I served in the Navy for 20 years,” Luria wrote when she retweeted the Navy’s cryptic spirit message. “And you wonder why Americans don’t understand why the Navy is essential to many aspects of their daily life?”

On Thursday, Task & Purpose asked Luria point-blank whether she feels the Navy has a problem explaining in plain English to the American public what security threats the service is facing and how it is countering them.

“My answer is yes,” Luria said, harkening back to her original tweet about not being able to understand the Navy’s tweet about the naval exercise, which involved the aircraft carrier USS Abraham Lincoln’s strike group; the amphibious assault ships USS America and USS Essex along with the other ships their ambitious ready groups and embarked Marines; and vessels from the Japanese Maritime Self Defense Force.

Luria eventually deciphered what the words in the Navy’s tweet meant, but as a career Navy officer, she felt the caption did not adequately describe the importance of holding such exercises.

She also commended Adm. John Aquilino, head of U.S. Indo-Pacific Command, and Adm. Samuel Paparo, commander of U.S. Pacific Fleet, for “trying to be more visible” about Navy operations in the Pacific.

“But I do think that the Navy – if you want to just sell the average person who might be happening to be following the Navy on Twitter, it needs to be in plain language and they need to understand this is showing the American flag; This is maintaining world order,” Luria said.

It does not help when Navy officials use esoteric terms such as “sea lines of communication” and “choke points” to explain threats to global commerce, she said. Instead, the Navy needs to explain that it operates in areas where two-thirds of the world’s oil passes through and explain how the crisis to the global supply chain created when the container ship Ever Green became stuck in the Suez Canal in March 2021 could have been much worse if had taken longer to free the ship.

“Those are the kinds of things that the average person just isn’t thinking about on a daily basis,” Luria said. “So, I think the Navy’s communication should constantly beat that drum about how important having a Navy is and the role that they are playing around the world in all aspects of our life and national security.”

When Luria was finished, retired Adm. Bill Moran, former vice chief of naval operations,  provided his own explanation for the Navy’s problems with the English language. “You know, maybe to be sarcastic for a moment: Maybe we speak like that to confuse our adversaries,” Moran said.