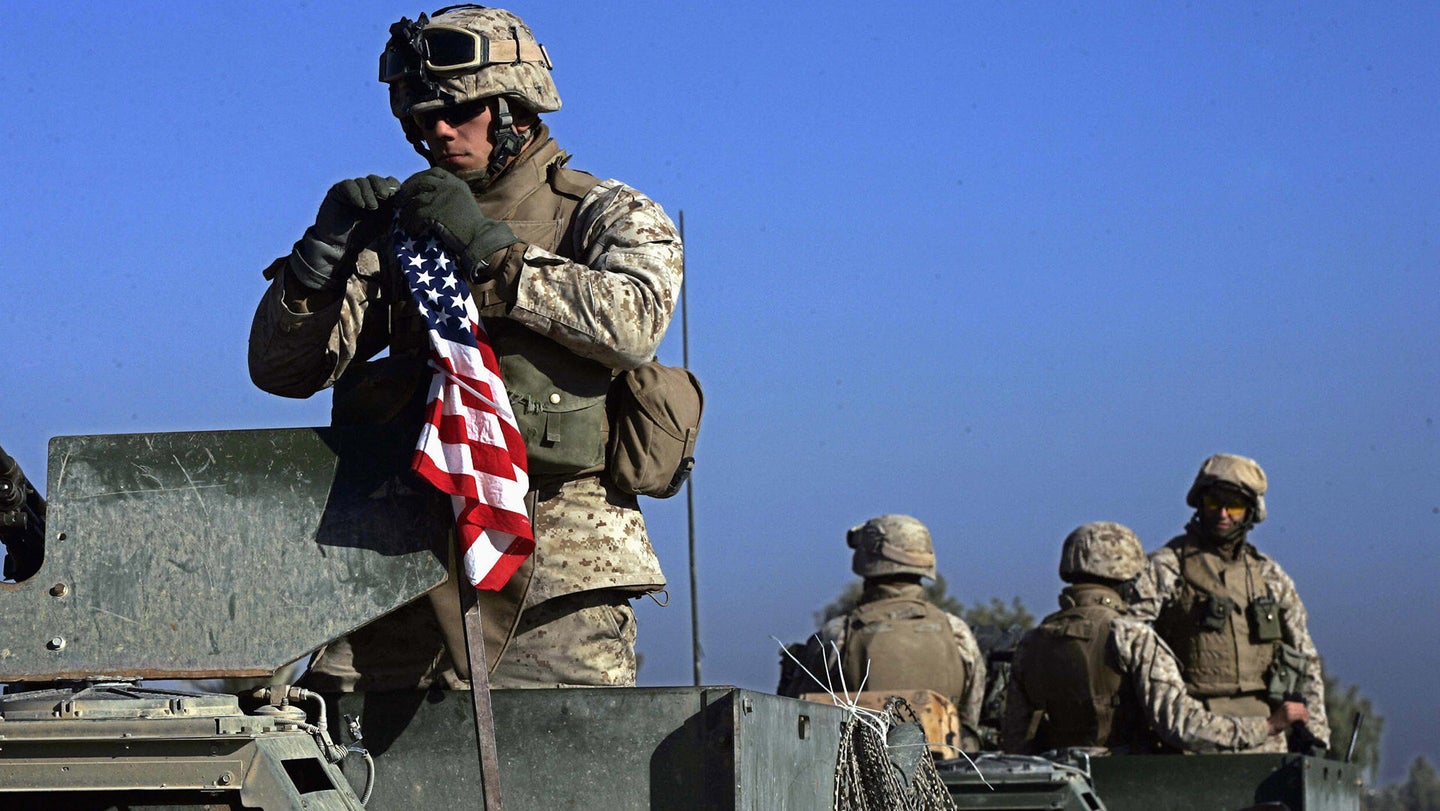 FILE PHOTO: A Marine hangs an American flag atop his Humvee during a sweep through the Zaidon market, located southeast of Fallujah, during an operation, 15 November, 2005. (DAVID FURST/AFP via Getty Images.).
SHARE

It would be very difficult for a generation of service members and veterans who have known nothing but war to comprehend what life in America was like before Sept. 11, 2001.

There was a time from when the Berlin Wall fell to when the World Trade Center’s twin towers fell that the United States appeared to be invincible.

The conflicts fought during the 1990s were relatively quick and mostly decisive, with the notable exception of the U.S. military’s mission to Somalia that resulted in the Battle of Mogadishu later made famous in the book “Black Hawk Down.”

Following the crushing defeat of Saddam Hussein’s forces in the first Gulf War, then-President George H. W. Bush proclaimed to a group of conservative state lawmakers in March 1991, ”By God, we’ve kicked [the] Vietnam syndrome once and for all.”

With the fall of the Soviet Union later that year, America’s defeat in Vietnam suddenly looked like an anachronistic speed bump on the road to ultimate victory in the Cold War. The U.S. military, which had been greatly strengthened under former President Ronald Reagan, was clearly without peer. Any country insane enough to challenge the United States militarily would be smashed in a matter of weeks, if not days.

Throughout the 1990s, U.S. troops were dispatched to the former Yugoslavia on missions that seemed to underscore America’s military might. NATO’s campaign to assist Kosovar Albanians against the Serbs was conducted entirely from the air. Even though the airstrikes were far from crippling, the notion of ground combat no longer seemed relevant.

The myth of America’s invincibility did not wear off immediately after the Sept. 11 attacks. Initially, the United States was able to rout the Taliban with a handful of special operators and CIA officers backed by overwhelming airpower.

America had seemingly avoided the trap of sending thousands of troops to the “Graveyard of Empires,” and we all had a good laugh at the Russians.

Things began to change with the March 2003 invasion of Iraq. This was not the Gulf War, where Americans were awed by grainy television images of smart bombs blowing up targets with God-like accuracy. This became a war of ambushes, roadside bombs, and enemies who did not wear uniforms.

Troops on the ground stacked up to clear rooms as the war devolved into urban fighting. Every trip outside the wire became as suicidal as going over the top in World War I. The term “Improvised Explosive Device” – or “IED” – became synonymous with death and severe injury.

Advances in technology saved the lives of countless troops who would have died in previous wars, but they also had to endure blast-related injuries that left them in soul-crushing pain. It would take years for the military to acknowledge that service members who survived blasts seemingly unscathed were actually suffering from mild Traumatic Brain Injury.

The military and Department of Veterans Affairs gave the Forever War generation dozens of pills – too many to count – to keep them whole. Many washed down their meds with alcohol, a potentially fatal combination.

Suicide has been the scourge of the Forever Wars. More than 30,000 service members and veterans have died by suicide since Sept. 11, 2001, and that is more than four times the number of troops killed in combat.

The Global War on Terror has been a bleeding wound for much of the world. Since 2001, at least 801,000 people have died across the globe, of which 42% were civilians, a 2019 study by Brown University found.

The enduring legacy of Sept. 11 is how the American concept of war has changed. Wars are no longer quick and easy. They are endless, and while troops deploy to combat zones over and over again, most civilians have no idea who they are fighting or why.

For those who have taken part in the post Sept. 11 wars, cynicism runs deep. Many veterans took part in the Jan. 6 Capitol Hill riot, showing the painful divisions among troops and veterans about whom they trust and which facts they believe.

It will be up to the Forever War generation to begin the healing. Those who have survived have an obligation to succeed where the Baby Boomers failed and stop the United States from sending its sons and daughters into harm’s way for unattainable goals.

Your task will be to prevent future generations from being treated as if they were expendable.