The Department of Defense has a major gun control problem. On May 26, Amnesty International published a damning report revealing... 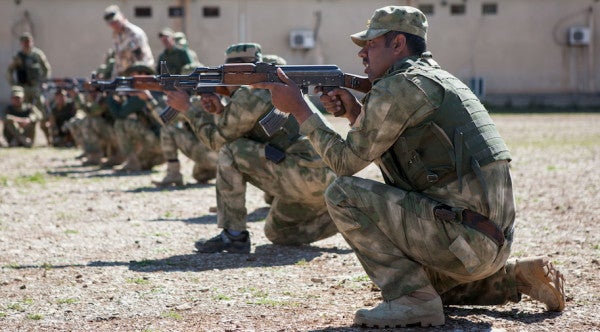 The Department of Defense has a major gun control problem.

On May 26, Amnesty International published a damning report revealing that the United States failed to track more than $1 billion in arms transfers to Iraqi and Kuwaiti security forces as part of Operation Inherent Resolve. The report, based on a now-declassified 2016 DoD audit obtained via Freedom of Information Act requests, shows that terrible record keeping and loose restrictions potentially let weapons from machine guns to mortar rounds fall into the hands of ISIS.

Less than a week later, Pentagon officials announced that U.S.-backed coalition forces had officially started arming members of the Syrian Democratic Forces (SDF) ahead of the assault on ISIS’s de facto capital of Raqqa.

The new weapons transfers to U.S.-backed fighters, ordered by President Donald Trump in early May over the objections of regional NATO ally Turkey, have not gone over well. In one of his first teleconferences from Baghdad as OIR spokesman, Col. Ryan Dillon faced harsh questioning from Washington Post reporter and Marine veteran Thomas Gibbons-Neff, who pointed out that Dillon’s predecessor had pledged to “keep account of every single weapon supplied to the SDF and ensure that they’re not pointed at anyone except [ISIS].”

Every single one of these weapons that will be provided to our partner forces will be accounted for and pointed at #ISIS. #defeatDaesh

“How exactly do you plan on executing that?” Gibbons-Neff asked. “I can't think of a time where we've supplied weapons to proxies and not have them turn up in the wrong hands.”

“Whenever we sign up for something, you know, we go through every serial number,” Dillon offered as an answer. “And that is the same kind of process at the commander level that we are going to go through to make sure that we have accountability of the weapons and the equipment that we are providing the SDF.”

Before picking up their shiny new M4s from coalition trainers, local fighters go through a vetting process and enter into a documented agreement to “fight only ISIS and uphold the laws of armed conflict,” Dillon added. Additionally, U.S. commanders, “will sign for, by serial number, all the equipment that we are giving and we'll maintain that in our database.” If it’s going downrange, coalition troops will keep track of it.

Many of the Western weapons and equipment distributed like candy to battlefield partners in Iraq and Afghanistan since the start of the Global War on Terror have wound up in the hands of terrorists regardless of oversight efforts. A 2015 Amnesty report indicated that the majority of ISIS’s arsenal “comes from stockpiles captured from the U.S.-allied Iraqi military and Syrian rebels”; even airdrops of small arms meant for regional allies can fall into ISIS hands, as they have in Syria, thanks to a disastrous gust of wind.

Related: Over $1 Billion In US Army Equipment Lost In Iraq Could Fall Into ISIS Hands »

Based on that recent history, there’s little comfort in Dillon’s vague tough talk of coalition military advisers peering over some SDF recruits’ shoulders during block-by-block firefights. A 2016 investigation into 14 years of DoD weapons contracts by the weapons proliferation non-profit Action on Armed Violence revealed that of the nearly 1.5 million firearms the Pentagon provided to security forces — including 978,000 M16 and M4 assault rifles — DoD officials only had records for around 700,000 weapons.

“This only accounts for 48% of the total small arms supplied by the U.S. government found in open source government reports,” AAV said in a statement at the time. “Such shortfalls highlight the lack of accountability, transparency and joined up data that exists at the very heart of the U.S. government's weapon procurement and distribution systems.”

The problem has been especially pronounced in recent years. A 2014 report from the Special Inspector General for Afghanistan Reconstruction (SIGAR) found that of the 474,823 weapons with serial numbers recorded in the Afghan National Security Forces’ Operational Verification of Reliable Logistics Oversight Database (OVERLORD), 203,888 — a whopping 43% — had “missing information and/or duplication,” making tracking them near impossible. It’s not that those weapons are all “lost” or in the hands of ISIS or the Taliban — officials just aren’t sure what happened to them.

More often than not, it is Iraqi and Afghan security forces, from army commanders to police captains, who are responsible for the flow of shiny new American equipment onto black markets, inflating payrolls with “ghost soldiers,” and hoarding everything from extra paychecks to arms and ammunition in the hopes of turning a quick buck, according to a 2014 investigation by the New York Times.

“I told the Americans, don’t give any weapons through the army — not even one piece — because corruption is everywhere, and you will not see any of it. Our people will steal it,” Iraqi Col. Shaaban al-Obeidi told the Times. “If each soldier is supposed to get 100 bullets, he will only get 50, and the officer will take and sell the rest.”

But the problem isn’t just limited to corruption and shoddy record keeping. In March 2015, the Washington Post reported that the DoD was “unable to account” for $500 million in military support provided to regional forces allied with president Abd Rabboh Mansour Hadi in Yemen after Iran-backed Houthi rebels toppled the country’s central government the previous January. The Pentagon believes that the arsenal, which included 200 Glock 9mm pistols, 200 M4 rifles, and more than 1,250,000 rounds of ammunition, likely ended up in the hands of Houthi rebels or al Qaeda.

“Even in the best-case scenario in an unstable country, we never have 100 percent accountability,” one defense official told the Washington Post at the time.

These weapons circulate among dangerous hands faster than the United States can keep up. In late 2012, U.S. and European weapons sent to Qatar and the United Arab Emirates somehow ended up in the hands of jihadists in war-torn Libya; in Somalia, U.S. arms provided to Uganda and Burundi, partners in the campaign against al-Shabaab, ended up in the hands of Somali militants.

In effect, once a weapon leaves U.S. military custody, there’s a 50-50 chance that it’ll be long gone the next time a DoD official decides to check in.

Dillon can wag his finger at the SDF all he wants from his podium in the Pentagon press room, but that won’t stop corrupt regional allies — and sloppy bookkeeping by DoD personnel — from pilfering from the coalition’s arsenal. And until the gun-running stops, American troops could find themselves pinned down in a firefight against the very weapons that were supposed to defend and protect them.