The Army plans to take a step forward in eliminating the military gender gap by requiring men and women to... 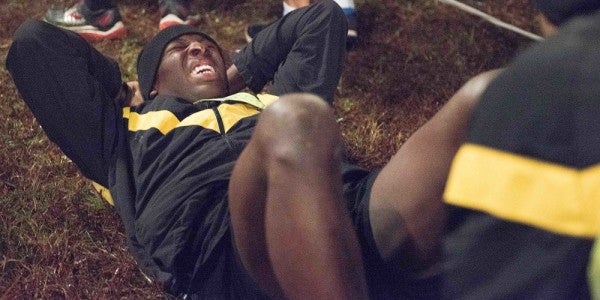 The Army plans to take a step forward in eliminating the military gender gap by requiring men and women to meet the same standards on the service’s proposed new physical fitness test.

Army Secretary Mark Esper told reporters on Thursday that he believes the new test should have both gender- and age-neutral standards “because the enemy does not specify who they’re going to shoot and not shoot. Combat is combat.”

Esper covered a wide range of other topics during the Pentagon news conference, including the possibility of reducing the Army’s presence in Kuwait to give soldiers more dwell time at home between deployments.

On fitness, Esper did not provide any details on what the new test would entail, but he reiterated that male and female soldiers will have to meet the same physical standards.

“That’s the direction we’re moving in: a gender-neutral physical fitness test,” he said. “By the way, the women I’ve talked to want that.”

The Defense Department allows each of the services to set different standards for troops based on gender and age. But last year’s Marines United scandal showed that many male service members feel women in the military are not worthy of respect because they are not required to be as strong and fast as men.

For the current Army Physical Fitness Test, male soldiers between 17 and 21 years old must complete 71 pushups within two minutes, run two miles in 13 minutes, and complete 78 situps to get perfect scores. Female soldiers in the same age range must do 42 pushups, complete the two-mile run in 15 minutes and 36 seconds, and also do 78 sit ups to get full credit on each event.

The double standards lead male service members to assume that female troops are less physically capable than men, when in fact women in the military have been asked to do less for decades, said retired Marine Lt. Col. Kate Germano, who was in charge of training female Marine recruits at Parris Island.

“I saw first-hand on recruiting duty and at Parris Island that when women were held to higher standards for performance, they rose to the challenge every time,” Germano told Task & Purpose. “The rate at which women Marines are excelling at doing pull ups is a great example of this.”

An advocate for gender equality within the military as a whole, Germano has authored an upcoming book, “Fight Like A Girl,” about her experiences trying to improve the physical performance of women in the Marine Corps. (She was relieved of command at Parris Island for creating a toxic environment, but she and her supporters claim she suffered retaliation for pushing female recruits to meet the same standards as men.)

“Women in all of the services are proving they have what it takes to get stronger and faster,” Germano said, “and making the physical fitness test gender neutral will not only hold everyone to the same high standards, but will go far to eliminate both negative perceptions about the capabilities of women and mistrust due to double standards for their performance.”

During Thursday’s news conference, Esper also said the Army’s deployment-to-dwell ratio is now close to 1:1, meaning soldiers are not getting enough time at home. One reason for the high operational tempo is the Army is rotating brigade combat teams through Europe and Korea while soldiers are still engaged in Afghanistan and the Middle East.

To ease the strain, Esper said he has talked with defense officials about curtailing deployments and training missions that aren’t critical.

“An example is we have an IBCT deployed in Kuwait,” Esper said. “Can we get relief from that mission and bring that unit home so we can get its readiness up to a higher level; put it in the queue for more important deployments out there; and really increase that deploy-to-dwell time to something higher than 1:1?”

The Army is not considering withdrawing from Kuwait altogether, said Esper, who has talked with the Joint Staff and the Army’s operations staff about reviewing the service’s commitments in multiple theaters.

“It may not necessarily mean pulling anything; it may mean keeping a battalion ; or it may mean a different rotation schedule – maybe you’re not there full time,” Esper said. “It’s something we have to look at if we’re going to try to reduce the deployment churn and increase the readiness of our units.”

When asked if a Marine unit could possibly deploy to Kuwait instead of an Army brigade, Esper said: “I’m not sure that helps the Marines, but that would be an option.”