A Plan To Fix The Navy’s Broken Ship Naming System

As a Marine, I’m an amateur when it comes to U.S. Navy ship names. I’ve always thought they were a... 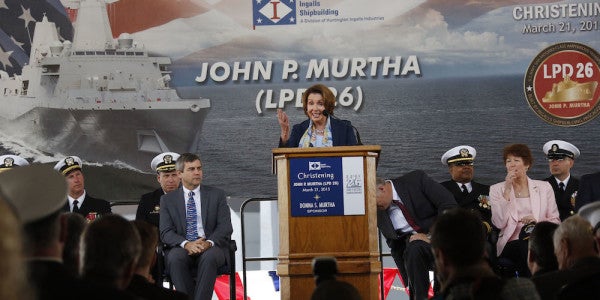 As a Marine, I’m an amateur when it comes to U.S. Navy ship names. I’ve always thought they were a smattering of people and places without any rhyme or reason. When I looked into it a little, I found that my perception wasn’t too far off.

There used to be a system that the Navy paid at least a passing nod to, but for the past few decades, it has pretty much abandoned that scheme. Ships used to have fairly common sense names. Battleships were named after states. Cruisers were named after cities. Submarines were quite fittingly named after fish.

However, as a quote sometimes attributed to Adm. Hyman Rickover says, “Fish don’t vote.” Ships are paid for by Congress, so ship names often just so happen to be ones that the Department of the Navy thinks might make congressional leaders happy. This has led to several controversies, such as naming a naval supply ship after the pacifist labor leader Cesar Chavez, and naming a submarine after popular Congressman Henry Jackson.

So, while we often see great presidents like Theodore Roosevelt, or heroes like Jason Dunham, honored with ship names, we also see some weird outliers, like the dry cargo ships named after Amelia Earhart and Medgar Evers — great Americans, but not naval heroes, or even really people with any significant connection to the naval services at all. There are so many exceptions to the system it’s no longer a system.

In general, naming anything lasting after a living person is both unwise and gauche. While George H.W. Bush is indeed both a naval hero and a president, he was alive when the carrier USS George H.W. Bush was commissioned. So was Jimmy Carter when the attack submarine USS Jimmy Carter was named. That one was also a break from other recent attack subs, which have been named after states as well as a Seawolf, whatever that is. Those names were themselves breaks from the previous tradition of naming attack subs after cities, which was itself a change from the original tradition of naming them after fish.

Other recent ships named after living people, such as the USS Nitze and the USS Gabrielle Giffords, were named after non-veterans, who made notable contributions to their country, but never in a uniform of the naval service.

Before the USS Carl Vinson got us started down this road in 1970, there had been only one living person honored by a naval ship since the Thomas Jefferson in 1814. While I’m sure Giffords and Nitze are great people, and even more so presidents Bush and Carter, they’re no Thomas Jefferson.

When politics enters the process, we all too often end up with muddled choices. One of the worst examples of this is the San Antonio-class amphibious transport dockship, USS John P. Murtha, breaking with the admittedly short tradition of ships of that class being named after cities. A decorated former Marine, yes, but one who grandstanded to the press before evidence was in on Marines accused of killing civilians in Haditha, saying they killed Iraqi civilians “in cold blood.” Later, all but one were exonerated or had charges dropped. Even more damning, he was an unindicted co-conspirator in the explosive 1980 Abscam scandal and the subject of several other FBI probes.

Getting back to a consistent ship naming convention would ensure that more of our military heroes, historic battles, and even beloved cities and states are properly honored, while taking out at least the most blatant political plays. As a side benefit, casual naval observers and members of services other than the Navy would be able to identify types of ships by name more easily. If Congress passed a law mandating this, the secretary of the Navy would be forced to pander to leadership in some other way.

There are more ship types than can be mentioned here, but here are a few major ones and how they should be named. If we start now, at the current rate of ship building, this will all be sorted out in just 50 to 100 years.

Destroyers and frigates/littoral combat ships. Sailors and Marines who displayed heroism in battle. We have a major backlog of Medal of Honor recipients, all of whom would be well-deserving.

Submarines. I always liked the idea of naming subs after fish and sea creatures. We could even refine it to have attack subs named after fish and the missile subs named after whales, if only because then a seaman could serve on the USS Sperm. That said, the convention of naming boomers after states and attack subs after cities seemed to work well from the 1970s until recently and would give the opportunity for some hometown pride.

Support ships. For non ships-of-the-line, I think a little more latitude is appropriate. These ships should be named after significant Americans who served in the Navy or Marine Corps, but whose most famous contributions occurred either not in combat or after their naval service. Your Neil Armstrongs, John Philip Sousas, and other accomplished Navy and Marine veterans should be honored here.

This system shorts heroes from other services, politicians, and other historic figures who certainly rate being honored. But, the military has plenty of weapons systems and buildings that need names, some of which will last longer than any ship. Hopefully, they won’t have a colossal failure of a weapons system named after them, like the DIVAD anti-aircraft gun legendary World War I hero Sergeant Alvin York was stuck with. Greatness stands on its own, all we can try to do is honor it as best we can.