“No more ‘boys will be boys.’ The Air Force can finally treat it like a crime." 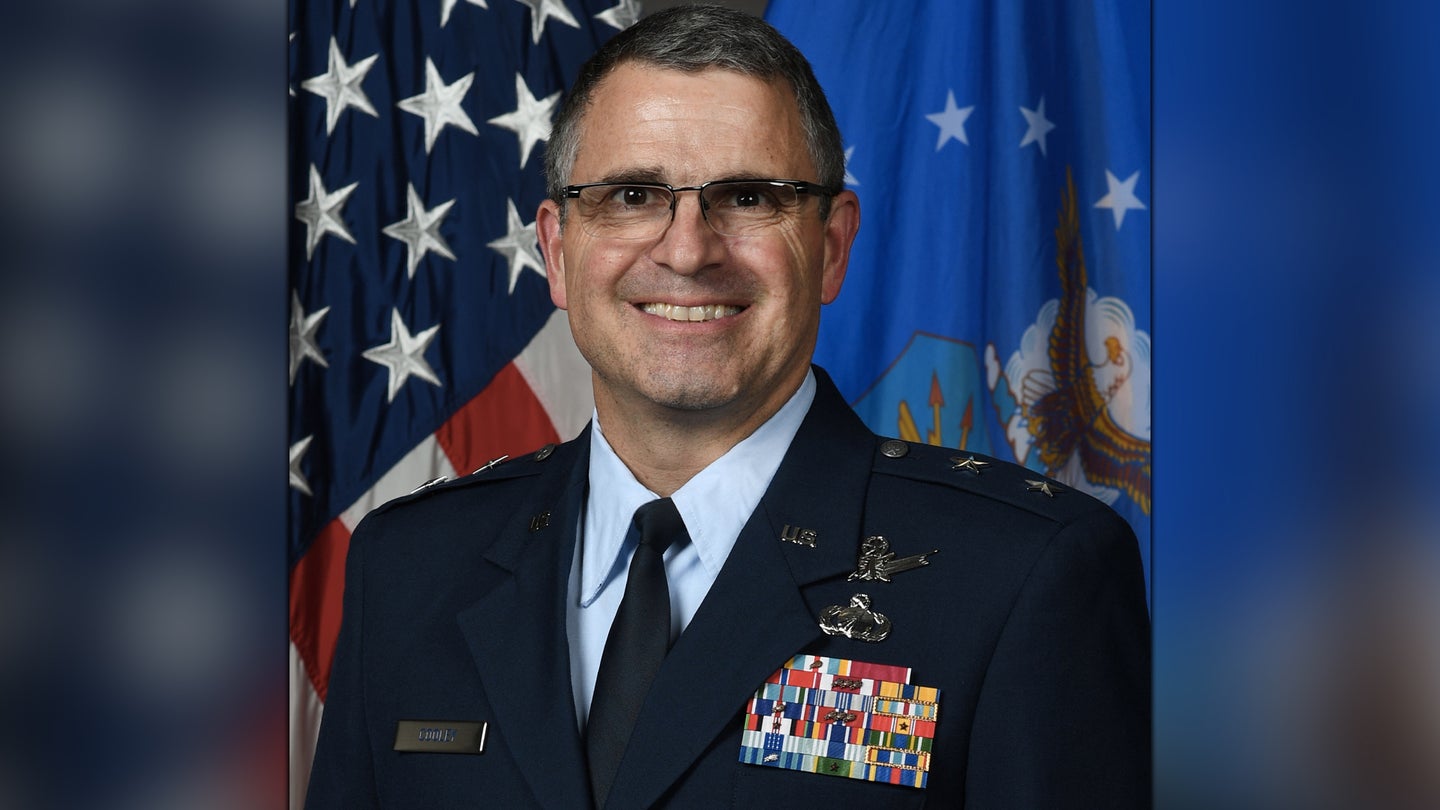 Military legal experts say that Saturday’s conviction of a two-star Air Force general of abusive sexual contact in the service’s first-ever court-martial of a general officer represents a significant cultural change that will hopefully send a message to future victims and perpetrators of sexual assault and harassment in the military.

“I hope this represents a cultural opprobrium,” against sexual assault and harassment, said retired Air Force Lt. Col. Rachel VanLandingham, a former judge advocate who now teaches at Southwestern Law School. “No more ‘boys will be boys.’ The Air Force can finally treat it like a crime. That I think is an indication of a cultural shift that is a long time in coming.”

Air Force Maj. Gen. William Cooley was chief of the Air Force Research Laboratory in August 2018, when he was first accused of making unwanted sexual advances by kissing and touching a female civilian. He was charged with three counts of sexual assault under the Uniform Code of Military Justice. After a week-long court-martial at Wright-Patterson Air Force Base, Ohio, Cooley was found guilty of one specification of the charge of abusive sexual contact for forcibly kissing the victim, who during the trial was revealed to be his sister-in-law, in a car after a barbecue in Albuquerque, New Mexico.

Cooley faced a maximum punishment of dismissal from the service, forfeiture of all pay and allowances and confinement for seven years. However, on Tuesday, Air Force Materiel Command announced that the military judge, Col. Christina Jimenez, had sentenced Cooley to a reprimand and forfeiture of $10,910 per month for five months. One legal expert said that the lack of jail time may come as a surprise given the severity of the charges pressed against him, which included touching the victim’s genitals without her consent.

“I definitely understand the disappointment people have about the sentence, but based on the judge’s findings, I did not expect more than what she gave,” said retired Col. Don Christensen, the former chief prosecutor of the Air Force and president of the advocacy group Protect Our Defenders.

Cooley will also likely soon retire at the rank he held before committing abusive sexual contact, which in his case was the one-star rank of brigadier general, Christensen said. However, this is not part of the general’s punishment. Cooley will likely still receive a retirement pension, having served in the Air Force since 1988, though his pension as a one-star general would be less than that of a two-star.

The general’s case was not heard before a jury. When the trial began on April 18, the Air Force announced that Jimenez had approved the defense team’s request for trial by military judge alone. Though Christensen thought Jimenez’ sentence was appropriate given the crime Cooley was convicted of, he wondered why Jimenez had convicted the general of one crime and not the others. Cooley and his sister-in-law were the only witnesses to the alleged crimes, so the case seemed to come down to the victim’s word against the general’s.

“It was a confusing verdict,” Christensen said. “I don’t know how you believe he gave a forcible kiss but didn’t touch her. That doesn’t make sense. But I was not at the court-martial and the judge deliberated for a long time, so I assume she had a reason for what she did.”

VanLandingham held a similar view of the verdict. It seemed arbitrary to her to believe the victim beyond a reasonable doubt for one portion of her testimony but not the rest. “My eyebrows are a bit raised,” she said. “You either believe the witness or you don’t.”

However, VanLandingham’s main concern had more to do with the sentence than the verdict. She believed that the reprimand and $54,550 forfeiture did not send a strong enough message to deter similar crimes in the future. The retired officer pointed out that Congress has established a mandatory minimum sentence of dishonorable discharge for enlisted service members and dismissal for officers convicted of rape, but it has not established a mandatory minimum punishment for forcible kissing.

“If this is a crime you feel is so harmful a judge can sentence up to seven years in Leavenworth, why not make the dismissal mandatory if found guilty?” she asked.

The sentence also highlights a discrepancy between how officers and enlisted service members are punished after being convicted of a crime. One of the punishments that enlisted service members can expect to receive after being convicted of a crime is a reduction in rank, VanLandingham explained. For example, a senior non-commissioned officer in the Army could be busted all the way down to private or the equivalent in another service.

However, officers cannot be sentenced to such a reduction in rank, at least not as a punishment after being found guilty in a court-martial. The reason for this goes back to the military hierarchy the American military inherited from its British forebears, where officers came from nobility and were thus treated differently than their enlisted subordinates, Christensen explained. Though convicted officers like Cooley are often reduced in rank during their separation process, it does not carry the same weight had the reduction been included as part of criminal punishment.

“I think it’s time to change that without a doubt,” Christensen said. “There’s no reason in 2022 why we should treat officers differently than enlisted service members” convicted of the same crimes.

Though reducing Cooley in rank was beyond Jimenez’s power, VanLandingham and Christensen agreed that the judge might have done more to send a stronger message in this case.

“While from a myopic viewpoint the sentence seems proportionate to the one count Cooley was convicted of, the law requires the judge to consider the need for the sentence to promote adequate deterrence and promote respect for the law which this sentence fails to do,” said VanLandingham. “The government asked for a dismissal because without this specific punishment, this convicted felon will be honorably retired from the Air Force and be able to wear his uniform at events and represent the entire Air Force, never mind receive taxpayer money monthly for the rest of his life.”

“The judge could have sent Cooley to jail for a week, which would have been a statement to see a general officer put in handcuffs,” said Christensen, “but that was her discretion.”

The retired colonel pointed out that other Air Force generals have gotten away with much less after allegedly committing even more serious crimes. In 2004 Maj. Gen. Thomas Fiscus was found by the Air Force Inspector General found to have made inappropriate sexual advances on 13 women. In 2005 the Air Force Inspector General found that Brig. Gen. Richard Hassan had sexually harassed female subordinates and created a hostile work environment. However, these generals were kept from facing court-martial by their peers at the top of the Air Force.

Cooley’s defense team said that the reprimand and $54,550 punishment was more than adequate punishment.

“The imposition of a letter of reprimand and significant financial penalties is actually a very significant sentence,” said the general’s civilian lawyer, Daniel Conway, according to Military.com. “And so I think the military judge here did send a message that she was in fact taking this seriously.”

Cooley himself pledged to do better, and he started by “apologizing sincerely and genuinely” to his sister-in-law and the rest of his family “who have been hurt,” wrote Military.com.

“I can honestly say I have come out a better human being than I was in 2018,” the general said. “I will work for the rest of my life to be a better person than the one who was portrayed in this trial.”

No matter the sentence, Christensen said the conviction represented a much-needed step forward for the Air Force.

“I have no doubt that if the military wasn’t under the pressure it is to deal with sex assault, Cooley would have been allowed to quietly retire,” said Christensen. “Sadly there have been many other general officers who have committed crimes who were allowed to just retire, so I’m hoping this is a key change to hold general officers accountable.”

Despite her own misgivings about the sentence, VanLandingham was also optimistic about what the conviction might mean for the future of the service.

“I applaud the victim for having the courage to come forward,” said the retired officer, who also commended the convening authority, Gen. Arnold Bunch Jr., for deciding to prosecute a fellow general.

“That is a cultural change and I commend the Air Force for changing and recognizing the harm sexual assault causes, not just to the victim but to the Air Force as a whole, and therefore to the country,” said VanLandingham, who admitted that, if she had a daughter, she would not want her to join the Air Force after the sexual harassment she experienced during her years in the service. But Cooley’s trial shows that things may be changing for the better.

“The very fact of this court-martial and conviction raises confidence” that victims will be heard and perpetrators will face due process, she said.