The airmen dodged Iranian ballistic missiles mid-flight to return to the base to provide search and rescue support. 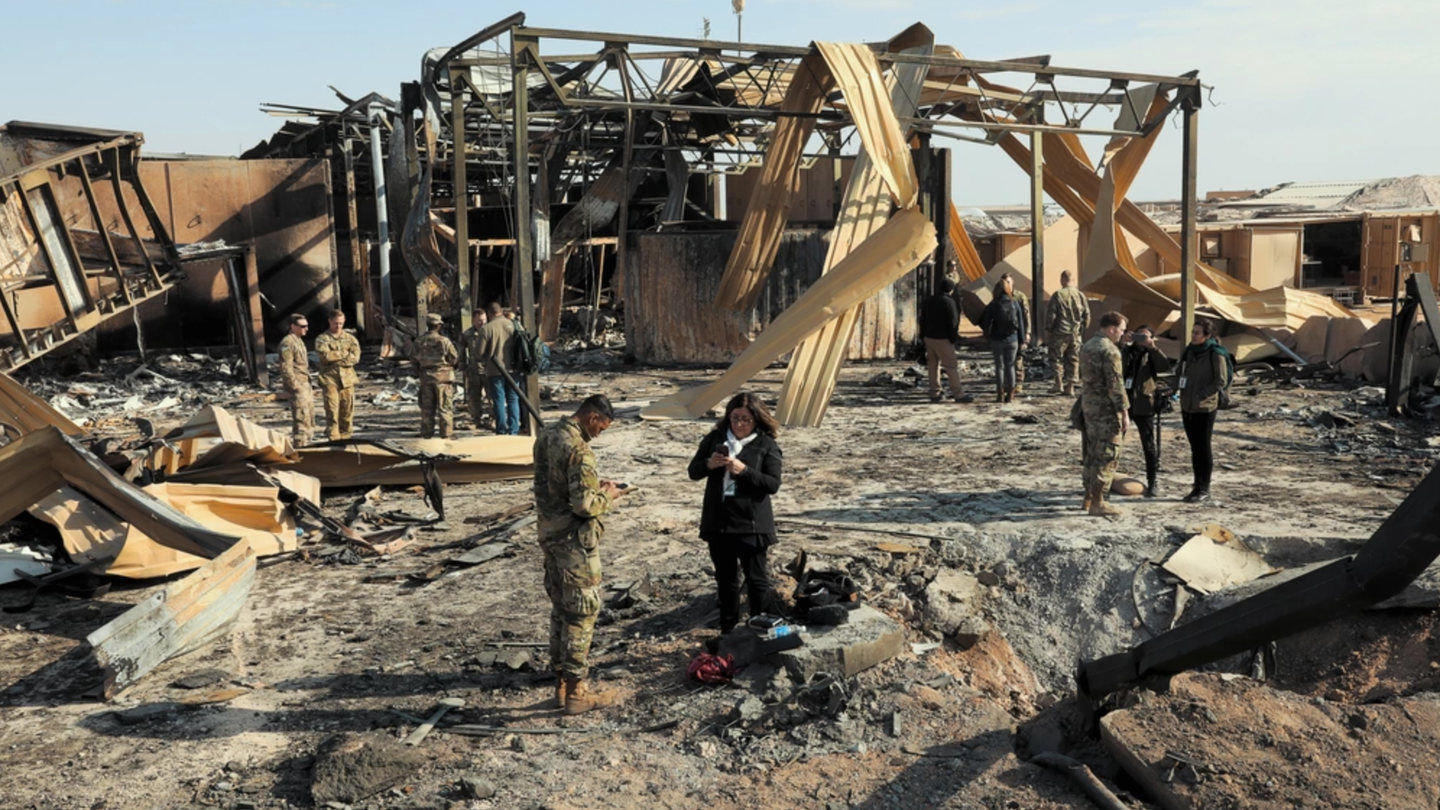 Media outlets visit one of the many impact sites created by the Iranian missile attacks at Al Asad Air Base, Iraq, Jan. 13, 2020. (U.S. Army photo by Spc. Derek Mustard).
SHARE

A group of airmen have been recognized for their extreme heroism aboard a trio of HH-60G Pave Hawks during an Iranian ballistic missile attack against Al Asad Air Base in Iraq in January 2020, the service announced last month.

Distinguished Flying Crosses and Air Medals are awarded to military personnel who “distinguish themselves by single acts of heroism or extraordinary achievement” while in aerial flight, according to the Air Force.

The barrage of more than a dozen missiles resulted in nearly 110 traumatic brain injuries among the nearly 2,000 U.S. forces deployed there. The January 2020 Iranian attack was in retribution for the U.S. assassination of the infamous Iran Revolutionary Guard Corps Quds Force commander Quasem Soleimani the previous month.

According to Air Force officials, the casualty rate from the attack may have been higher had it not been for the quick thinking and decisive actions of Pave Hawk flight lead Madden, pilots Heisler and Tordoff, and special missions aviators Freeman, Hollenbach, Rutledge and Buchalski.

“Our rescue airmen, through very sound leadership, managed to save all of our rescue airmen from two direct impacts on our compound,” said 55th Rescue Squadron commander Lt. Col. Brian Losacker in a December press release. “These men in the aircraft clearly demonstrated notable courage, the type that will be written into history.”

The award citations provided to Task & Purpose confirm their heroism. According to the citations, the airmen — at the time postured as the only available rotary-wing assets capable of assisting with search and rescue — witnessed the first wave of missile strikes on Al Asad before narrowly avoiding the second wave while inbound to assist forces on the ground with casualty and defense support.

Prior to the attack, Madden was tasked as the flight lead for Jolly 46, a formation of Pave Hawks sent to evacuate American civilians at the U.S. embassy in Baghdad. Despite the threat of an imminent attack against Al Asad, Madden and his crew returned to the base within the imminent danger window laid out by the U.S. Space Forces’ Space Based Infrared System early warning system and executed a contingency self-refueling with no ground support as base aircraft fled the strike zone.

According to the award citations, Madden and his fellow airmen had repositioned their Pave Hawks at an austere rally point outside Al Asad when they visually witnessed Iran launching its first barrage of missiles at Al Asad, prompting Madden to order the trio of aircraft to return to the base to provide a much-needed assist.

“Fearing casualties in the face of imminent danger, he courageously launched the three-ship [formation] for Al Asad only to break away narrowly missing the second missile volley blast by less than half a mile,” according to Madden’s DFC citation.

Despite the risk of follow-on attacks, Madden “led the flight back to Al Asad, deployed his pararescue team, executed base security sweeps, and led the aerodrome damage assessment amidst chaotic fires and secondary explosions,” according to his award citation.

“After 13.2 flight hours under exceptionally hazardous conditions and narrowly avoiding certain death, and while heroically committing his crew and team to extreme danger after two missile strikes, [then-Capt.] Madden’s actions helped secure the well-being of his crew, his team, and thousands of Al Asad Air Base personnel following the first theater ballistic missile attack on United States Citizens in over 30 years.”

Madden didn’t do it alone: Capts. Heisler and Tordoff both narrowly avoided the second Iranian missile volley in mid-air thanks to superb airmanship, with Heisler providing “the first airborne medical assistance, battle damage assessments and security sweeps amidst the uncontrolled fires” at Al Asad and Tordoff inserting a pararescue team to search for casualties in the aftermath of the second strike.

None of the pilots left Al Asad until it was absolutely necessary, with Capt. Heisler “communicat[ing] with the Air Operations Center, informing command, and ensuring real-time medical and divert options,” while Tordoff “extended his search efforts by air refueling and ultimately relocated to an undisclosed base to reconstitute rescue alert,” according to their respective citations.

With Madden, Heisler, and Tordoff committing their teams to the search and rescue efforts, Master Sgts. Freeman and Hollenbach and Tech Sgts. Rutledge and Buchalski rose to the challenge of the aftermath of the missile strikes, conducting battle damage assessments, security sweeps, base defense, and the insertion of pararescue, medical, and security teams.

“I am honored and humbled to share the stage with these incredible airmen today,” said Brig. Gen. Sean Choquette, 12th Air Force (Air Forces Southern) vice commander, at the December award ceremony. “Their actions in Iraq … epitomize the finest attributes of each and every one of you in this theater today.”