The military has started "a little more experimentation on the positive side of social media." 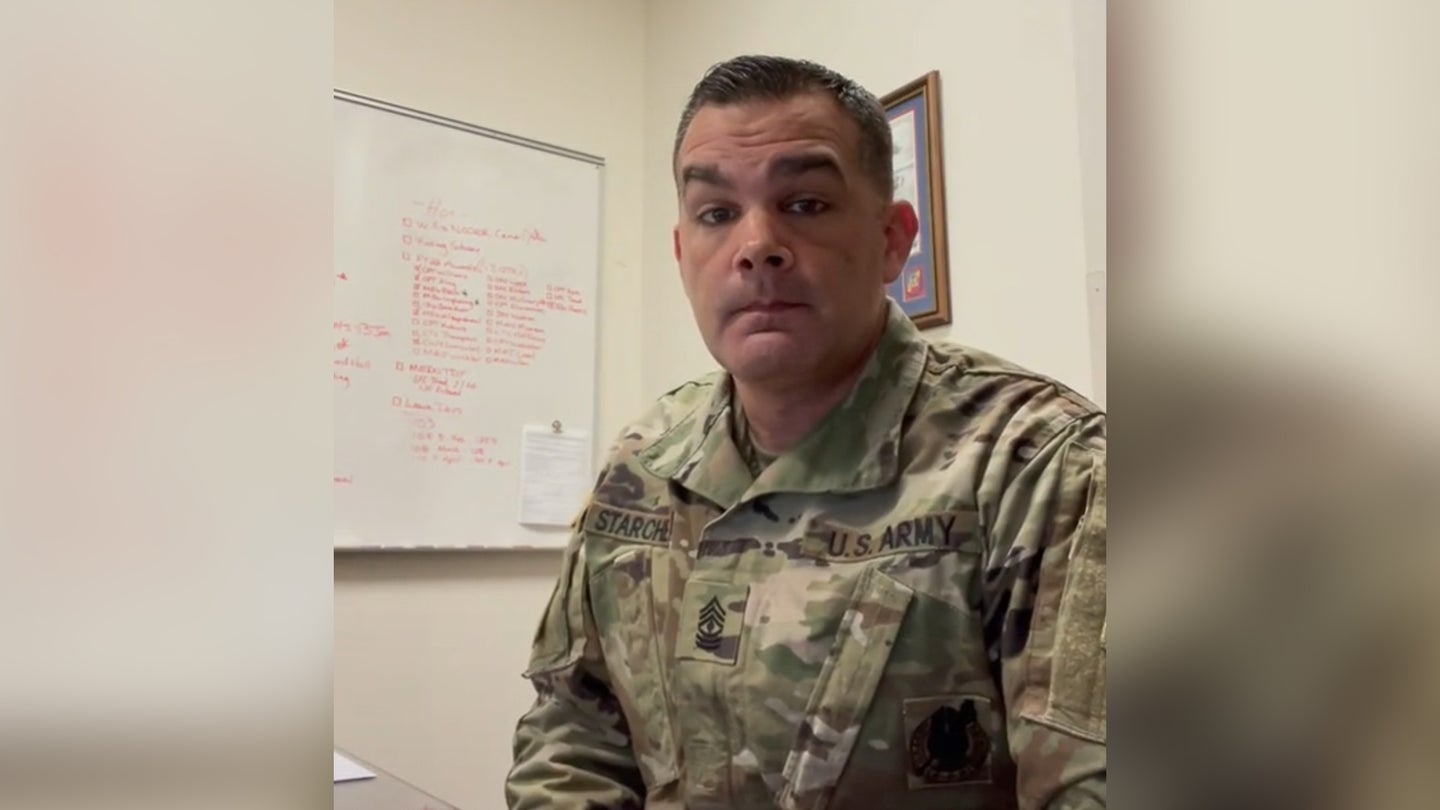 They say there’s a first time for everything, but hailing an Army noncommissioned officer as the “future of Army leadership” for his TikTok videos is still something you probably never expected.

First Sgt. Joseph Starcher films “educational, motivational, and hilarious videos” during his “rare down-time” for social media site TikTok, according to an Army news release from December. It adds that as of December, Starcher “boasted nearly nine thousand followers.” The videos on his account include him showing off his new Army Green Service Uniform — ”Sometimes you have to check your drip,” the video says — as well as videos with leadership tips and jokes about military culture.

According to the release, Starcher was “elected to serve as the TikTok First Sgt.” by other TikTok users in November. The vote was run by another military TikTok account, a sergeant major who goes by the username @infantryguru.

The notable part of this is not that a soldier is posting videos — plenty of them do — but that the Army is going out of its way to highlight a soldier for doing so. It’s even more interesting when considering that there were national security concerns in 2019 over service members using TikTok because of its China ties, and now, soldiers everywhere are posting videos in and out of uniform.

The release also gives a glimpse in how the military is changing its perception of social media. Katherine Kuzminski, the director of the Military, Veterans, and Society Program at the Center for a New American Security (CNAS), pointed out that the military is typically only concerned with social media from a negative standpoint. There is no shortage of social media posts that have cast a negative light on the military — like the Fort Hood soldier who posted a video mocking sexual harassment, or the lieutenant who was given the boot for making Holocaust jokes — which typically draw the most attention.

But over time, there has been “a little more experimentation on the positive side of social media,” Kuzminski said.

“The news stories have always been about punishing people who use social media for nefarious reasons,” she said. “There wasn’t a strategic thought about, how might we use social media to engage?”

Though the military may be dipping its toe into the social media world, that doesn’t mean it always goes smoothly. The generational gap between senior leaders, whose knee-jerk response can usually be summed up with, “don’t post,” and the younger soldiers who grew up in an age where posting everything everywhere, is vast. Part of that was on display in the Army’s mention of Starcher’s follower count. While that has increased to just over 10,000 as of Friday, by TikTok standards that is a drop in the bucket.

Indeed, there have been recent efforts online of the military attempting to reach a younger audience, or trying to “be hip,” as the kids might say. Two instances that stand out are when the Army embraced Zodiac signs on Instagram and, most recently, tweeted an unverified quote from pop star Lana Del Rey.

“I think that from a recruitment perspective, the kids see through it … It’s kind of like when your grandparents tell you, like, ‘We heard about this Facebook thing!’” Kuzminski laughed.

But that doesn’t mean there aren’t ways for the military to use social media to their advantage — especially considering how expensive and time-intensive recruiting campaigns are, compared to posting a tweet or TikTok video.

Kuzminski said she believes the military is successful on social media when it’s used to show things like high-production videos of firing tanks or Howitzers — things that are “fundamentally different from life as a civilian.” There’s also an opportunity for senior leader engagement that could benefit the services. “More organic, approachable nature of interaction with senior leaders, also goes a long way,” Kuzminski said.

As for Starcher, is a TikTok-ing first sergeant the “future of Army leadership?” Perhaps, and he’s not alone among Army leaders on social media, including Gen. Paul Funk, the head of Training and Doctrine Command; Lt. Gen. Ted Martin, commander of the Army Combined Arms Center; Sgt. Maj. of the Army Michael Grinston; and retired Gen. Robert Abrams, who was active even as the commander of U.S. Forces Korea. As the younger generation moves up the ranks, the comfortability with posting on social media will likely change from the more traditional stance leaders have now. But either way, the military is really only at the beginning of its acceptance of social media. It tried to “reject social media for a really long time,” Kuzminski said, and is now starting to see that there’s “something about social media platforms that’s working.”

“I think to a certain degree they’re chasing the use of social media as opposed to setting a policy and then inviting people into it,” she said. “To a certain extent that might actually be more effective … I think it opens the door for future engagement.”