Nancy Pelosi may travel to Taiwan on a military plane, raising concerns about how China might react

China views Taiwan as a renegade province and some have raised concerns that now is not the time for Pelosi to visit. 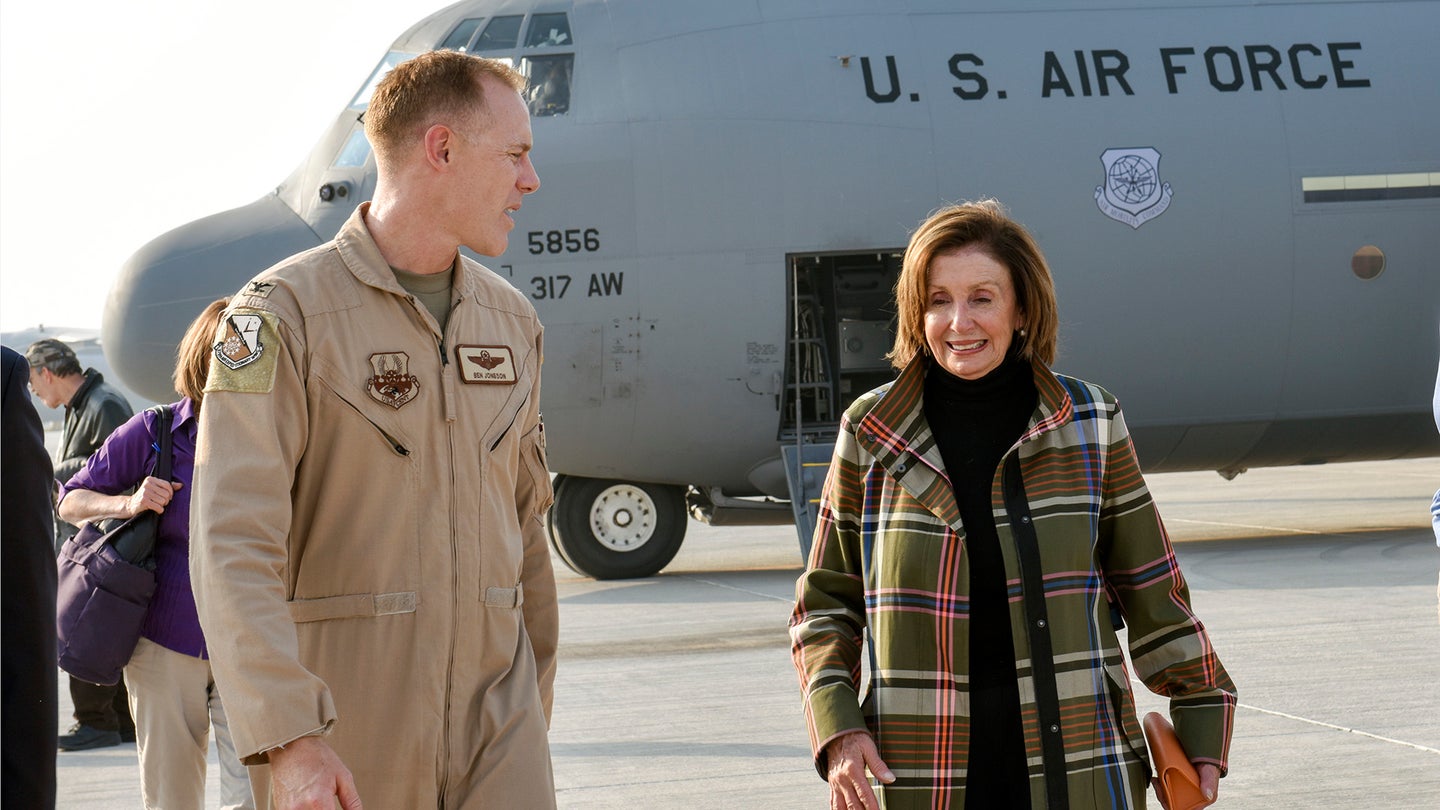 If House Speaker Nancy Pelosi (D-Calif.) visits Taiwan to show support for the island nation, she would likely fly in a U.S. military plane at a time when China is increasingly challenging U.S. aircraft and ships in the Pacific region.

The Financial Times has reported that Pelosi plans to travel to Taiwan in August, but Pelosi has not yet confirmed whether she expects to make such a trip, citing security concerns.

Lawmakers typically fly on military aircraft when they visit Taiwan, which China views as a renegade province, and the Defense Department is considering whether to also move ships and aircraft into the region to protect Pelosi’s delegation if the trip happens, according to the Washington Post.

Army Lt. Col. Martin Meiners, a Pentagon spokesman, declined to say if the U.S. military might fly Pelosi to Taiwan. “It wouldn’t be appropriate to comment on any congressional travel possibilities,” Meiners told Task & Purpose on Monday.

The Air Force’s 89th Airlift Wing transports the president, cabinet members, senior combatant commanders, and other distinguished visitors all over the world. Based out of Joint Base Andrews, Maryland, the wing’s aircraft includes Air Force One as well as military planes based on Gulfstream and Boeing jets.

It is normal for senior members of any administration to use military aircraft during overseas trips because those planes have the communications equipment needed to keep in constant contact with Washington, D.C., and they afford privacy so that officials can work with their staff during long flights to prepare for their visits, a retired senior government official told Task & Purpose. For trips to combat zones and other high-threat areas, it is also common for U.S. government officials to fly in Air Force C-17s because those planes have defensive systems, and their crews are trained to fly in dangerous conditions.

However, President Joe Biden recently said the military has reservations about Pelosi traveling to Taiwan.

“I think that the military thinks it’s not a good idea right now, but I don’t know what the status of it is,” Biden said on July 20 in response to a question from a reporter about whether he thought it was a good idea for Pelosi to visit Taiwan this summer.

Biden did not elaborate on exactly why the military has concerns about Pelosi traveling to Taiwan.

“The administration routinely provides members of Congress with information and context for potential travel, including geopolitical and security considerations,” a spokesperson for the National Security Council told Task & Purpose on Monday. “Members of Congress will make their own decisions.”

If Pelosi arrives in Taiwan, she would be the highest-ranking member of Congress to visit the country since former Speaker Newt Gingrich (R-Ga.) met with Taiwan’s president in April 1997, shortly before China assumed control of Hong Kong, a former British colony.

China has become much more wealthy and powerful in the ensuing 25 years. It is now the second-largest economy in the world, and it also boasts the largest navy of any military. Retired Navy Adm. Phil Davidson, who led U.S. Indo-Pacific Command at the time, warned Congress last year that China could attempt to invade Taiwan by 2027.

The spokeswoman for China’s Foreign Ministry has recently indicated that China could retaliate if Pelosi went to Taiwan. “If the U.S. were to insist on going down the wrong path, China will take resolute and strong measures to safeguard its sovereignty and territorial integrity,” Zhao Lijiang told reporters at a July 19 news briefing.

Zhao did not specify what types of actions the Chinese government might take under such a scenario.

Separately, Army Gen. Mark Milley, chairman of the Joint Chiefs of Staff, has warned that the number of potentially dangerous encounters between Chinese and U.S. ships and aircraft has risen over the past five years.

“The message is the Chinese military, in the air and at sea, have become significantly more and noticeably more aggressive in this particular region,” Milley told reporters on Sunday.

In one such incident, a U.S. special operations C-130 aircraft had an “unsafe” and “unprofessional” encounter with a Chinese SU-30 fighter over the South China Sea in June, Politico first reported.

Washington Examiner online editor Tom Rogan argued in a recent commentary that Pelosi should fly commercially to Taiwan because it is likely that China’s President Xi Jinping would order his fighters to fly close to any U.S. and Taiwanese military aircraft used to get Pelosi safely to the island nation.

“The very threat of this possibility would make it necessary for Pelosi’s aircraft to receive either a U.S. or a Taiwanese fighter escort,” wrote Rogan, who is also the Washington Examiner’s national security writer. “That would only increase Xi’s sense of needing to make a public show of confronting the visit. The risks of escalation and miscalculation would be high.”

Pelosi’s office did not provide a statement for this story.

Respected China expert Bonnie Glaser noted that all members of Congress who visit Taiwan fly on aircraft provided by the military.

Currently, the risk of an incident between China and the United States is growing in the runup to the Aug. 1 anniversary of the People’s Liberation Army’s founding and other events later this year, such as  China’s 20th Party Congress, said Glaser, director of the Asia Program at the German Marshall Fund of the United States.

“The PLA [People’s Liberation Army] would certainly not simply repeat what they did in 1995-96 by firing missiles near Taiwan,” Glaser told Task & Purpose. “It is certainly possible that a PLA aircraft could ‘escort’ Pelosi’s plane and fly directly over Taiwan or at least into the territorial airspace. That would be unprecedented and dangerous. I think it is unlikely that they would shoot down the aircraft.”

UPDATE: This story was updated on July 25 with comments from Bonnie Glaser.