There are few veterans who don’t know the name Hal Moore. The legendary and celebrated military commander, whose battlefield leadership... 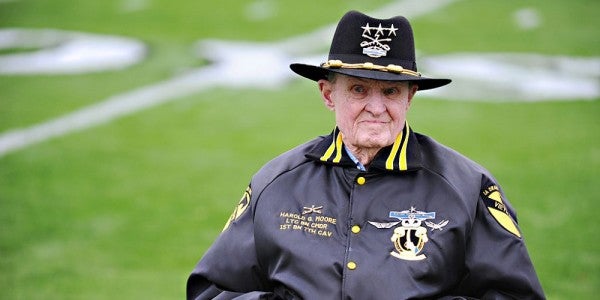 There are few veterans who don’t know the name Hal Moore. The legendary and celebrated military commander, whose battlefield leadership and poise under fire at the battle of Ia Drang was captured in the 2002 film “We Were Soldiers,” passed away on Feb. 10, two days shy of his 95th birthday.

Moore’s family recently announced that his Feb. 17 funeral will be open to the public.

Related: Retired Lt Gen Hal Moore, Depicted In ‘We Were Soldiers,’ Dies At 94 »

“Absolutely no restrictions on attendance and participation,” reads the Feb. 12 public Facebook post. “The ceremony is open to all — everyone is welcome to come and help us honor both Dad and, through his ceremony, all who have served America.”

During the Vietnam War, Moore served as the commander of the 1st Battalion, 7th Cavalry Regiment, and led his unit during the Battle of Ia Drang in 1965, which was the first major engagement between American military forces and the North Vietnamese.

Among the speakers will be Joe Galloway, the famed war reporter who co-wrote the book “We Were Soldiers Once, And Young” with Moore. The book, which was the basis for the 2002 film, painstakingly depicts what happened during that climactic and brutally violent four-day battle in which 234 Americans died.

“There's something missing on this earth now,” Galloway told the Associated Press following Moore’s passing. “We've lost a great warrior, a great soldier, a great human being and my best friend. They don't make them like him anymore.”

Following the memorial service, buses will be available for anyone wishing to attend a brief graveside service at the Fort Benning Post Cemetery around 2 p.m. Afterward, guests can return to the museum for a reception in the grand hall.