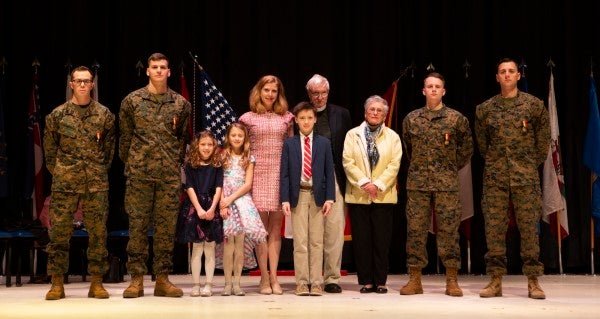 According to a Marine Corps statement, the medal is “awarded to individuals who, while serving in any capacity with the U.S. Navy or the U.S. Marine Corps, distinguish themselves by heroism, including lifesaving and attempted lifesaving acts at the risk of one's own life.”

On June 15, 2018, after they saw that their twin daughters had been grabbed by a strong current, Ali Joy and her husband Charles Austin Joy Jr., raced out to get them before they too were quickly drawn further away from the shore.

Seeing the family was in dire straits, the Marines swam out to get them.

Tragically, after they pulled Charles Austin Joy Jr. to shore, he was unresponsive and despite their efforts he could not be resuscitated, according to the Marine Corps statement.

Since her husband's death, Ali Joy created Float Don't Fight, an organization that aims to educate people on how to survive a rip current.

She and her daughters attended Tuesday's ceremony and met with Reichartwarfel, Larson, McMullen, and Watson.

“It was amazing to see these young men who were on vacation and jumped in,” Ali Joy told 13NewsNow following an Aug. 9, 2019 reunion with three of the Marines. “They have their whole lives ahead of them and they did not think twice about risking their lives.”