Ashley Gilbertson, Bedrooms of the Fallen(University of Chicago Press, 2014) When the ban on media coverage of fallen soldiers returning... 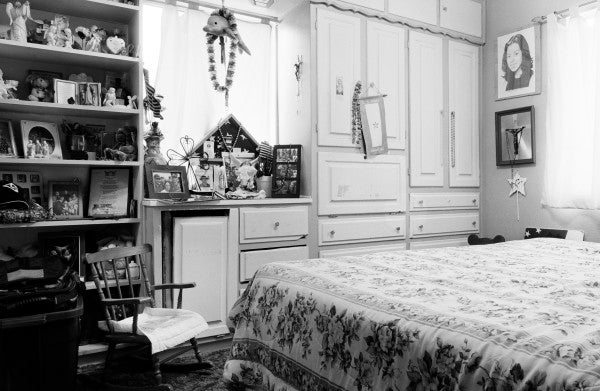 Ashley Gilbertson, Bedrooms of the Fallen(University of Chicago Press, 2014)

When the ban on media coverage of fallen soldiers returning to Dover Air Force Base was lifted in early 2009, the decision — like the ban itself — was greeted with mixed feelings. For some veterans, this new access was just another intrusion into the private moments of being a service member. For some members of the media, a veil of secrecy shrouding the true cost of war was lifted along with the ban.

Eventually, the Department of Defense imposed the caveat that media would be allowed to cover the return of the dead if the families gave permission for their loved ones' remains to be photographed. Some, including myself, wondered if this would truly be treated as an occasion worthy of respect, or if — like many other media projects concerning Iraq and Afghanistan — it would be one more way for the deaths of my fellow service members to serve the needs of the local “television advertisers.” television advertisers.

As a veteran, and one who is well acquainted with the cost of being in the military the past 12 years, it was with some degree of trepidation that I opened “Bedrooms of the Fallen,” a project by photojournalist Ashley Gilbertson, which gets released in hardcover by University of Chicago Press on June 27. The goal of the project is to portray not the presence of the caskets and flags of the fallen, but the absence they leave in the world.

Gilbertson covered the war in Iraq for The New York Times from 2002 to 2008, embedding with different military units as he photographed the conflict. During an embed in 2004, a young Marine escorting Gilbertson was shot and killed in front of him. The project is dedicated in part to him, and this incident serves as an invisible backdrop, infusing the entire book with this first, traumatic absence.

In order to find a way to physically portray the absence left behind by fallen service members, Gilbertson decided to photograph the bedrooms of those killed in Iraq and Afghanistan. He journeyed throughout America, and across borders to Canada, France, Italy, Germany, the United Kingdom and the Netherlands to capture a series of wide-angle, black-and-white studies of interrupted lives and lingering grief.

Gilbertson took care to ensure that rooms he photographed hadn't been changed since the death of their former occupants, although some small changes had often been made. Each photograph is presented as a double-page spread with a short paragraph identifying the former owner, his or her date, method and place of death, hometown and when the room was photographed.

As the 40 empty spaces slip by, the book becomes an invitation to an uncomfortable voyeurism. On the one hand, these photos are available for our examination and reflection; on the other, they feed a somewhat ghoulish curiosity. In making tangible the absence of these fallen soldiers, sailors, airmen and Marines, the project provides for the audience's indiscriminating inspection the myriad details of a life out of context.

In portraying the individual absences, the photographs present small details that begin to stand out upon protracted observation; however, the format of the photos, and their similarity in frame and composition, craft what becomes a generic experience. They start to blend together and the series becomes less a specific collection of absence, and more a collective, overwhelming lack of presence.

A project such as this contains a certain intrinsic homogeneity. The majority of the photographs are from young service members of what appears to be middle class backgrounds. Their families have not had another sibling who needed the space, nor have the service members completely moved from the house in which their post-adolescent presence lingers. There is a significant lack of older adults present in these pages.

The question that comes to mind concerns how accurately these bedrooms show the everyday details of a sudden disappearance. For most military personnel, one leaves this childhood room at home when he or she joins the service and embarks on a life lived in a series of other, temporary spaces, that become no less home. These bedrooms may portray the biggest absence left by the fallen, but it's not the only one.

By venturing outside the borders of the United States, Gilbertson provides a unique perspective in his portraits that are not conveyed in the photographs. For example, the sister of a German soldier who died in Afghanistan says she is uncomfortable sharing information about her memorial tattoo because of the general negative outlook on the military. A mother of a French soldier shares the story of her journey to Afghanistan, to the forward operating base her son had been stationed at, a journey mostly unavailable to families of American fallen soldiers.

The photographs and ideas in this book comprise a unique contribution to the growing body of recent war literature and photography. Gilbertson's project is intended to make the absence felt for an audience that no longer sees the coverage of the fallen on the nightly news. Yet, the jaded veteran in me wonders, will such an audience even open this book? Or will its value be in the record it provides to these families of the fallen and their fellow service members who already understand the message displayed in its pages, searching the photographs for the echoes of the ones they've lost.