How the Navy trains sailors aboard its oldest ship 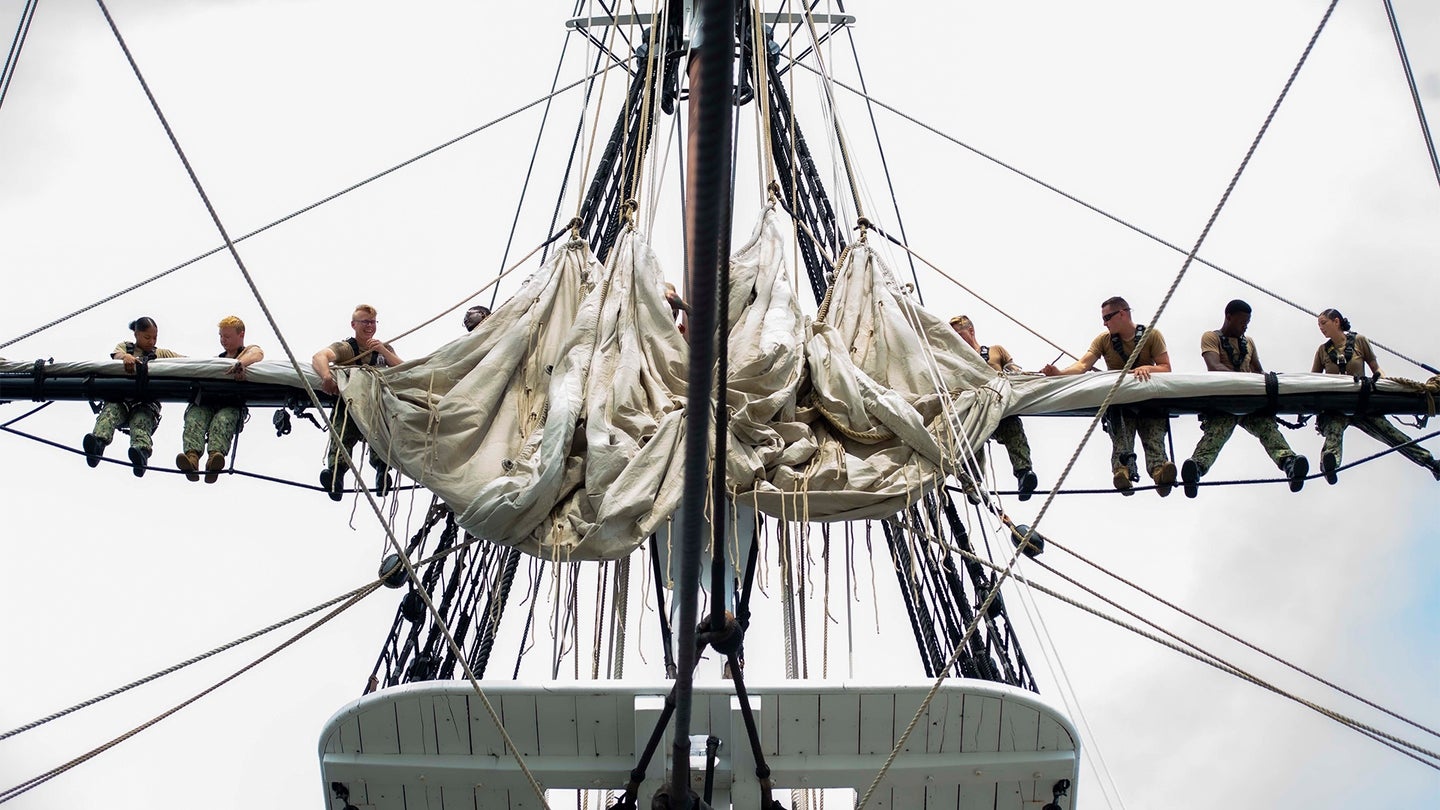 Train how you fight. And, if you’re stationed aboard the oldest commissioned Navy vessel, that means occasionally climbing into the topsails for a little Master and Commander-style training.

Earlier this month, sailors aboard the USS Constitution conducted a climbing evolution, heading up into the rigging and sails of a ship that was commissioned all the way back in the 18th century. It’s certainly not a job for someone who is afraid of heights.

Serving aboard the USS Constitution is considered a special duty, as most of the job is interacting with visitors each day. But it also means, unsurprisingly, that the sailors have to know a bit about sailing.

“I ask my sailors to be an 1812 sailor some days, but I also have to make sure they’re a 2022 sailor and ready to go do the mission the Navy asked of them,” the ship’s commanding officer, Cmdr. Billie Farrell said in a Navy press release earlier this year.

Climbing into the rigging is a chance for the sailors to practice handling lines and sails and operating a ship that is almost as old as the United States itself.

“I’m among one of the very few sailors in the United States Navy that will be a true square rig sailor,” said a member of the ship’s crew in 2019. “And that comes with traits such as knowing how to line handle and set a square sail and how to climb the shrouds and furl a sail.”

When the ship left the harbor in 1997, the crew at the time had to learn many of the tasks that would have been essential to their counterparts 200 years earlier

Moored in Boston, the USS Constitution is a relic from the age of sail, and serves as a museum ship, open to the public. It doesn’t sail much these days, but given its long history, it’s currently the only Navy ship afloat that has sunk an enemy vessel.

First commissioned in 1797, the USS Constitution was one of the Navy’s original six frigates. In the ship’s earlier years, it was one of the fastest and most formidable ships on the high seas. During an engagement with the HMS Guerriere in the War of 1812, British cannonballs were supposedly bouncing off the ship’s 22-inch thick hull, earning it the nickname of “Old Ironsides.”

Today, at Naval Support Activity Crane, near Bloomington, Indiana, the Navy still maintains a forest of white oak trees, just like those used in the original construction of the ship, in order to maintain and refurbish its hull.

The USS Constitution continued on in active service until the middle of the 19th century when advances in technology made it obsolete. The ship was later used to train Naval Academy midshipmen, but its notoriety saved it from the scrapyards. The ship spent decades in Boston Harbor as a floating barracks, being periodically decommissioned and recommissioned. In the 1920s, the ship was once again restored to seaworthy condition.

In 1997, to commemorate the ship’s bicentennial, the ship actually sailed on its own for the first time in more than 100 years.

And today, it continues as both a museum and an active duty Navy ship, complete with a crew of sailors on special duty. It also hosts annual Chief Petty Officer Heritage Weeks, where newly selected chief petty officers get a chance to practice some older nautical skills, like handling lines and sails, or a 24-pound naval long gun.

The opportunity to climb into the rigging like a Napoleonic War-era sailor? Sounds better than serving on a Littoral Combat Ship, which the USS Constitution will almost certainly outlast.