That's a lot of 'brrrrt' 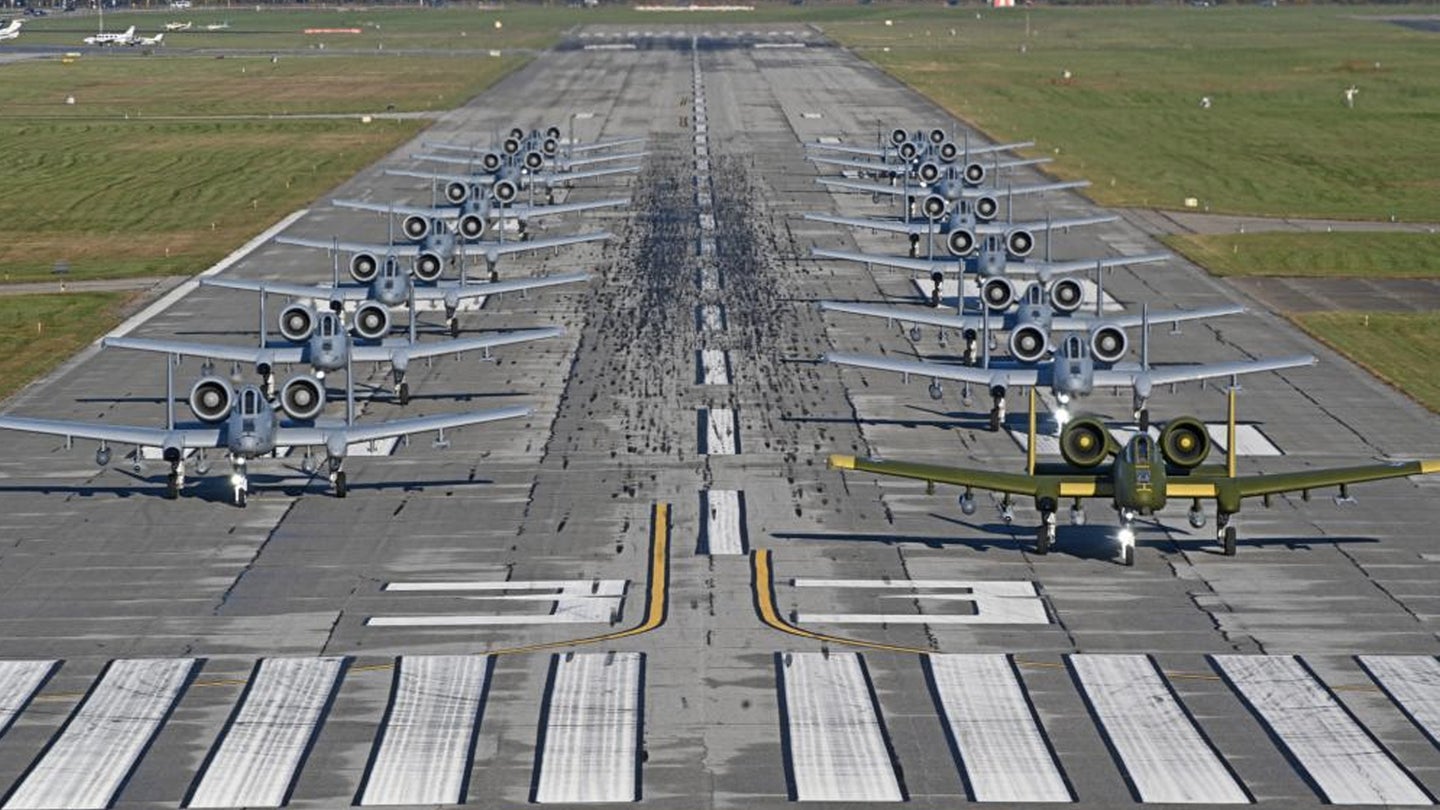 If you ever wondered what the road to close air support greatness looks like, look no further than Warfield Air National Guard Base, Maryland, where the 16 A-10C Thunderbolt II attack planes of the 104th Fighter Squadron lined up down the runway on Wednesday for an ‘elephant walk,’ where aircraft line up in formation on the airstrip.

The ‘elephant walk’ tradition dates back to large numbers of World War II bombers taking off to attack targets in Europe, but the 104th used the maneuver as a chance to showcase “the capability of pilots, airfield operations and maintainers of the 175th Wing,” according to a news release.

Specifically, the elephant walk was meant to demonstrate the Maryland Air National Guard’s ability to launch combat-ready A-10s at a moment’s notice, though the news release did not say how much time it took to put the walk on.

“Our ability to generate combat airpower at a moment’s notice helps promote regional stability because we can immediately respond to any threat,” said Brig. Gen. Paul Johnson, commander of the 175th Wing. “The 175th Wing is always ready to answer our nation’s call and defend our country from our adversaries.”

Affectionately known as the ‘Warthog,’ the A-10 has a legendary history of breaking enemy tanks and saving friendly ground troops from certain death. Just one or two Warthogs have been sufficient to save the day in past battles, so it’s difficult to fathom the amount of whoop-ass on display on that runway in Maryland on Wednesday. But we’ll do our best to break down some numbers below:

The maximum takeoff weight for an A-10 is 51,000 pounds, so even if the A-10s are completely empty of ammunition in this photo, you get a sense for how scary they would look kitted out in full battle rattle. In fact, that was part of the goal of the photoshoot.

“Seeing our entire fleet on the runway, it’s just an awesome display of combat power,” said Col. Richard Hunt, vice commander of the 175th Wing. “Our maintainers are some of the best in the Air Force, and this is concrete proof of our ability to bring the full force of our airpower to bear whenever it is needed.”

The walk was also meant to prepare airmen “for surges in operations when large numbers of aircraft and personnel are mobilized for a mission,” according to the news release. The A-10s formed a half-mile long line before getting into formation. Though the news release did not state whether the aircraft then proceeded to launch into the wild blue yonder, we can only hope that the skies were torn asunder with the sound of ‘Hogs in flight.

“Generating this many A-10s is testament to all the teamwork that it takes to keep us operationally ready,” said Col. David Wright, commander of the 175th Maintenance Group. “As proud as I am of the job our Airmen did, I can’t say I’m surprised by it. Combat readiness is what we do, and our people always rise to the occasion.”

While most of the A-10s in this photo sport a standard grey paint job, eagle-eyed readers might notice a unique paint scheme on the lead aircraft. The green and yellow paint honors the 100-year anniversary of the Maryland Air National Guard and pays tribute to the original bright colors of 1920s aircraft, according to a news release. The unit started as the 104th Observation Squadron, which was formed on June 29, 1921.

If anything, the photo proves that “brrt,” the sound the A-10’s cannon makes when it opens fire, looks good in any color, and the more the brrt-ier.