That’s a lot of turkey. 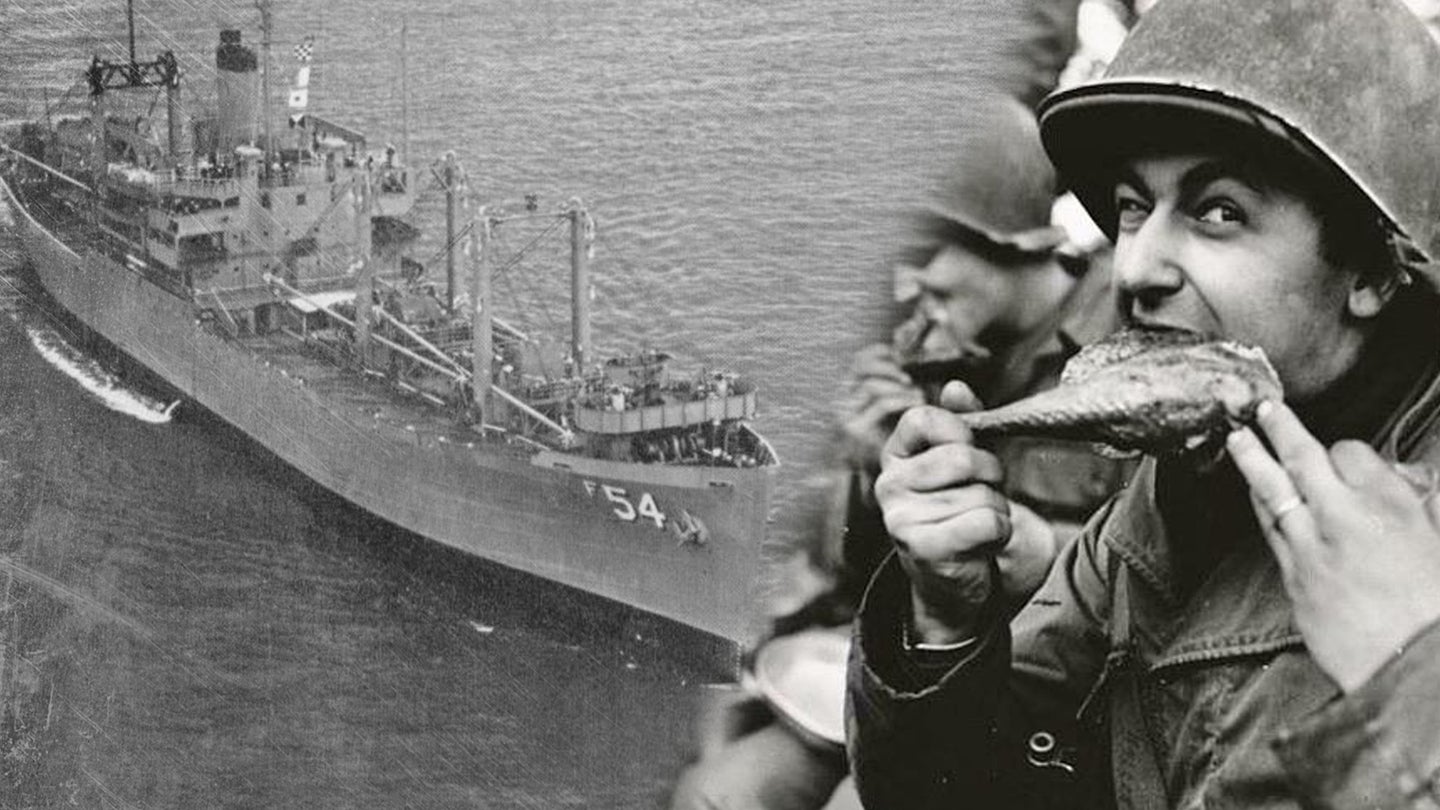 In October 1944 a ship departed from New York City, bound for France, with important cargo. At the time, hundreds of ships were crossing the Atlantic Ocean ferrying supplies to the war effort in the European and Mediterranean theaters. This one, though, wasn’t carrying arms, ammunition, or armor. The SS Great Republic was carrying all the turkey that was supposed to be served to U.S. troops in France for Thanksgiving that year.

By the fall of 1944, U.S. troops were on the offensive in Europe, but supplies were always running low. Because there were no open harbors outside of France, everything had to be shipped to the front lines from ports like Cherbourg, hundreds of miles away. Thousands of troops, many of them Black soldiers, were driving more than 6,000 trucks around the clock to keep the front lines supplied, and that included bringing something to eat other than C-rations.

“The disadvantages and even dangers of a monotonous and unpalatable diet under combat conditions were widely underestimated within the Army,” the Army wrote in The Quartermaster Corps: Operations in the War Against Germany, published in 1991.

Nevertheless, the decision was made that all American soldiers in the European Theater of Operations were going to get something resembling a traditional Thanksgiving meal. Doing so wouldn’t be easy, because coordinating the supply chain for more than 1 million soldiers was a byzantine process. The Quartermaster Corps had to know, in theory, what was in every ship arriving in port and unload it based on priority. Trucks and rail cars — managed by the Transportation Corps — had to be staged accordingly. And meat, of course, required reefer, or refrigerated, transportation and had to be inspected by veterinarians from the Medical Corps. If a ship couldn’t unload on time or a convoy of trucks or rail cars was delayed there was, of course, spoilage — at one point in the summer of 1944 a quarter of the oranges shipped to France were rotten when they arrived in port. Then atop the time constraints, there were  Army regulations, like reefer transports needing to be inspected if they ever went over schedule in their deliveries, and you know that it takes a lot of work to keep the soldiers supplied in a timely manner.

One day that summer, the port of Le Havre came to a complete halt because the Quartermaster Corps hadn’t coordinated with the Transportation Corps to have any trains available that day to, you know, transport everything. If Power Point existed in 1944, it’s safe to say this would have generated plenty of slides for the next staff meeting.

Still, the Army was going to get that turkey to the front lines, one way or another.

“The general opinion was that, irrespective of the morale value of a holiday meal, failure to meet a widely publicized commitment would have a very unfavorable effect,” wrote the Army.

The Army estimated that a traditional Thanksgiving dinner would be one and a half pounds and equal to three other meals. Turkey, being a bird, was much bulkier to ship than beef or pork, requiring four and a half times the storage space.

The SS Great Republic was a reefer ship, built to carry refrigerated goods. And for this voyage across the Atlantic Ocean it was loaded with 1,604 tons of turkey, enough for every American soldier in Europe. One ship, more than one million Thanksgiving dinners. Thankfully for the crew, the birds had already been butchered.

While turkey was among the few things not rationed during the war, the number of turkeys going overseas did create a shortage in the United States. A New York Daily News article from Nov. 22, 1944 recounts a police raid on a black market turkey selling operation in Brooklyn. (If your grandparents had a police record for trying to buy a black market turkey for Thanksgiving, props to them.)

The SS Great Republic arrived in France on Nov. 18, along with the accompanying apples, oranges, fresh eggs, onions and cabbage. A fleet of trucks was assembled to transport the food to the front lines. And while some troops didn’t receive their Thanksgiving rations until a day or two after the holiday, more than 1.6 million pounds of turkey did make its way to just about every soldier in Europe.

The SS Great Republic wasn’t done supplying American troops. The ship would be commissioned in 1950 as the USS Pictor, according to NavSource, a volunteer-run U.S. naval history site. The USS Pictor spent the next 19 years delivering provisions to troops around the world before being decommissioned in 1969.

The war, of course, continued on during that Thanksgiving, but thanks to one ship, a little taste of home was brought to the front lines.