The Dodge Challenger and Charger are dead. Here are the best rides to blow your paycheck on instead

Plus, some tips to avoid getting taken for a ride by that shady salesman slinging 20% APR. 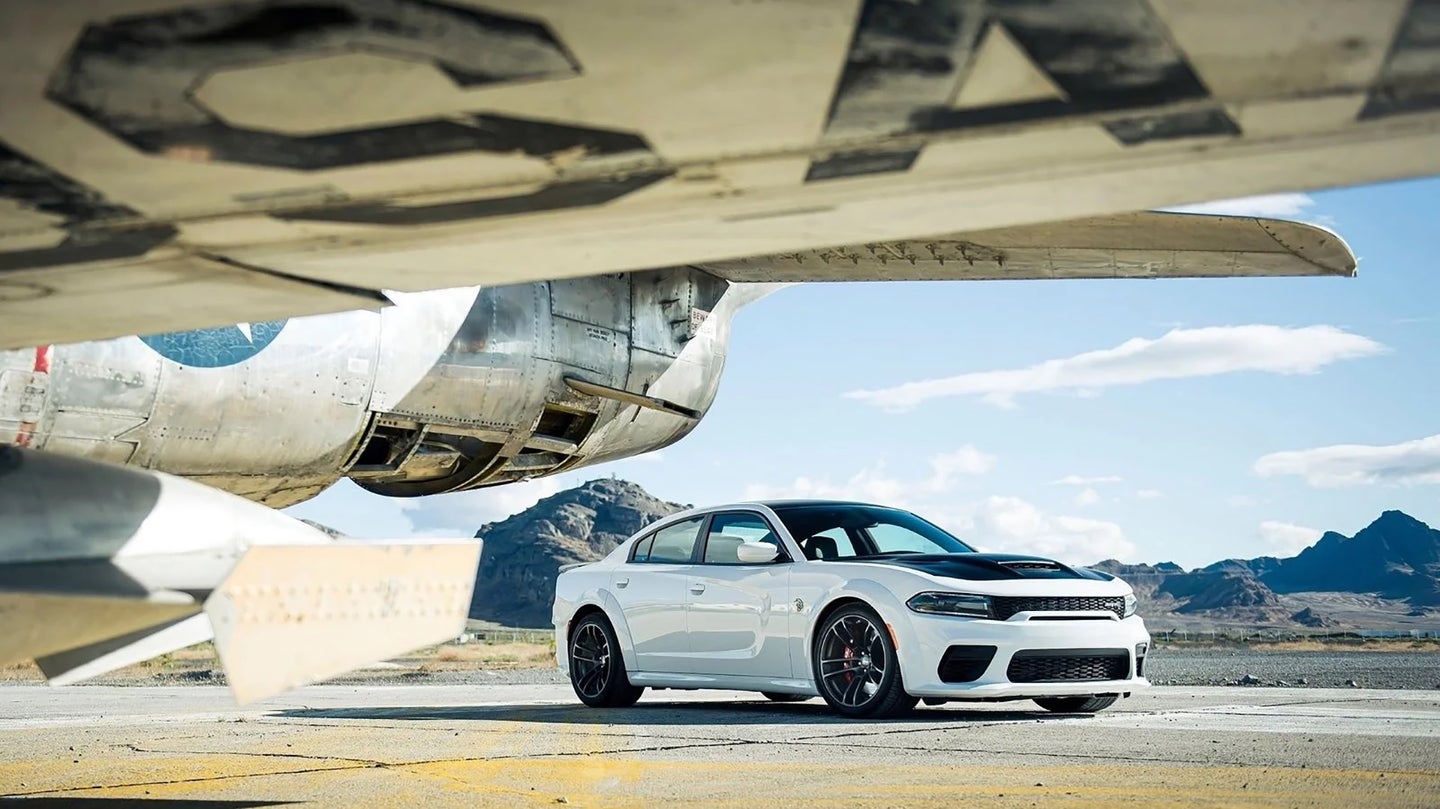 Much to the chagrin of junior officers and enlisted troops everywhere, the Dodge Challenger and Charger are driving off into the sunset soon. These two were unique in that they didn’t pretend to be anything else but American muscle cars that looked mean and went fast in a straight line. Both were very popular with military folks and will be sorely missed. However, it doesn’t have to be “Mopar or no car” if you wear a uniform because there are plenty of badass rides that are worth blowing your hard-earned pay on.

But first, let’s dive into why the Challenger and Charger have been on-post staples for so long, and why they can represent some serious pitfalls in the car-buying process. Besides the fact that plenty of people love American muscle and the chance to go fast, these cars have long attracted a certain kind of military car buyer.

First and foremost, the Charger and Challenger are relatively affordable for the performance you get. Let’s put aside the menacing muscle-car looks, although that’s certainly part of the appeal; the V8 versions of both cars start right around $40,000 brand new. They can go way up from there to the SRT (Street and Racing Technology) models in the $80,000 range, but even the more affordable V8 models offer the kind of old-school grunt that few modern cars can match. Plus, both have been on the market since the 2000s now; used models are in ready supply for the most part.

But even if these Dodge muscle cars bring incredible performance bang for the buck — and they do — they can still lead young service members to make poor financial decisions.

The bulk of junior enlisted service members are young, from 18, 19, to their very early 20s. As such, the military is the first time in many of their lives that they have any kind of disposable income, albeit not much. The reason they go broke on expensive cars and trucks (lifted pickup trucks are also really popular) varies from person to person, but generally, they’re for the same reasons anyone else splurges on that stuff: Culture, status symbols, they look cool, they like to drive fast, and at least some young folks probably hope it’ll help them get laid. (Evidence supporting this remains highly inconclusive.) And for some junior service members, this is likely the first big ticket item that they ever could buy.

Junior enlisted troops don’t make much. In the case of E-3s and below, they generally make around $2,300 a month, but they usually live in the barracks, so many don’t pay for housing (don’t let that fool you; barracks life can be really shitty.)  They eat at the chow hall, so meals are provided three times a day, though there are plenty of complaints about the food quality.. Other than that, their biggest recurring bills are cell phone plans, internet, booze, and… car payments.

Enter: The shady offbase car salesman. Just about every single military base seems to have a strip of the same five establishments right outside the main gate: Pawn shops, tattoo parlors, strip clubs, bars, and car dealerships. Car dealerships near military bases have a reputation for being more predatory than usual, perhaps because they’re well aware of the salaries of the troops who come by and know that they cannot possibly afford some of these cars, yet insist on selling them anyway, usually at absurdly high interest rates. This is such a problem that some state legislators have even proposed laws that would carve out a grace period for troops who got duped so they can return their cars after a month if they want.

The end result is a stereotype that many military- and military-adjacent folks know all too well: the 20-something junior enlisted service member with a 20% APR loan for something that will slay their bank accounts as well as it slays tires.

But if you’re a young military buyer with Challenger envy, this doesn’t have to be your life. There are some key strategies you should know to minimize losses to your bank account.

First, do an honest assessment of your budget and what you can really, truly and comfortably afford. There are online calculators that allow you to plug in monthly and down payments and set your total spending limit. Remember, sometimes it’s best to get a cheaper car now so you have some long-term savings for other major purchases. It always helps to know your credit score before you buy as well, so you can avoid surprises in the finance office and know exactly what kind of deal you can get.

Second, get pre-approved for a car loan so you can use that APR as leverage against the dealership. Credit unions like USAA and Navy Federal offer great rates and are easy to work with.

Third, don’t limit yourself to the dealership near your base. By casting a wider net you are more likely to find a more competitive deal. Car-buying right now is extremely tricky due to the supply chain crisis, so it’s even more important now to take your time, do your research and find the right deal.

Fourth, be patient and be open to putting in a factory order. This lets you customize your new car exactly the way you want, in exchange for some extra wait time. I know you want to show off your new ride to your squad, but in this market, the dealers that have cars available now usually have big markups. The dealers that are willing to sell at sticker price without the market premiums typically will offer a factory order that can take a few months.

Now, onto your best choices for a post-Challenger and Charger world.

Chevrolet Camaro and Ford Mustang — Dodge’s crosstown rivals will continue offering their muscle coupes for now, and while it might be a tough pill to swallow to switch from a Chally to a ‘Stang or Camaro, both models are worth considering. The Chevy wins the value score between the two with the turbo-four base model starting at mid-level Civic pricing and a V8 six-speed manual model setting you back around $36,000. The current Mustang is more athletic than it’s ever been, offers iconic performance in its own right, has plenty of model choices, and is easier to see out of than Chevy’s muscle car.

Ford F-150, Ram 1500, Chevy Silverado. The Dodge Charger offered V8 power, four doors, and a generous trunk. No other automaker sells a new sedan that offers the same, but you can have eight cylinders under the hood and your choice of rear-drive or 4×4 with any of the domestic pickups. You get all the benefits of a muscle-sedan plus the added bonus of loading the bed with whatever you need for your next project. Of course, you don’t have to opt for the V8 as modern trucks are offering hybrid and even fully electric options. Modern muscle cars are basically trucks now. Get over it.

Jeep Wrangler. How can I make a list of military-style civilian cars without mentioning Jeep? The Wrangler is a timeless design and offers a huge variety of configurations, colors, and powertrains. From a base-spec two-door starting at about $30,000 to the Hemi-powered 392 Rubicon and even the all-new 4xe Plug-in Hybrid, if you need to save on gas. There is a Wrangler for almost every personality.

Toyota 4Runner. Yes, it has a V6 under the hood that is even thirstier than the V8s from Dodge but the 4Runner embodies the same characteristics as our troops — it’s tough and durable. Like the Challenger and Charger, the 4Runner hasn’t changed all that much in the past 10 years. But while some consider it dated, others love its “old-school” charm. After all, if it ain’t broke, don’t fix it. The secret to the 4Runner is you don’t need the rare and expensive TRD Pro — which starts at $53,270 — to complete your mission when even the lower trims will get the job done. Though used examples abound because the current 4Runner has been around forever, they do tend to hold their value extremely well.

Ford Bronco. With its removable doors and multi-roof options, the Bronco splits the difference between the Wrangler and the 4Runner using a modern retro aesthetic. If like to keep things basic, the Bronco starts at a very reasonable $33,000 for a two-door and a soft-top, but go crazy with the options and you can hit the $50,000 mark for a spec’d out off-roader or close to $70,000 if you want your Bronco with Raptor power. Also, check out the Bronco Sport crossover if you want something with rugged SUV looks but a little more livability.

Subaru BRZ, Toyota 86. Having big power is great, but ask a fighter pilot and they’ll tell you maneuverability wins dogfights too. So if clipping apexes and carving canyons is your thing and you don’t want to break the bank the mechanical twins of the Subaru BRZ and Toyota 86 offer Porsche-like handling but at a sub $30,000 price point. Fun fact: they’re pretty much entirely the same car, so buy whichever one you can get the best deal on.

Nissan Z, Toyota Supra. Unlike the BRZ/86 the Nissan Z and Toyota Supra don’t share any parts. But both are classic sports cars from Japanese brands (although the Supra is now a BMW underneath, not that that’s a bad thing) both share similar approaches to performance with turbo-charged six-cylinder engines, available manual gearboxes, and most importantly, rear-wheel-drive.

The Z and Supra deviate when it comes to pricing. The Nissan will set you back just over $40,000 for V6 power and a proper manual gearbox, whereas the Supra is over $50,000 for the BMW-sourced straight-six. The Supra also offers a less powerful turbo four option for around $10,000 less, and it’s a surprisingly decent performer, but it can only be had with the automatic gearbox.

Any of these options should tide you over until the new Challenger and Charger arrive with conventional and all-electric power. Just make sure you buy smart so you don’t make an investment you regret later in life — and have cash on hand to cover your trips to traffic court.