“I would just say, I got your back. And I think every NCO in here needs to say the exact same thing.” 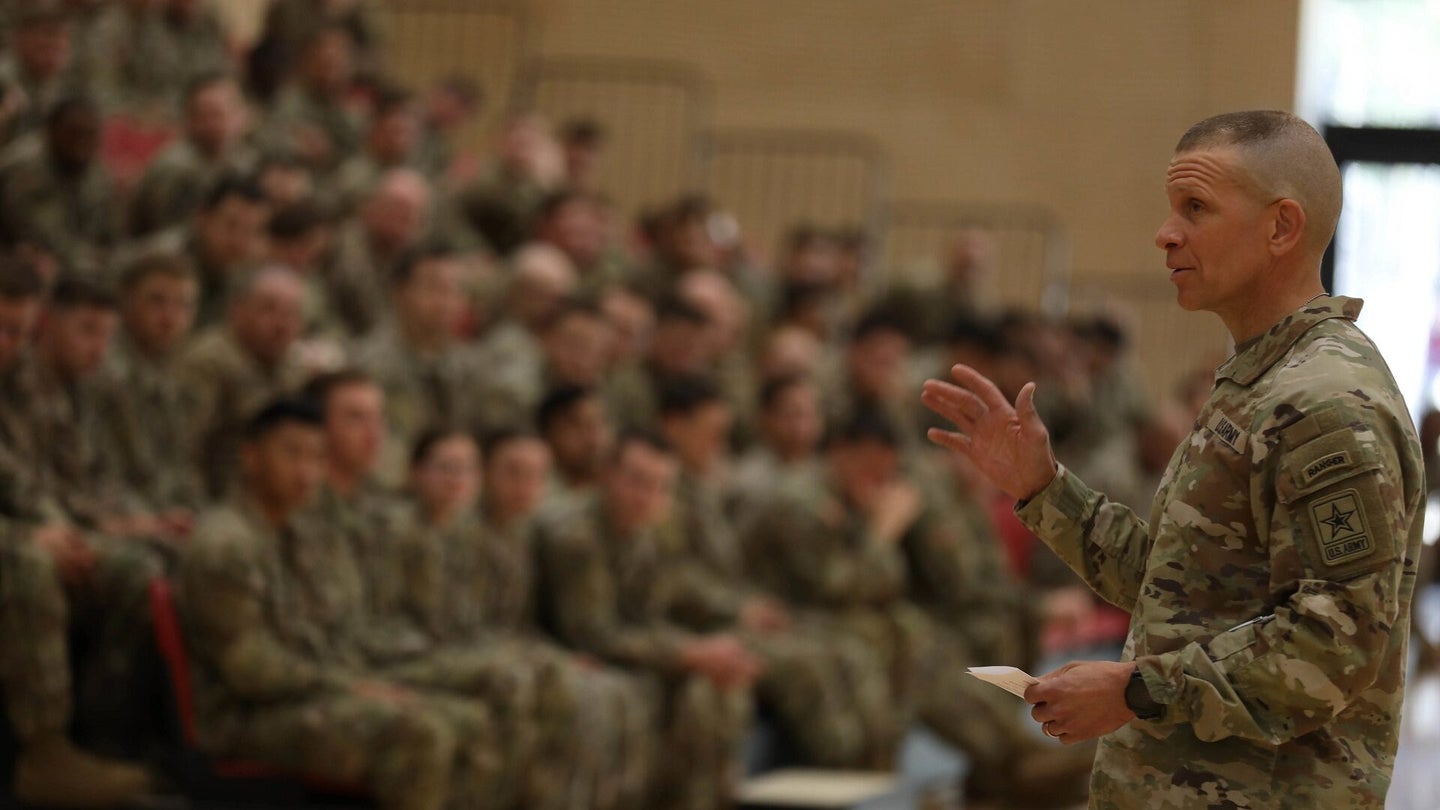 In a Q&A with noncommissioned officers on Wednesday, Sgt. Maj. of the Army Michael Grinston gave clear direction that leaders should be sticking up for their soldiers, both online and in real life.

At the Association of the U.S. Army annual conference on Wednesday, Grinston was asked a question about leadership online by an audience member and pointed back to Army command policy which says leaders should “do what is right to prevent abusive treatment of others,” and that “[f]ailure to do so brings discredit on the Army.”

“It talks about how as a leader you are expected to intervene on behalf of your soldiers,” Grinston told the room at AUSA on Wednesday. “And then it says in parentheses, online and in person … I think we’ve got to do that. You’ve got to do it professionally, you’ve got to do it the right way”

The conversation about how leaders should engage on social media was ignited last week following Task & Purpose’s report on the Inspector General investigation of Maj. Gen. Patrick Donahoe, the former Maneuver Center of Excellence commander at Fort Benning, Georgia. The substantiated allegation against Donahoe said that he failed to display Army values and core leader competencies, and violated a Training and Doctrine Command policy that prohibits training cadre from having personal relationships with students. The latter piece of that violation centered on Donahoe’s public tweets to junior officers.

But the IG report also mentioned tweets from Donahoe in defense of female service members after they were criticized by Fox News host Tucker Carlson. His tweets “drew unwanted negative attention to the Army,” the report said, and “exhibited poor judgment.” The rebuke of Donahoe’s comments subsequently raised questions for some soldiers about what is and is not appropriate in confronting unfair criticisms of their troops online.

And while Grinston did not directly address the report or discourse surrounding Donahoe’s investigation, he did make clear that leaders should be sticking up for their soldiers.

Read the entirety of Grinston’s response, which has been edited for clarity:

Question from attendee: I know the first day of the conference, there was a lot of discussion about social media and leaders online, but in the last few years, I’ve watched your office empower your staff to be online to get your message out, to get messages from the force. And we’ve worked with them to intervene in suicide prevention efforts, we’ve intervened in sexual harassment efforts and made those reportings to the command. So I feel like it’s been really important the last couple of years, the standard that we set the example that made, we have more soldiers here because of it. So how do we take this example and replicate it for leaders across the force?

Grinston: Thank you, that’s a good question. I would just say, I got your back. And I think every NCO in here needs to say the exact same thing. And it doesn’t matter whether I’m on social media, if I’m intervening with a suicide — and those have been fantastic, and we do we have to do better — but it also means in person. It doesn’t matter. And believe it or not, when you look this up in the Army Command policy, it tells us to do that. Read it. I already looked it up, paragraph 4-19. It says as a leader, we expect — this is written in the Army Command policy, and if you haven’t read it, please do on paragraph 4-19 — and it talks about, as a leader you’re expected to intervene on behalf of your soldiers. And then it says in parentheses online and in-person. It’s our policy.

But that’s what I think we’ve got to do. You’ve got to do it professionally, you’ve got to do it the right way. I think that’s one of my own lessons, sometimes I do it right sometimes I do it not right. But we would never hesitate to intervene on behalf of our soldiers, hopefully, in person. Right? I mean — this is a true story, I won’t tell you where it was. I was somewhere with one of my soldiers and one of my soldiers does not drink alcohol. And somebody offered him something to drink, and you know, somebody said, ‘Well, you know, you couldn’t be in my Army.’ That’s what he said to the soldier. So I said, ‘Okay, that’s good, because I want him in mine.’ I’m gonna stick up for my soldiers, I don’t care where it is, that’s how I feel. And that is me. I mean, that’s what you get. And that’s what we want you to do every day, no matter where you’re at, or what venue you’re at. Right NCOs? And we got to remember that we build that trust. We’ve got to be willing to do that. More importantly than online, you have to do it in person. That’s what I would say to you. The bottom line, we are people and we have to talk to each other. And I get really worried when you say ‘well, this thing is going on over here.’ You know, but this thing over here should not override the trust you have in your squad and your unit. I had this conversation with Sgt. Reinier, a very heated conversation. I’m looking at it like Sgt. Reinier, no matter what is said online, no matter what, what did I say to you yesterday?

Grinston: I did. And I said all these things are going to happen, are going to be said, but I want you to know, you’re in my squad and I would die for you. I said, ‘Do you believe me?’ He said, ‘Yes.’ That’s what trust is to me. It’s not on the internet, it’s not somebody saying stuff bad about you. Would you die for that squad leader? … Sometimes I think we need to close all that stuff off, we need to intervene and I’m not going to stop doing that no matter what the venue is, but more importantly when you go back to your squad, do you have the same trust in your squad.