The Sergeant Major of the Army turned to Reddit to ask soldiers for their help fixing issues with Army culture. One suggestion: "Cut back on the bullshit." 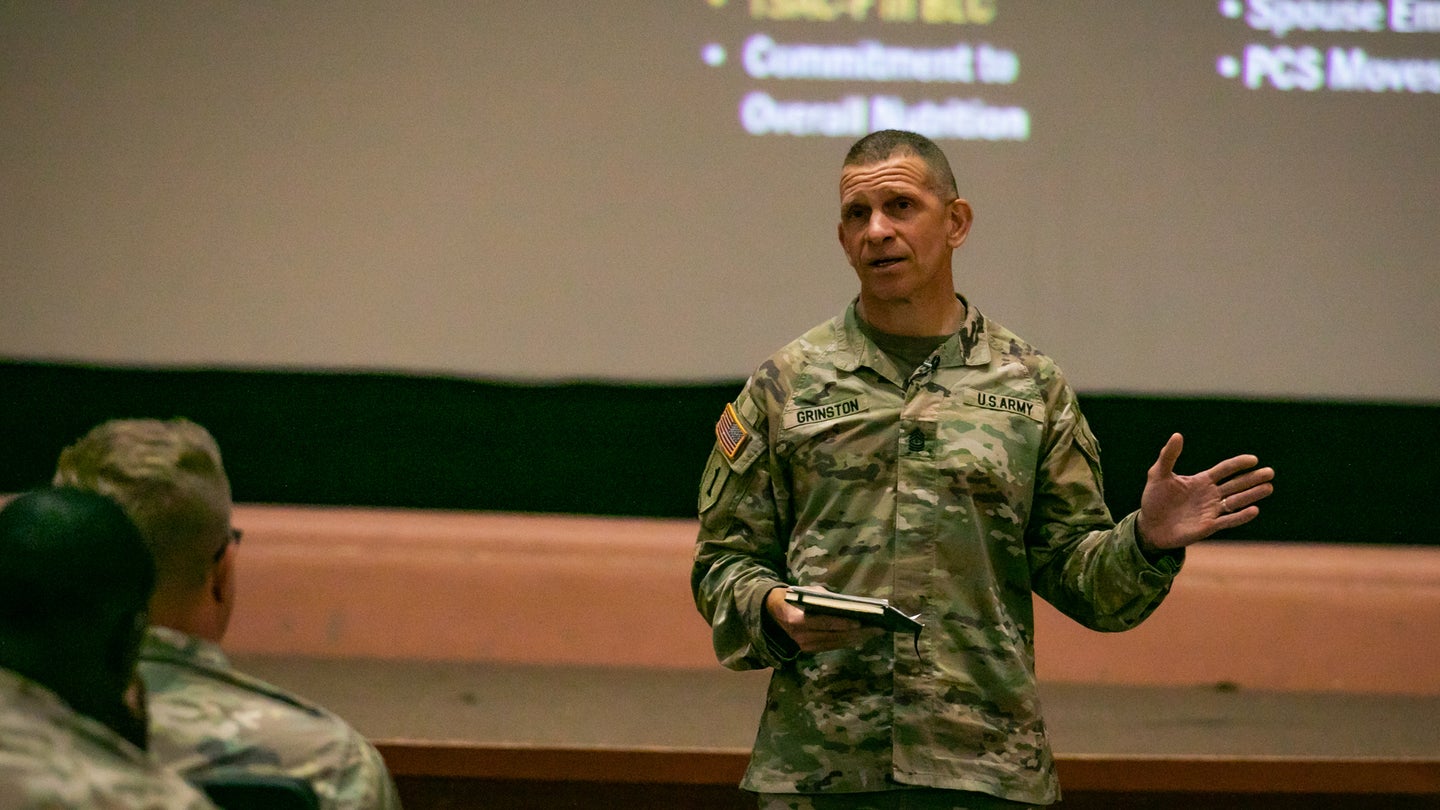 Sgt. Maj. of the Army Michael A. Grinston discusses Army initiatives during a town hall with Soldiers from the 25th Infantry Division on Schofield Barracks, Oahu, Hawaii, May 18, 2022. (Sgt. Rachel Christensen/U.S. Army).
SHARE

If there’s one thing an Army noncommissioned officer knows, it’s how to work smarter, not harder — and that includes getting ideas from the force on how to fix what’s broken.

Sgt. Maj. of the Army Michael Grinston and 150 nominative sergeants major will gather later this month in El Paso, Texas, to discuss solutions to some of the service’s biggest problems, including soldier development, suicides, and sexual assault and harassment. And to get ahead of ideas for how to tackle those issues, Grinston’s staff posted on the Army Reddit page, which is popular among veterans and junior soldiers, asking for thoughts and feedback on Monday.

“Soon, SMA is hosting a summit for CSMs to come together and work on big Army problems by addressing four specific areas,” Grinston’s spokesperson, Sgt. 1st Class Will Reinier, said in the Reddit post. “I would like to get some insight from the sub that can be used as input for the working groups and conversations they will have.”

The four areas the Reddit post asked for feedback on were leader engagement, mentorship, leader development, and alcohol culture. Reinier said they were looking for “low/no cost solutions that can be adapted for any unit immediately and don’t require 5 years and an academic study.”

The thread received hundreds of responses.

Many were relatively simple:  fix the barracks; make leaders improve their time management; hold leaders to the same standards as their soldiers; encourage soldiers to use behavioral health resources and actually mean it; and recognize when something doesn’t have to be done that day and stop work at a reasonable hour to give soldiers time with their families.

Several of the responses focused on improving culture. One person who said they work in an inpatient psychiatric unit at a military treatment facility said leaders need to encourage soldiers to seek help “when things start to feel off, not just when they’re full-blown depressed or suicidal.”

The commenter added that “Often times soldiers first engagement with [behavioral health] is with me on the inpatient ward.”

Other responses were more technical. An Army medic wrote that when it comes to behavioral health, there just aren’t “enough appointment slots available.” They said the Army should hire more social workers and counselors to work with soldiers who are “less at risk” and can be treated over the phone. That way, the commenter said, soldiers won’t have to get new providers when they move installations and can establish “a trust and bond with their [behavior health] provider that will truly help them.”

Another person commented that all officer and noncommissioned officer evaluation reports should have a “morale” section, in which their soldiers can rate them on a scale of 1-10 for general morale in the unit and trust in leadership.

“If the leader thinks they’re amazing, but their soldiers hate them the disconnect will show on their NCOER/OER. … This will help toxic/counter-productive leaders be identified as they move up in leadership positions,” the comment said.

One company commander commented that they need “time and freedom to make common-sense decisions and actually lead rather than be obsessed with stupid crap.”

“Neither my unit nor the Army will fall apart because not all of my 350-1 training is green in [the Digital Training Management System], or whatever other useless requirement has been imposed by higher … Cut back on the bullshit, give me the time and freedom to be an engaged leader and, by extension, my [noncommissioned officers]. This has to be a culture change across the Army.”

Sgt. Maj. Osvaldo Martinez, the sergeant major for the Army’s People First Task Force, said he noticed most of the responses focused on leader development. And that topic is something he’s found to be on Grinston’s priority list. While the summit happening this month only happens once a year, Grinston has been holding virtual monthly meetings with command sergeants major across the force. The monthly meetings have the same intent as the one this month does: pitch solutions, talk about ideas, and share what has worked for your unit and your soldiers.

“One of the things he’s consistently talking about is leader development,” Martinez said of Grinston. “His idea, his thought process is we have to ensure that our brigade and battalion command sergeants major have a plan to develop their sergeants and staff sergeants in the organization, who are really the execution arm for us. They’re the ones who are really with the soldiers every single day.”

But leadership development is, of course, only one piece of the puzzle. When it comes to “harmful behaviors” like suicide and sexual assault and harassment, it’s “not just as simple as having one answer,” Martinez said. Hence the other areas of interest in the Reddit thread, like alcohol culture and mentorship.

When it comes to alcohol, Martinez said they know soldiers can sometimes feel pressured to drink more than they normally would in order to fit in with the rest of their unit. The Army wants to find a way to reduce that stigma. He also said that a “good portion of our sexual assaults” that occur in the Army happens among young soldiers when alcohol is involved.

“When we talk about prevention, how do we reduce the alcohol culture in that population of soldiers where sexual harassment and sexual assault happen?” he said.

And while going to Reddit is surely a unique way to gather feedback from the force, it’s not all that uncommon for Grinston to turn to social media. He’s no stranger to Reddit, and he’s earned a reputation on Twitter for engaging with soldiers and critics alike on any number of topics.

It’s unclear when ideas discussed in the summit this month will be implemented if the Army chooses to move forward on them — without knowing what the ideas are, there can’t be an established timeline. However, Grinston is “eager” to get initiatives into motion “very quickly,” Martinez said.

But leaders also don’t need to stand around and wait for higher-ups to make a change. They should always be seeking out ideas from their soldiers, who Martinez called “extremely creative,” and fostering an environment in which soldiers feel comfortable talking to their leaders about the problems they’re experiencing.

Martinez mentioned one soldier in particular who emailed Grinston directly with an idea that Martinez is going to look into further. And while Grinston likely doesn’t want every soldier in the Army emailing him their suggestions, Martinez said they do want soldiers to share their ideas and concerns with their leaders, who should bring those ideas forward.

“Your Army senior leaders are listening,” Martinez said. “And soldiers need to know that and understand that and, more importantly, believe it.”