As women were slowly gaining equality in the 80s, the Army put a ‘pause’ on them

"I just don't think our society will ever want to have women in front-line combat," a defense official said in 1981. 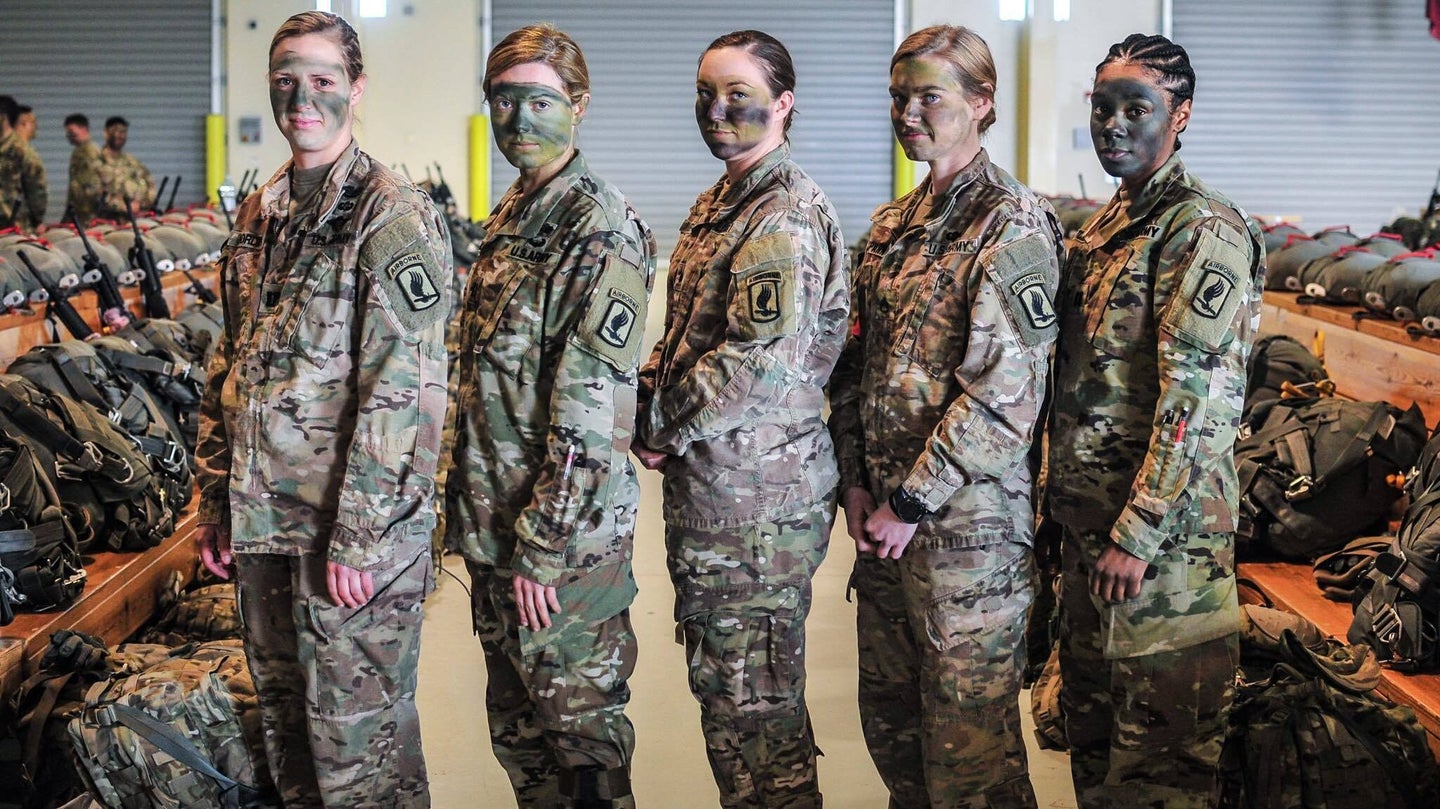 The Army recently announced that the 100th female soldier has completed Ranger School. That’s quite a shift: It wasn’t so long ago that the Army sought to put a “pause” on women in general. They thought too many women anywhere in the ranks would harm readiness.

Yep. The “Woman Pause” of the 1980s. The Army’s reaction to the 1970s women’s liberation movement was to pause women entirely. For decades, the military had enforced strict caps on the number of women it would admit – women could not comprise more than 2% of the total armed forces. Each service was limited to one female O-6.

When the women’s liberation movement took off in the 1970s, the number of military women spiked from less than 2% of the total troop count to almost 9%, as the services loosened restrictions to attract female service members.

Sweeping policy changes reflected the increased presence of military women during this period. Even the Marine Corps opened up to women 33 jobs that had previously been reserved exclusively for men, including embassy security duty, combat engineer, and combat service support such as logistics and aviation maintenance.

Though at the time, women were barred from serving in combat arms and aviation roles, opening jobs that had been the exclusive domain of men was an unprecedented change. The number of female Marines increased by a third. In 1977, female Marine officers started training at The Basic School with men, learning the same basic combat tactics– that was thanks to the Commandant, Gen. Louis Wilson, who in 1976 mandated that Marine Corps school develop “curricula to ensure that the training offered prepares Marines to lead, irrespective of sex.” Previously limited to wearing skirts every day, women could finally wear pants and camouflage utility uniforms.

The entire nation was changing. Up until 1972, unmarried women couldn’t even access birth control – nor could they serve on juries before 1973. It wasn’t until 1974 that women, especially unmarried women, could obtain credit cards or get a loan without the signature of a male relative.

So what changed? Why were women in the military suddenly “put on pause” after a decade of robust progress?

Retired Marine Lt. Col. Beth Wolny, a military gender expert, says there are two reasons for the jump, and subsequent drop, in women’s numbers during the 1970s and 1980s: the end of the draft and the arrival of the Equal Rights Amendment (ERA).

Public condemnation halted the draft for the Vietnam War in 1973 when few men were keen to sign up for military service amid an unpopular and brutal war marked with rampant mistreatment of veterans. The end of the draft established the modern all-volunteer force.

But the military still needed new recruits, and it was one of the few employers who actually followed the still-new “equal pay for equal work” law. That generated interest among women who were eager to earn more money.

The second reason, along with the new all-volunteer force, was that the ERA was on the horizon.

The ERA is a congressional proposal to amend the Constitution to guarantee equal rights “on account of sex.” While Congress passed the ERA in 1972, officially amending the Constitution hinges on getting three-fourths of the states to agree on, or ratify, the two-sentence long amendment: “Equal­ity of rights under the law shall not be denied or abridged by the United States or by any state on account of sex. The Congress shall have the power to enforce, by appro­pri­ate legis­la­tion, the provi­sions of this article.”

States had seven years to ratify the ERA, but it never happened by the 1979 deadline. The ERA was a political casualty in the run-up to the 1980 presidential election. Critics of the ERA played on voters’ fears that passing it would lead to gay marriage, same-sex bathrooms, and taxpayer-funded abortions. Congress extended the deadline to 1982, but the campaign against the ERA was so effective that the amendment still fell short of winning approval from at least 38 states, the minimum number necessary for ratification.

As 1982 approached and it became clear that the ERA wouldn’t get the necessary support to be ratified, the military started reversing its progressive policies regarding women.

After Marine commandant Gen. Robert Barrow took over in 1979, the 33 jobs that had been opened to women by his predecessor were quickly closed off. Male and female Marines were re-segregated at Officer Candidate School. Some people believed that “Marine Corps officer training had gone soft” since women had managed to complete the same training as men, and Barrow responded by eroding progress for women. Wearing pants became, once again, prohibited for women. Femininity was emphasized over job opportunities.

Meanwhile, the Selective Service bill returned to Congress in 1980 after a brief hiatus, renewing the requirement for men to register for possible future drafts. In 1981, the Supreme Court ruled that women wouldn’t be subject to conscription.

“The services purposefully restricted the opportunities open to women, under the auspices of protecting women from combat,” Wolny said. To this day, young American men are still required to register with the Selective Service. Women are not, despite recent efforts to change that.

The possibility of women being drafted, especially into combat, became the center of attention for critics of the ERA throughout the late 1970s and into the 1980s (to see it played out, watch this award-winning limited series, starring Cate Blanchett).

In 1981, after Reagan took office and the ERA appeared to be doomed, the Army Chief of Staff announced that he had “called a pause to further increases in the number of Army women.” He hoped to keep women’s numbers stagnant at 65,000 for at least 4 years while the military conducted “tests” to assess the consequences of allowing more women into the military. It’s unclear what exactly, if anything, was being “tested.”

“We will continue to recruit women at a rate sufficient to sustain the current level of 65,000 enlisted women — that is, we will recruit about 16,500 women in the coming year,” Gen. Edward C. Meyer told reporters in Washington, D.C. “I’m simply not certain … that the policies we have gradually arrived at [are] appropriate for a war-fighting Army.”

Commanders were unhappy about what they deemed were “the negative effects of women on the nation’s combat readiness.” Time lost to pregnancy and single parenthood were among the reasons listed for halting efforts to recruit women, though data at the time showed pregnant and postpartum servicewomen managed to report for duty twice as much as male service members who were dealing with disciplinary issues like unexcused absences and drug issues. To this day, military women are routinely ostracized and stereotyped for becoming pregnant while on active duty.

Leaders in favor of the pause noted that male service members lacked sufficient time to adjust to women’s “presence socially” — whatever that means. Sexual harassment and assault were prevalent. Instead of tackling these issues, they figured that the best way to stop sexual violence towards women would be to keep to just keep more women from joining the military. One retired female general observed at the time that, “deep down there’s this feeling that women who join the military are asking for it. There’s still this feeling that this is a man’s Army. I don’t think that’s going to go away for a long time.” It hasn’t.

Thankfully the Woman Pause didn’t last. Lawmakers pushed the Army to reverse course, and eventually, they did. The Army also foresaw challenges with recruiting sufficient numbers of men, forcing leaders to reconsider the Pause.

The Assistant Secretary of Defense knew what the real issue behind the Woman Pause was. It wasn’t a matter of whether or not women could perform to a high standard, it was about whether the country was ready, or ever would be, to have women in “front-line combat.”

“I just don’t think our society will ever want to have women in front-line combat, and as long as you don’t have that, you’re really sort of limited as to the jobs that you can give them,” Lawrence Korb said in 1981.

Yet the women who graduated from Ranger School, Female Engagement Teams sent to Iraq and Afghanistan, female fighter pilots, and women who have been killed on active duty in combat, show that military women are more capable than 1980’s military leadership ever thought possible. Even if they still aren’t guaranteed equal rights under the Constitution.