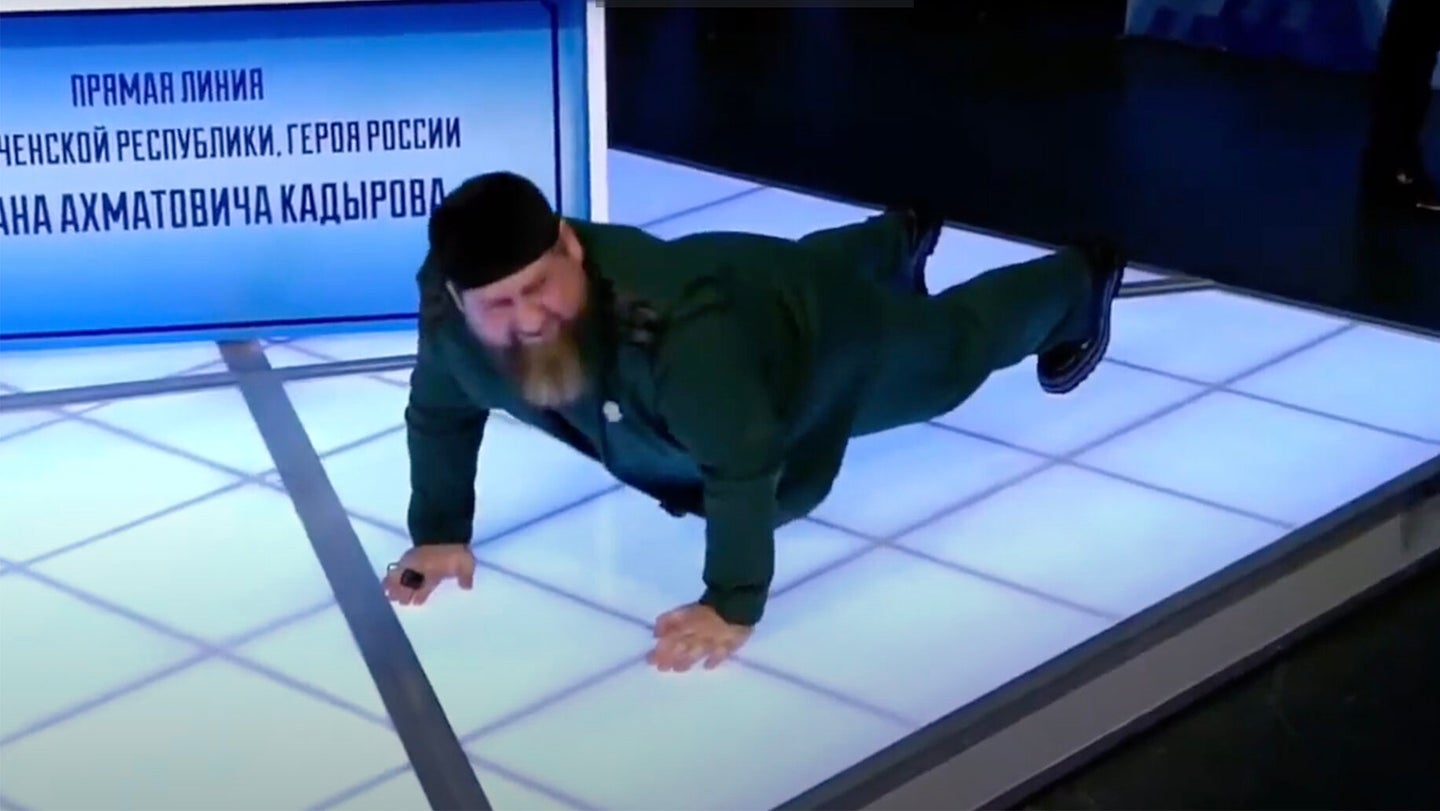 Chechnya’s leader Ramzan Kadyrov has a well-deserved reputation as a brutal strongman, but it’s clear that he has not stepped foot in a gym for quite a while.

The video shows Kadyrov bending his elbows slightly as he appears to dry hump a glass floor roughly 34 times. (Full disclosure: This reporter performed much worse when he attempted the Army’s combat fitness test in 2011.)

For insight about what real push-ups should look like, Task & Purpose consulted a Marine Corps video that demonstrates the proper technique for the exercise — the Marines are so fixated on the idea of the perfect push-up that legions of veterans spend all day criticizing people on social media for not doing push-ups correctly.

The Marine Corps’ video makes clear that a push-up involves bending your elbows and lowering your body until your upper arms are at least parallel with the ground or floor. Kadyrov does not appear to have lowered himself far enough to meet the push-up’s basic criteria.

A Marine Corps officer who has trained recruits at boot camp confirmed to Task & Purpose that Kadyrov failed to complete a single push-up correctly in the video.

“None of his push-up attempts would have counted on an Initial Strength Test at boot camp because he lacked full range of motion,” said the Marine officer. “He did not go all the way down (upper arms parallel to the deck) or all the way up (arms fully locked out) on a single repetition.”

Instead, Kadyrov performed “partial range-of-motion” push-ups, the officer said. If he were a Marine recruit, the Corps would not have allowed him to begin boot camp because he would have scored a zero on his Initial Strength Test.

“A drill instructor would have called his recruiter to ask why they sent him unprepared to boot camp,” the Marine said. “He would have been sent into a physical conditioning platoon to develop his strength and improve his push up form so he could attempt to pass the IST again and start training.”

Kadyrov has ruled Chechnya for more than 15 years. A close ally to Russian President Vladimir Putin, Kadyrov helped Russia win the Second Chechen War from 1999 to 2009. The group Human Rights Watch found in 2006 that Kadyrov’s forces had systematically tortured and disappeared prisoners.

So why would Kadyrov jeopardize his reputation as the lord of life and death by showing the world that cannot do push-ups correctly?

“It is all part of the Chechen machismo, similar to Latin and Italian culture, to show he is a tough guy,” said Glen Howard, an expert on Chechnya and Russia with the Jamestown Foundation think tank in Washington, D.C. “He does this periodically in a Kim Jong Un kind of way, to show that he is the tough man and supreme leader of a society that is unhappy with Kadyrov’s backing of Putin in the war in Ukraine.”

From the video, it’s clear that Kadyrov needs a personal trainer if he wants to impress people with his feats of strength. Thankfully, Steven Segal should be available.