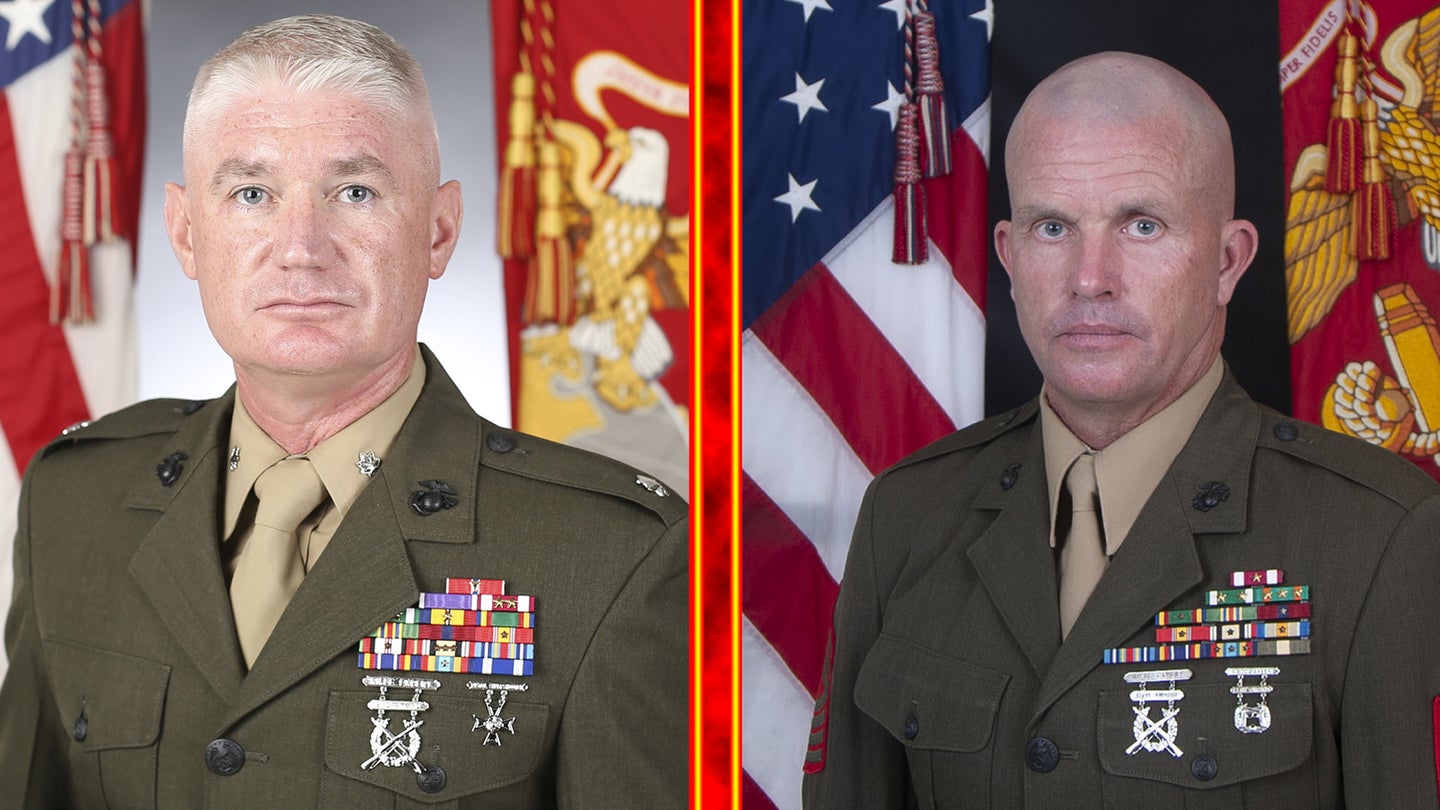 The battalion commander and top enlisted leader for 3rd Battalion, 3rd Marine Regiment were relieved of command on March 31 after an investigation found both had “exercised poor judgment” for allowing a Marine to be arrested in front of an entire company and then implying the man was guilty of selling drugs, according to a redacted copy of the investigation.

Eight days after the Marine was arrested, an anonymous Inspector General complaint was submitted against Lt. Col. Benjamin Wagner and Sgt. Maj. Jayson Clifton, according to a redacted copy of the command investigation, which Task & Purpose obtained through a Freedom of Information Act request.

The arrest took place as Wagner was briefing his battalion’s Headquarters and Services company about a command climate survey. Immediately afterward, Wagner again used poor judgment when he continued his briefing and used a racial slur to describe one of the Marines in attendance to demonstrate how such language is unacceptable, the investigation found.

The investigation also found that the battalion’s leadership had not followed proper procedure in denying liberty to a Marine who had tested positive for drug use, and one of the two men “acted derelict in his duties” by drinking alcohol at the start of mountain warfare training. Because both Wagner and Clifton’s names were redacted from the investigation, it is unclear which one consumed the alcohol.

Maj. Gen. Jay Bargeron, commander of the 3rd Marine Division, wrote in his endorsement of the investigation that he relieved both men after losing confidence in their ability to lead.

“Their actions failed to ensure all personnel under their charge were treated with the dignity and respect demanded by our Corps’ values,” Bargeron wrote on April 7.

When reached by phone, Clifton declined to comment. Wagner’s attorney Timothy Parlatore, who attended the U.S. Naval Academy with Wagner, said that his client’s relief of command is “a tremendous loss for the U.S. Marine Corps.”

“Ultimately, this whole thing is just an extraordinarily unfortunate situation and I wish that we had had the opportunity to sit down and present the other side to the general before he made that decision,” Parlatore told Task & Purpose.

The investigation found that the Naval Criminal Investigative Service wanted to arrest the Marine accused of drug dealing by surprise to “maintain secrecy in order to preserve information and evidence.” The Marine, whose name was redacted from the investigation, could not be located at work on Jan. 10, so the arrest was planned for the following day at a company event that he was expected to attend.

NCIS agents later discovered the Jan. 11 briefing was being held in a classroom the size of a basketball court that was capable of seating about 200 people, according to the investigation.

One person interviewed for the investigation said he expected “a less visible venue for the arrest” than in front of the entire company, and he also expected there would be a hallway next to the classroom that would have allowed him to discretely enter the back of the room to remove the Marine, but he did not mention any of this to the battalion’s leadership prior to the arrest.

In any event, after the Marine arrived at the briefing, he was asked to identify himself, handcuffed, and escorted out of the classroom with the entire company watching, according to the investigation.

What happened next is slightly unclear because both Clifton and Wagner’s names have been removed from the copy of the investigation obtained by Task & Purpose, which faulted both men for making comments about the Marine in front of the rest of the company.

During the arrest, the Marine was described as a “drug kingpin” who was allegedly selling cocaine and one of the men claimed the company did not have the “balls” or “sack” to report drug dealing in the barracks, according to the investigation.  Exactly who said what cannot be determined due to the redactions.

Parlatore told Task & Purpose that NCIS decided to arrest the Marine at the company event to preserve evidence in his barracks. He also said that “statements may have been made” about whether the Marine was guilty, but he added: “That is, to my mind, something where our commanders probably could receive better training – what they should and shouldn’t say.”

Indeed, a judge ruled in 2019 that a Marine battalion commander and sergeant major in California had violated the rights of 16 Marines who were publicly arrested for alleged drug offenses during an 800-person battalion formation at Camp Pendleton after the Marines’ attorneys argued that the public arrests rose to the level of unlawful command influence.

The investigation not only faulted Wagner for how he handled the arrest, but it determined that he made another error right afterward as he continued with his command climate briefing.

Wagner told the investigator that he was trying to point out that sexually derogatory language is just as inappropriate as racial epithets. To do so, he said it would be wrong to refer to one of the Marines attending the briefing by using a racial slur for Hispanic people.

Wagner also said he had discussed the same issue with other companies without using racial slurs.

The Marine whom Wagner called out told the investigator that he felt “shook” and uncomfortable by Wagner’s comments. Other witnesses described Wagner’s briefing as “unprofessional” and “out of bounds.” But the company’s equal opportunity representative told the investigator she did not have an issue with Wagner using the racial slur “because it clearly occurred for an instructional purpose.”

The investigation determined that Wagner had used the racial slur to instruct the Marines, but he should have made his point by just saying some words are unacceptable and “he should have avoided using a specific ethnic-minority Marine as the example for his slur.”

Parlatore said it is a “judgment call” to determine whether to provide specific examples of unacceptable language. He also pointed out that Wagner has not been charged with misconduct for his comments.

“There’s no regulation that says: When conducting training, don’t give any examples of the type of things you don’t want to see,” Parlatore said.

This is at least the second example of a Marine officer being disciplined for using a specific racial slur while making the point that such language should not be used. Maj. Gen. Stephen M. Neary was fired in October 2020 for telling Marines who had been listening to a rap song that the N-word should never be used.

An Inspector General of the Marine Corps report about the incident that was released in December 2020 found that Neary had made the situation worse by addressing the Marines who had been listening to the music as “you people,” Stars and Stripes first reported. One of the Marines who witnessed the event said in a statement that Neary had told the group listening to the rap song that the N-word “is the reason ‘you people’ are doing riots in the U.S.”

Another of the investigation’s findings was that the leadership of the 3rd Battalion, 3rd Marine Regiment did not follow proper procedures when it restricted a Marine to the barracks without nonjudicial punishment.

The Marine had become an NCIS informant after submitting a urine sample that later tested positive for cocaine. His request for leave from late December to early January was denied and he was verbally placed on base restriction, but he was not provided with the necessary paperwork needed for a formal restriction, according to the investigation. Moreover, the Marine was not required to check in with the officer of the day every four hours, yet he did so anyway.

Afterward, the Marine received non-judicial punishment in January and was administratively separated from the Corps the following month, the investigation found.

The investigation also found that the battalion’s leadership drank alcohol prior to a training event at the Marine Corps Mountain Warfare Training Center in California without receiving a special exemption from the installation commander.

In late January, the leadership held a send-off in the command’s 15-man tent in the training center’s Lower Base Camp, according to the investigation.  One of the battalion’s leaders, whose name was redacted from the investigation, bought a bottle of Maker’s Mark whiskey from the base exchange and shared about an inch of alcohol with the others in the tent for a toast.

That person told the investigator that although drinking is not allowed in the field, the Lower Base Camp is “not the field.” He also said that beer and other alcoholic beverages had been available to Marines in his previous deployments to the training center, which had since banned alcohol consumption due to the novel coronavirus (COVID-19).

Several witnesses said they had been briefed that they were not allowed to drink alcohol at the Lower Base Camp and that the Marine Corps Exchange was off-limits, the investigation found.

The investigator concluded that the battalion member who drank and provided whiskey to the others in the command tent was “derelict in his duties” in violation of Article 92 of the Uniform Code of Military Justice.

While Parlatore declined to say whether Wagner had bought and shared the whiskey, he said, “Nobody has found him to be derelict of duty.”

“The drinking thing – that’s kind of a silly situation,” Parlatore said. “There’s actually a club there and they were asked if they wanted to open the bar. You go from one base to another; a lot of them are allowing alcohol. That was not something that anybody was aware was an issue there.”

Wagner and Clifton were replaced by Lt. Col. Felix Guerra and Sgt. Maj. Timothy Eldredge respectively. Eventually, the battalion is expected to be incorporated into the 3rd Marine Littoral Regiment.