One of the military’s most infamous modern boondoggles gets even worse. 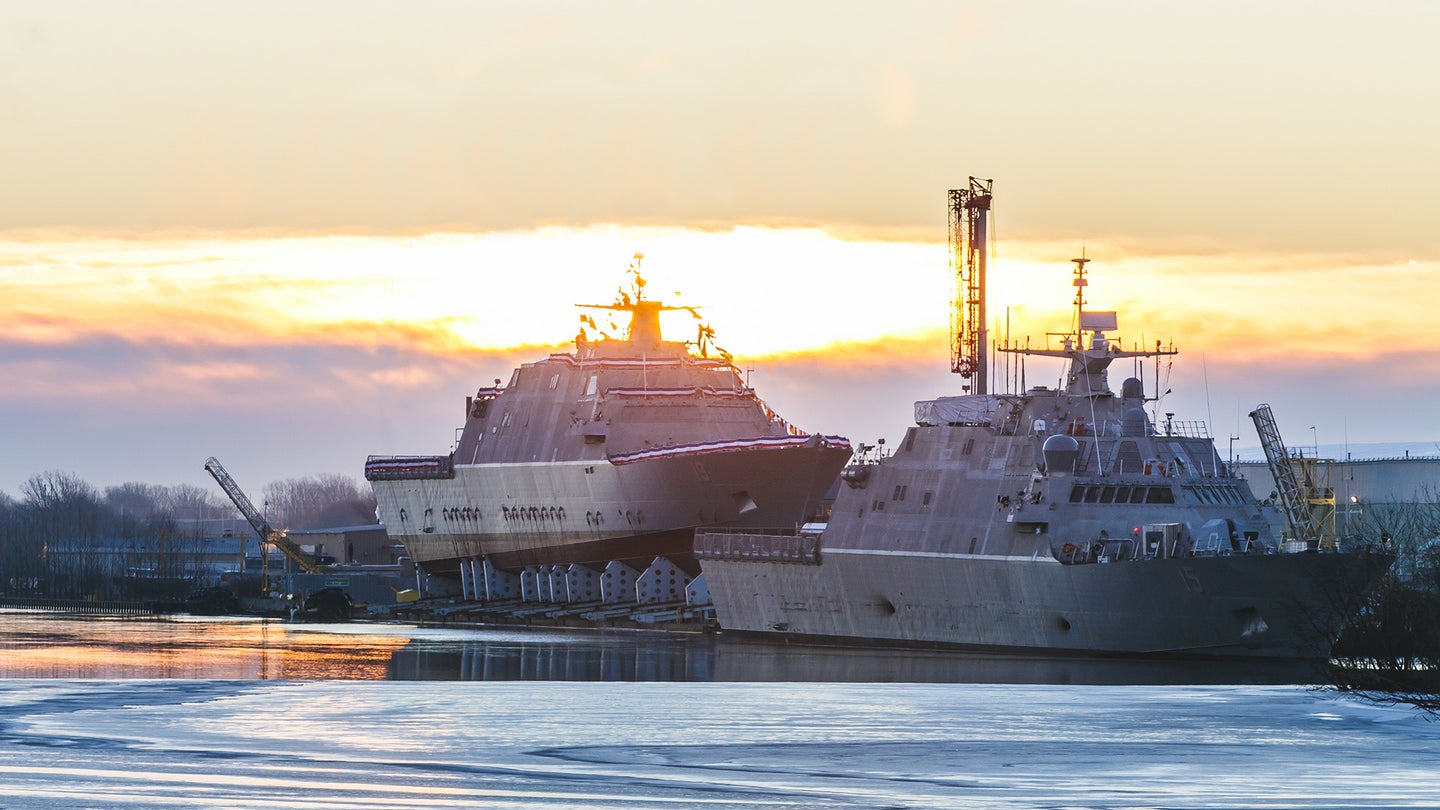 The USS St. Louis and USS Billings were commissioned since 2019 but the Navy wants to retire them already. (U.S. Navy photo.).
SHARE

The Navy’s Littoral Combat Ships have long been the butt of scathing jokes, owing to a massive budget, cost overruns and pervasive mechanical problems. Now, the program is set to get even more embarrassing as the Navy seeks to decommission four ships that have only been in service a few short years.

The Littoral Combat Ship USS St. Louis was just commissioned in August 2020, but the Navy wants to decommission the vessel in September 2023, just after the ship’s third birthday.

That’s because the Navy’s budget for fiscal 2023 calls for decommissioning nine Freedom-variant Littoral Combat Ships, which have been plagued with problematic propulsion systems. These Littoral Combat Ships are also among the newest vessels in the Navy. Including the St. Louis, four of the Freedom-variant ships that the Navy wants to retire have been commissioned since 2019.

Ergo, the Navy is in a quandary. The service remains locked in a forced marriage with its newest Freedom-variant Littoral Combat Ships even though the Navy is so fed up with the vessels that Chief of Naval Operations Adm. Michael Gilday has suggested giving or selling the ships to South American countries.

In total, the Navy expects to save about $3.6 billion in repairs, upgrades, and retrofits by decommissioning 24 ships next fiscal year, including the nine Freedom-variants. The LCS program has been anything but cheap; the  Navy estimates $60 billion will be needed to operate and support the planned 35 ships.

Navy Secretary Carlos Del Toro told Congress in June that a major reason why the Freedom-variant Littoral Combat Ships are slated to be mothballed is they could not conduct anti-submarine warfare missions.

“Regretfully, these ships also were designed and planned over 15 years ago to meet a different threat,” Del Toro told the House Appropriations Subcommittee on Defense.

That hasn’t stopped the Navy from building more Freedom-variants though. The USS Minneapolis was commissioned in May; USS Beloit was launched and christened that same month; and four other ships are under construction, according to the Navy.

The Navy has spent so much money on Littoral Combat Ships so far, that it is hard to throw that investment away, and Navy officials can be tempted to think that with just a little more time and effort, the problems vexing the ships can finally be overcome, van Tol told Task & Purpose.

“But that’s the classic ‘sunk cost’ conundrum,” van Tol said. “How can one be confident that ‘just a little more’ will in fact solve what may turn out to be more serious and/or serial new problems. The fact that many of the LCSs are quite new just makes this harder.”

The issue of whether the Navy should decommission Freedom-variant Littoral Combat Ships – especially after only a few years – has divided Congress, and not necessarily along party lines.

“Though Littoral Combat Ships are troubled by a set of technological challenges, they are still functional and could provide important deterrence value against China,” said Wicker, the second-highest ranking Republican on the Senate Armed Services Committee. “It is simply a waste of taxpayer dollars to retire battle-ready ships without an immediate replacement for them. We cannot afford to shrink our fleet while China rapidly grows its navy.”

That’s a sentiment shared by Rep. Elaine Luria (D-Va.), a retired Navy commander who has been one of Congress’ most vocal opponents to the Navy’s plan to decommission ships.

“The LCS [Littoral Combat Ship] has not lived up to how it was advertised, everyone knows that,” Luria told Task & Purpose on Wednesday. “Though instead of scrapping four LCS ships that we have already invested in, we must explore what missions they can be used for. The fact is the LCS ships are here, and they have capabilities still useful to the Navy. These almost brand-new ships can be used to support lower-level missions like drug interdiction while other ships are used for high-end operations.”

But Rep. Jackie Speier (D-Calif.) has made clear that she thinks the Freedom-variant Littoral Combat Ships cost too much to build and maintain. At an April 14 hearing, Speier noted that three Freedom-variants that had been commissioned since late 2016 – USS Detroit, USS Little Rock, and USS Sioux City – had recently experienced major failures of their propulsion systems.

“I have a very different view of the Littoral Combat Ship than my colleague, and I’d like to drill down on this a little bit,” Speier said at the House Armed Services Committee, not mentioning Luria by name. “The Freedom class is – in my view and in the view of many – terribly unreliable. The Freedom-class LCS may also have a class-wide defect: A flawed combining gear that breaks early in [the] life of the ship. That will require massive and expensive taxpayer-funded reconstruction. In the meantime, the last administration increased the OP [operations] tempo to new highs.”

If Congress ultimately allows the Navy to decommission the Freedom-variant Littoral Combat Ships, it would not be the first time that the service has retired new vessels. After the Civil War, the Navy decided it did not need ironclad warships any longer, in part because coal was so expensive, so it mothballed all its steam-powered vessels with moving turrets, said Stephen Wills, a naval strategist.

And after World War II, the Navy had so many surplus ships that brand new cruisers and destroyers made their first voyage straight to the mothball fleet, where ships are kept in storage, said Wills, a research assistant at CNA, a nonprofit research and analysis organization in Arlington, Virginia.

But just because ships are decommissioned does not mean they are unusable, said Wills, who noted that many of the ships mothballed during World War II both went back into service during the Cold War.

“You’re never gone until they actually tow you away for scrap and you end up at Brownsville, Texas, or one of those other places where we scrap ships,” Wills told Task & Purpose. “Even if you’re mothballed, you might come back.”

Nevertheless, the early retirement of nine Freedom-variants – nearly half of which were commissioned in the past three years – would underscore how little the Navy has gotten out of the Littoral Combat Ship program.

The Littoral Combat Ship was conceived during Donald Rumsfeld’s second tenure as defense secretary, when he vowed to transform the military by embracing new and untested technology. These ships were supposed to be light, fast, and able to serve as surface combatants, minesweepers, and submarine hunters.

But the idea of having each ship capable of conducting three missions proved to be impossible. To make matters more complicated: The Navy selected two very different hull designs for Littoral Combat Ships: The Freedom- and Independence-variants. While the Independence-variant has proven to be the more versatile design, 13 of the ships have developed cracks in their hulls.

Meanwhile, the 21st Century has also seen a dramatic buildup in China’s military power. The People’s Liberation Army Navy is the largest in the world and it plans to grow from 355 to 460 vessels by 2030, according to the Defense Department’s latest report on China’s military power. The U.S. Navy, in contrast, expects to shrink from 298 to 280 ships by fiscal 2027, unless Congress blocks the service from decommissioning ships.

Even though the Pentagon has determined that “LCS is not expected to be survivable in a hostile combat environment,” the commander of Naval Surface Forces wants to keep six Independence-variants in the Western Pacific to show the U.S. Navy’s presence in the region, USNI News first reported.

One possible option would be forward deploying Littoral Combat Ships to the Philippines, assuming the Philippine government would allow the vessels to be based there, said James Holmes, the J. C. Wylie Chair of Maritime Strategy at the U.S. Naval War College in Newport, Rhode Island.

China uses fishing vessels manned by its maritime militia and supported by its coast guard to assume control over Southeast Asian countries’ land and maritime territories, Holmes told Task & Purpose. By not using warships, China can infringe on other nations’ sovereignty while not appearing like a bully.

“But if you had a flotilla of light combatants armed with naval strike missiles, as our Littoral Combat Ships increasingly are, that gives you the ability to compete with China on its own terms in the gray zone,” Holmes said. “China could either deescalate to routine diplomacy in the region or escalate out of the gray zone and be exposed as the bully it is.”

The Navy has already begun equipping some Independence-variant Littoral Combat Ships with Naval Strike Missiles, which can carry a 500-pound warhead more than 100 nautical miles. In the event of a hot war between the United States and China, it’s possible that Littoral Combat Ships could use these weapons to strike back at the Chinese navy, Holmes said.

“China’s navy relies heavily on light missile-firing craft to punish a conventional battlefleet,” Holmes said. “No reason we couldn’t use Littoral Combat Ships in and around Western Pacific islands to snipe against the PLA [People’s Liberation Army] Navy and mete out some punishment of our own. Think of it as a latter-day counterpart to the old PT boats of PT-109 and John F. Kennedy fame: expendable, maybe, but also hard-hitting if used correctly.”

Whatever happens to the Freedom-variants, it’s likely that the last chapter of the Littoral Combat Ship saga has yet to be written.