A veteran and his service dog walk into a restaurant… No, this isn’t a set-up to a joke with a... 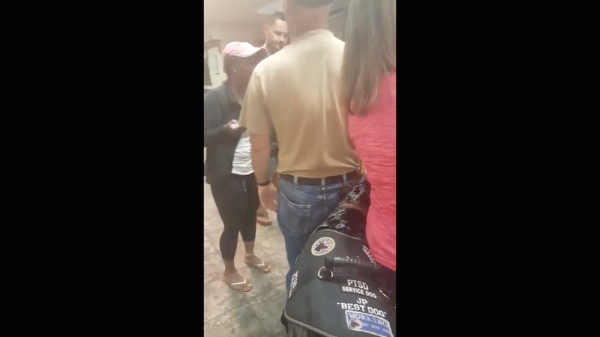 A veteran and his service dog walk into a restaurant…

No, this isn’t a set-up to a joke with a corny punchline. When a man identified as a veteran went to dine at Kathy's Crab House & Family Restaurant in Delaware City, Delaware, a fellow diner lost her cool and began screaming about the presence of his service dog, which he says is for PTSD.

“It's disgusting to have an animal inside of a public restaurant,” the diner shouts, as a camera records her three-minute-long adult tantrum.

Another patron gets involved in the screaming match, adding that the veteran fought for the country, shouting, “That’s why he has the dog.”

But this doesn’t sway the offended diner, who calls the vet’s defender a “bitch” and a “whore.”

The veteran also tries to reason with her, asking if she can calm down for “30 seconds.”

“Y'all can't change my goddamn opinion,” she screams. “It should be a separate section for a fucking animal.”

Eventually, others in the restaurant join in screaming at her to get out.

Meanwhile, the service dog, a Great Dane whose harness suggests his name is “PJ,” keeps his cool better than anyone else in the room. Talk about a good boy.