The Sergeant Major of the Marine Corps, Sgt. Maj. Micheal Barrett, raised a few eyebrows on Capitol Hill with his... 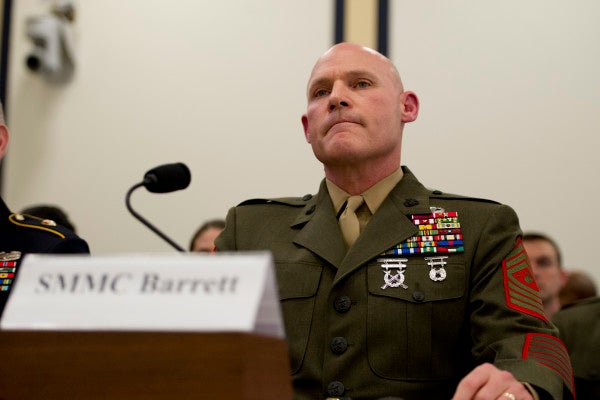 The Sergeant Major of the Marine Corps, Sgt. Maj. Micheal Barrett, raised a few eyebrows on Capitol Hill with his remarks about proposals to cut the pay of active-duty service men and women.

“I truly believe it will raise discipline,” he said of the proposed cuts, according to Leo Shane III with Military Times. “You'll have better spending habits. You won't be so wasteful.”

“In my 33 years, we've never had a better quality of life,” he added. “We've never had it so good. If we don't get ahold of slowing the growth, we will become an entitlement-based, a health care provider-based Corps, and not a war fighting organization.”

Let me preface what follows by saying that I have the utmost of respect for Barrett and consider him to be among the greatest Marine warriors in my generation of veterans.

But he’s dead wrong on this one.

In considering his claim, I'm reminded of something an outstanding Marine lieutenant colonel once told me about what makes the Marine Corps special:

Barrett’s remarks, and the proposed legislation, could potentially adversely impact the Marine Corps and, by extension, America’s national security. Beyond decreasing the morale of the current rank and file Marines, it also threatens the Corps’ ability to retain its top Marines, and the military’s ability to recruit talented people into its ranks.

Making active-duty members of the military the latest victims of political dysfunction in Washington shouldn’t come as a surprise, but it is particularly hard to bear.

“They want to know about what new equipment are we getting, are we continuing to modernize,” Barrett said. “Just because the budget sucks, does that mean we’re not going to get our new gear?”

In advocating military technological advancement at the expense of the financial welfare of lower ranking enlisted Marines, Barrett is robbing those Marines of his support as their senior enlisted leader, and that's tragic.

Barrett is the Corps' top enlisted Marine, and in that role, is supposed to represent the interests of the enlisted Marines to the Commandant of the Marine Corps and leadership in Washington. No one joins the Marine Corps for the money, and Barrett is right that “Marines don't run around asking about compensation, retirement modernization,” but with all that they are asked to do, Marines need to be compensated fairly for their service. In his role as Sergeant Major of the Marine Corps, Barrett’s should be the loudest of voices against these pay cuts. The answer is not to cut the benefits and pay of troops to fit the confines of the sequester; it is to repeal the sequester.

Your pay increases as you rise in rank, so by Barrett's logic, he's the least disciplined enlisted member of the Marine Corps.