The war against ISIS continues. 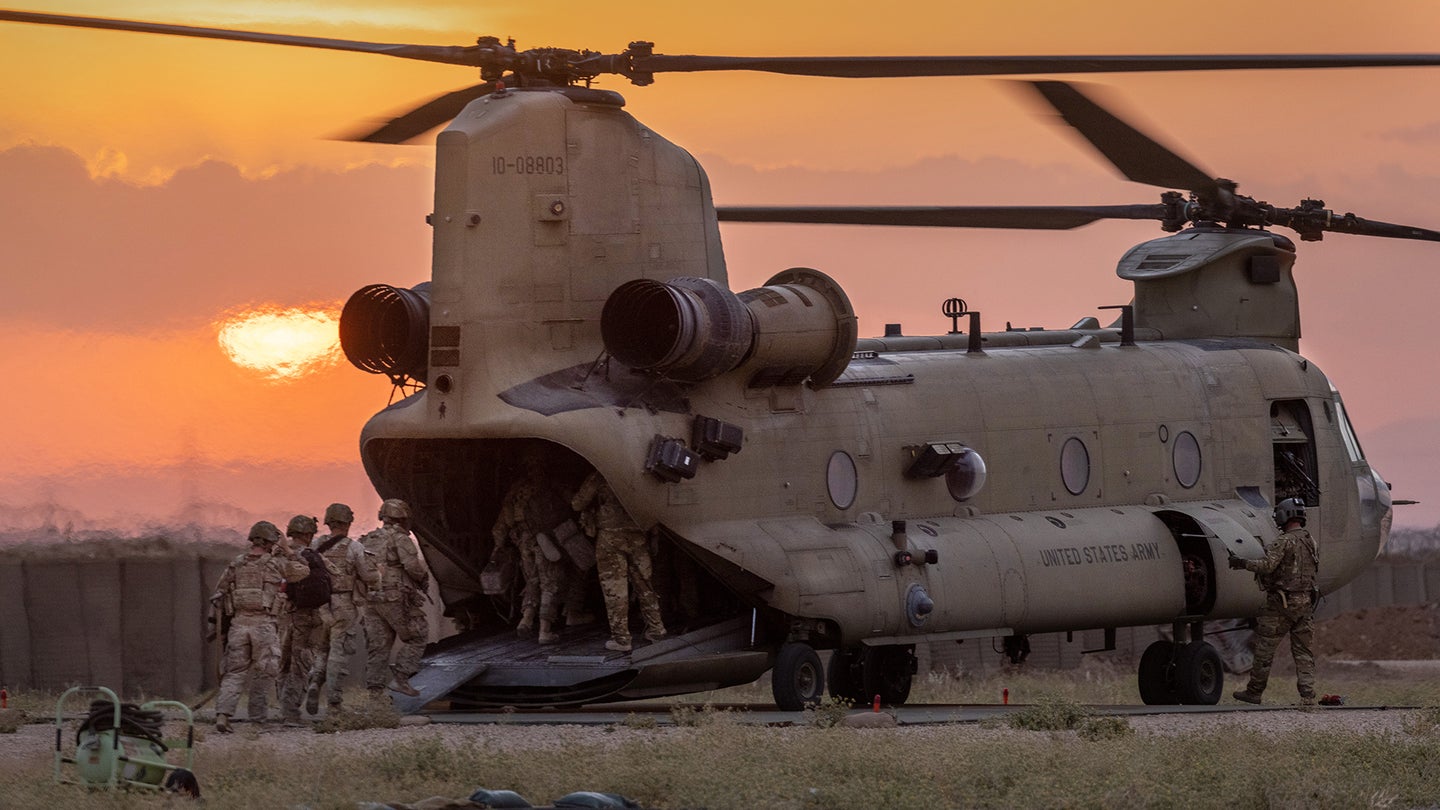 FILE" U.S. Army soldiers board a CH-47 Chinook helicopter while departing a remote combat outpost known as RLZ on May 25, 2021 near the Turkish border in northeastern Syria. (John Moore/Getty Images).
SHARE

U.S. troops in Iraq and Syria spent 2022 taking the fight to ISIS by carrying out a total of 313 missions in both countries, during which at least 686 suspected ISIS fighters were killed, including the terrorist group’s former top leader, according to U.S. Central Command.

It was also a busy year for U.S. troops in Iraq, who conducted 191 partnered operations with Iraqi forces that led to 159 suspected ISIS operatives being captured and at least 220 suspected ISIS fighters being killed, a CENTCOM News release says.

No U.S. troops in Iraq or Syria were killed or wounded during operations in 2022, according to CENTCOM.

The biggest fight took place in January, when ISIS fighters attempted to free thousands of suspected ISIS members from a prison in Al-Hasakah, Syria. It took 10 days for the Syrian Democratic Forces backed by U.S. military airpower, to crush the attack.

An estimated 420 suspected ISIS militants were killed, and 120 members of the Syrian Democratic Forces lost their lives in the battle, according to CENTCOM.

In addition to the current generation of ISIS fighters that U.S. troops are fighting, “There is a literal ‘ISIS army’ in detention in Iraq and Syria,” warned Army Gen. Michael “Erik” Kurilla, head of CENTCOM.

Another potential threat remains that the children of ISIS fighters who are currently in custody and elsewhere could become “the potential next generation of ISIS,” Kurilla warned.

More than 25,000 children are being held at the Kurdish-run al-Hol detention refugee camp in Syria, he said.

“These children in the camp are prime targets for ISIS radicalization,” Kurilla said. “The international community must work together to remove these children from this environment by repatriating them to their countries or communities of origin while improving conditions in the camp.”

The U.S. military’s strategy in Iraq and Syria appears to continue to rely heavily on killing or capturing mid-level and senior ISIS leaders. Abu Ibrahim al-Hashimi al-Qurayshi, the group’s former top leader, allegedly killed himself and his family in February during a U.S. Special Forces raid in Syria. Accused ISIS bombmaker Hani Ahmed Al-Kurdi was captured in Syria by Special Forces in Syria; Alleged senior ISIS leader Mahir al-Agal was killed by a U.S. drone strike in Syria.

In December, CENTCOM announced that U.S. troops had captured another suspected ISIS senior leader in Syria, who was identified only as “al-Zubaydi.”

Separately, Abu al-Hassan al-Hashimi al-Qurayshi, who became ISIS’ leader after the death of his predecessor in February, was killed in October by the Free Syrian Army — a different organization than the Syrian Democratic Forces, CENTCOM confirmed in November.

“We are committed and, more importantly, our partners in Iraq and Syria are committed to the enduring defeat of ISIS,” said Army Maj. Gen. Matthew McFarlane, commander of Combined Joint Task Force  — Operation Inherent Resolve, the U.S-led multinational military coalition to defeat the terror group.

But even though ISIS lost the last bit of territory that it controlled nearly four years ago, the group continues to fight, launching 74 attacks in Syria and 73 attacks in Iraq between July and September, according to a Nov. 16 report from the Lead Inspector General for Operation Inherent Resolve.

Even though elements of ISIS continue to carry out attacks, the group has not formed a major insurgency, nor does it control areas the same way as when it had a physical caliphate, said retired Army Gen. David Petraeus, who led U.S. troops in Iraq during the 2007 surge and also served as head of CENTCOM.

“The ISIS remnants survive because the underlying issues (social alienation, lack of employment, political marginalization, governmental corruption, and, of course, religious extremism) that broadly give rise to Sunni Arab grievances in Iraq and Syria have not been fully addressed,” Petraeus told Task & Purpose.

He also noted that the Iraqi security forces are still working to enhance their own capabilities needed to defeat ISIS, including intelligence, surveillance, and reconnaissance as well as intelligence fusion.

“What is required, needless to say, is U.S. advice, assistance, and enablers that can help our partners on the ground address all of these issues (including beyond just the military and intelligence aspects),” Petraeus said. “However, that has proven sensitive and challenging, given the Iraqi political situation  — and it is not yet clear that the new government will fully embrace what the US might provide, though the Iraqi Counter-Terrorism Service reportedly recognizes the critical importance of what the U.S. uniquely can provide.”