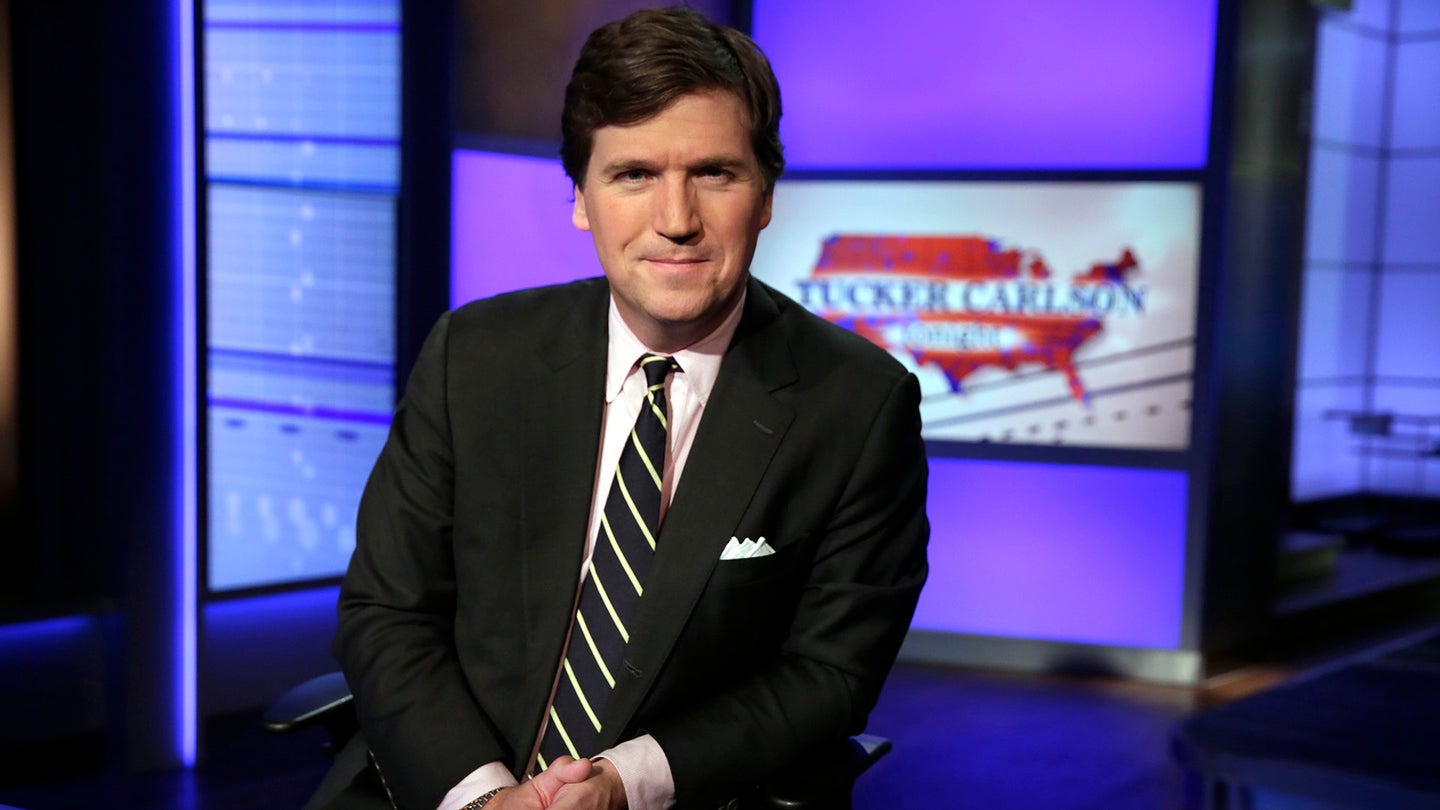 FILE - In this Thursday, March 2, 2017 file photo, Tucker Carlson, host of "Tucker Carlson Tonight," poses for a photo in a Fox News Channel studio in New York. The Anti-Defamation League has called for Fox News to fire prime-time opinion host Tucker Carlson because he defended a white-supremacist theory that says whites are being “replaced” by people of color. In a letter to Fox News CEO Suzanne Scott on Friday, April 9, 2021the head of the ADL, Jonathan Greenblatt, said Carlson's “rhetoric was not just a dog whistle to racists — it was a bullhorn.” (AP Photo/Richard Drew, File)
SHARE

Whenever I watch Fox News personality Tucker Carlson attempt to explain how the U.S. military works, I am reminded of retired Army Gen. Norman Schwarzkopf’s famous description of Saddam Hussein: “He is neither a strategist, nor is he schooled in the operational arts, nor is he a tactician, nor is he a general, nor is he a soldier.”

Carlson is a professional demagogue. That does not mean he is dumb. He didn’t become the brightest star in the universe of misinformation by being dimwitted. He is an expert in trafficking falsehoods masquerading as facts. Even Fox News’ own attorneys have argued he should not be taken seriously.

U.S. District Judge Mary Kay Vyskocil agreed with Fox News. When she dismissed a lawsuit against Carlson in 2020, Vyskocil ruled that the general tenor of Carlson’s show should make clear to viewers that what he says is “exaggeration” and “non-literal commentary” and that Carlson is “not ‘stating actual facts’ about the topics he discusses.”

“Fox persuasively argues, see [Citation], that given Mr. Carlson’s reputation, any reasonable viewer ‘arrive[s] with an appropriate amount of skepticism’ about the statements he makes,” Vyskocil wrote in her opinion.

Still, millions of Americans believe that Carlson is the Messiah of Candor, even though your average seventh grader knows more about civil-military relations than he does, as evidenced by what he passes off as insight on his nightly airing of grievances.

Carlson knows a good story arc when he sees it, and he has become fixated on attacking Army Gen. Mark Milley, chairman of the Joint Chiefs of Staff, whom Carlson has called “stupid” and “a pig.” Milley’s offense was pushing back against Reps. Mike Waltz and Matt Gaetz – two Republicans from Florida – about whether the military is indoctrinating troops with critical race theory.

Now that a new book claims that Milley was concerned that former President Donald Trump would try to use the military to illegally stay in power after losing the 2020 election, Carlson is calling for the chairman of the Joint Chiefs of Staff to be fired. In “I Alone Can Fix It: Donald J. Trump’s Catastrophic Final Year,” Milley reportedly compared Trump to Hitler. Milley’s spokesman has declined to comment on whether the book quotes Milley accurately.

On Thursday’s episode of his show, Carlson became livid when discussing a Washington Post commentary that argues Milley’s reported fears that Trump would use the military to illegally remain in power should lead to reforms in the election process. Carlson noted the Post also reported that Milley told former First Lady Michelle Obama at President Joe Biden’s inauguration, “No one has a bigger smile today than I do.”

“So, the question is: Why is Mark Milley still in command of the U.S. military?” Carlson said. “This is not a small question.”

Well, let me stop you right there, Tucker. Milley isn’t actually in command of the military. In fact, he’s not in command of anything.

I know this can be confusing, especially when Trump erroneously claimed that Milley was in charge of the Defense Department’s response to unrest during last summer’s protests against police brutality.

Milley’s actual role is to serve as the president’s military adviser, not as a commander of combatant forces. There is ample legislation that explains what the Joint Chiefs of Staff do.

OK, that’s an easy goof. I know it’s hard to get the details right ALL of the time. For example, you recently accused the Pentagon of secretly transporting illegal aliens from an Air Force base in Texas. A defense official told Task & Purpose that the Air Force has allowed U.S. Immigration and Customs Enforcement to use one of its airstrips but the military has no control about who is on those flights.

Moving on: Carlson continued to show his ignorance about the military during Thursday’s episode by alleging that the Pentagon had tried to “kill” an agreement to leave Afghanistan by “unilaterally” launching drone strikes and special operations raids against the Taliban.

“Within weeks the peace deal was dead – they killed it,” Carlson claimed. “Voters had no say in this. They operated completely independently like they run the country – little scarier than the ‘QAnon shaman.’”

Uh huh. A couple points: Although the Trump administration hailed last year’s agreement with the Taliban as a peace deal, it soon became apparent that it was really a withdrawal deal. Even though the departure of U.S. troops from Afghanistan was nominally supposed to be based on conditions on the ground, Trump continued to pull American forces out of the country despite the Taliban’s ongoing offensive against Afghan troops and police.

To blame the U.S. military for the Taliban’s decision to go for total victory is simply false. The Feb. 29, 2020 agreement was so vaguely worded that both sides have different interpretations of what the conditions actually were. U.S. officials have claimed the Taliban promised not to attack Afghan forces, but they have not provided any evidence to back that up.

The United States may, at one point, have honestly believed that it only agreed to leave Afghanistan if the Taliban broke with Al Qaeda and ceased attacks on Afghan forces, but all the Taliban heard was “America is leaving,” and they have acted accordingly ever since.

Representatives from Fox News did not respond to emails requesting a response from Carlson for this story. Milley’s spokesman and the Pentagon declined to comment.

Trump issued a statement on Friday saying he never considered using the military to cling to power and he claimed that if the reported statements by Milley are true then the general should be “impeached, or court-martialed and tried.”

“So, there was no talk of a coup, there was no coup, it all never happened, and it’s just a waste of words by fake writers and a General who didn’t have a clue,” Trump said.

Given Trump’s continued insults against Milley, there is every reason to expect that Carlson will continue to launch into tirades against the general and make more baseless accusations against the military.

The unresolved question is what the consequences of Carlson’s attacks on the military and its leadership will be.

While it is reasonable for Carlson to question whether Milley has made correct decisions and if what he is quoted as saying is accurate, making Milley “a punching bag for the latest round for partisan warfare” is harmful to civil-military relations, said Peter Feaver, a political science professor at Duke University in North Carolina.

“It is saying that: We will only show respect to the military if they are fully embracing our partisan agenda,” Feaver said.

Carlson is also signaling that if military leaders try to remain apolitical to fulfill their constitutional obligations, Trump’s followers will unleash “a partisan fury” on them, Feaver said.

So, Tucker, maybe you should quit lambasting the Pentagon and go back to debating Jon Stewart.